The Year in Twin City Sidewalks: My 2011 "Heavy Eleven" Report

I'm a little late. You're supposed to do posts like this in the down-time leading up to New Year's. Oh well. Nobody ever side that sidewalks were the fastest way to get around.

I was lucky enough to be invited onto the Salon Saloon: 2011 Show a few weeks back, and it was a blast. Andy, Colin, and Shanai had 5 guests who'd appeared during the past year come back and share their ten or so 'best' and 'worst' from the past year. Together, we were... The Heavy 100.

#11) The biggest loss to St Paul: The Closing of Porky's 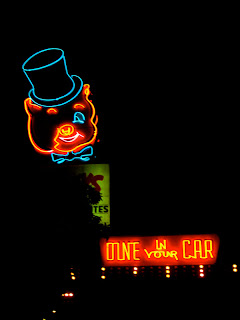 Despite my dislike of the 'drive-in' as a concept, Porky's was a special case. It was a very early, kitschy-beautiful example of the drive-in diner. It typified everything that Venturi et al described in Learning from Las Vegas, the classic "decorated shed," complete with the best neon sign in the Twin Cities.

On top of that, it was the heart of University Avenue's hot rod culture, which even though I don't understand or participate in, I could appreciate from a distance. At least here you had folks with cars who weren't constantly driving them, but had stopped them, gotten out of them, and stood around in the city talking with other human beings with their face. Street life of any kind is rare enough in St Paul. It's too bad to see it go.

Finally, I liked how it added an interesting element of diversity, of strange juxtapositions. Porky's was located directly next to a large old-folks home, which I always found amusing.

I wrote about this when it happened. Lots of folks blamed the LRT construction for Porky's closing, but it seemed in retrospect to be more about the owner just wanting to get out of the business. It's too bad. It would have been really interesting to see how Porky's adapted to the new light-rail street. (It probably woulda been a lot like a diner I visited in Seattle one time, which eventually transformed into a pedestrian-centered walk-up locale.) 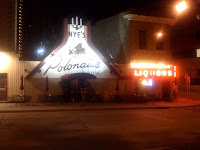 I told my "Ruth Adams story" on stage at the Bryant Lake Bowl, and this is probably the biggest loss to the City of Lakes over the past year. Nye's Polonaise easily boasts the most sheer character in the Twin Cities. While it will carry on even despite the loss of its actual characters, Ruth Adams was a treasure.

Sure, she wasn't a paragon of health. (What's the opposite of paragon?) But she lived for playing every weekend on the world's tinyest stage, in front of the world's crappiest dance floor, with the World's Most Dangerous Polka Band. I like to think that playing at Nye's was the main thing keeping her going.

She led a life filled with joy and polka, and everyone loved her. If they can say that about me when I'm gone, I'll be pleased.


#9) The most humiliating urban planning moment: The closing of the Block E Applebee's 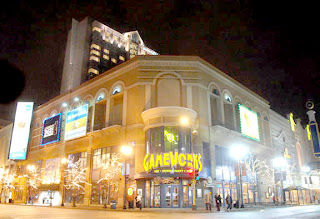 As I've written before, Block E is a classic planning fiasco, a bad idea made worse over time. As such, it's part of a long line of such bad ideas that mark the city of of Minneapolis like warts. And like the proverbial dead horse kick, Block E proved incapable of keeping even the world's most generic ubiquitous restaurant in business.

The Block E Applebee's was the exact opposite of Nye's Polonaise Room. Now there's nothing alive in Block E save for The Shout House (shudder) and (somehow) the Mrs Fields' cookies-bigger-than-your-head establishment. Someday downtown folks will figure out that cities can't compete with the suburbs by replicating them, but need to create unique, locally-owned, walkable places. Keiran's Pub is a good start.

Meanwhile, Block E sits on Hennepin Avenue like a hippopotamus at a dog show. 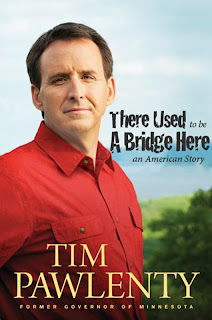 For most of my Twin Cities' life, ever since he took over as a House leader during the Ventura administration, Tim Pawlenty has pretty much been in charge of the State of Minnesota. He did a lot of terrible things. But, mostly, he spent that time calculating in the most Machiavellian way, exactly how to use his current position to craft an image perfect for higher office. And it seemed to be working, at least if you're a Republican. He made it almost to Vice-President during the McCain campaign, and was one of the "candidates" jumping out of the clown car this year.

It's amazing that so calculating and careful a politician could so completely fail. But he did.

I don't know if you remember, but the continual annual state budget deficits finally got caught up in the gears of broken politics  during the middle of the summer. Pawlenty's 'no new taxes' party somehow took control of the state legislature, while an aging "classic liberal" failed Senator somehow won the Governor's office.

(He won by the slimmest of marigins, by the way. If Emmer had managed a few more votes, we'd have had a political summer very similar to the one over in Madison, WI.)

I fear that this summer's shutdown wasn't an anomaly. This kind of political 'blue screen of death' is going to happen more and more, as both parties struggle with a changing economy and a lack of resources. Failures at larger scales will force cities and counties into all kinds of budgetary contortions. (See, for example, the next item on the list.) Expect more of this in the future! 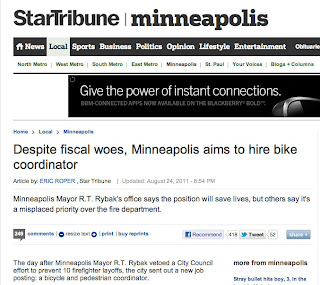 "Bikelash" is a term that refers to the "backlash" against the "bicycle." This, too, is likely to increase in the future, as bikes become more popular, gas prices rise, and cities struggle to maintain existing road infrastructure.

Minneapolis is pretty good for bikes, so this bikelash moment was a bit surprising. The city firefighters, facing cuts, singled out the new "bicycle coordinator" position as a classic example of government waste. And the Star Tribune backed them up, penning a short-sighted column against the need for such a position within Public Works.

Well, especially in times of economic hardship, Public Works desperately needs to focus more attention on non-motorized transportation. Unfortuantely, most transportation engineers aren't really trained in how to build anything that isn't solely designed for the automobile. Thankfully, the City Council didn't take the bait, and the city recently announced their new hire. 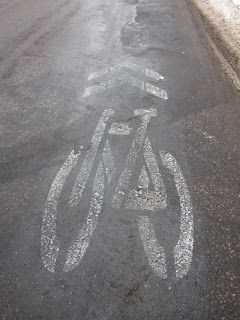 Meanwhile, over in St Paul, things didn't go as smoothly. Bike v. car politics came to a head in the most car-centric part of the city, as the city (with support from Federal dollars devoted to non-motorized transportation) sort-of kind-of attempted to build a bicycle boulevard through Highland Park.

It didn't go so well. Even the first, most basic part of the project -- the painting of "sharrows" -- turned into a political football, as ex-CM Pat Harris objected to the expense and waste of the triangular paint. He demanded that Public Works NOT paint sharrows along his part of the route, and got his way. Except that someone in the painting department didn't get the memo in time, the sharrows got put down on the street, and then someone had to go BACK over the street and 'un-paint' them, covering them up with some sort of black substance.

Well, there was a delicious moment of schadenfreude when the final black substance disappeared, and the sharrows re-emerged to embrace the sunlight, declaring that this was indeed a "bicycle friendly" street (even though nobody really notices them or cares that they exist).

This is obviously still going on. I wrote about this extensively, but for a time there was an attempt (which I found quite admirable in its magnificent foolishness) to link the Vikings stadium to a Block E casino downtown.

Both are epically bad ideas. It's fitting that they wanted to be friends. Enough said.

I loved this event this summer. It took a huge amount of arm twisting, meeting attending, and good luck to make this happen. Many business owners, bureaucrats, and politicians were very wary of doing an event like this.

But Minneapolis proved to have enough mental flexibility to try something new, and it worked beautifully.  Now every neighborhood wants one. Look for more Open Streets to come.

72 days. Happy Kardashi-versary Manny and Mark! You just got married, but you can already celebrate.

Meanwhile, to Aunt Peg and Uncle Bob up in Edmonton, Happy 522th Kardashiversary!


#1) The most intriguing but enigmatic political event: The Occupy Movement

Let's hope that someone, somewhere keeps occupying something in Minneapolis and St Paul.