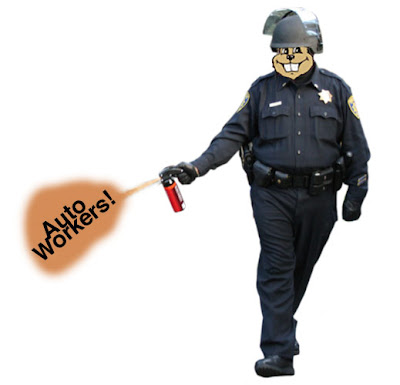 You may be familiar with the fact that the graduate student workers at the University of Minnesota, myself included, are attempting to unionize (for like the 5th time or something). We recently filed union support cards from a majority of our bargaining unit with the University in a (futile) attempt to have the University recognize our union without going through the onerous and expensive election process.

Well, that didn’t happen. Instead the University of Minnesota, while being ostensibly “neutral” on the question of support for organized labor, is waging a subtle disinformation campaign.

Easier said than done! Being subtly anti-union while pretending to be neutral is actually quite tricky. It requires careful wording, a very particular posture, and lots of editing.

For example, through my sneaky contacts in the Department of Parking and Employee Condescension Services, I’ve managed to get my hands on an early draft (!) of an email sent out to all the graduate student workers on campus, attempting to dissuade them from supporting the union. Nobody else has this information, folks. It can only be found right here!

(The original email can be found here. The union's response to the misinformation is here.)

On January 16, a bunch of ungrateful trouble makers who don’t know how good they have it University of Minnesota graduate assistants filed cards with the Bureau of Mediation Services beginning a process by which all current graduate assistants will decide whether or not to become members of the United Auto Workers of America who build cars, with their hands, in factories. Like, in factories. Cars. Big boxy unreliable cars! You may remember the city of Detroit? Those were burly men with mustaches who built cars in giant belching factories, which is about as far from the pleasant tunneled confines of this halcyon university as you can get. While we were asked to recognize the union without a vote which caused us to laugh so hard that milk came out our nose for a second, we support “the election process” the election process, which is required provided by law and allows all graduate assistants an opportunity to be arm twisted and frightened into freaking out about the idea of auto workers vote. It is important that each of you individually, without consulting any of your so-called friends, participate in this election because those who vote will determine the outcome for everyone in the group. You are free to vote against for or against union representation, especially if you regardless of whether or not you signed a card. However, if elected, all graduate assistants will become members of the United Auto Workers of America who make cars with their hands in giant factories in Detroit where there aren’t any jobs and the crime rate is super high and people die and its basically a ghetto which is what Minneapolis will become if you vote for the union, and all will be required to sell your soul pay union dues.

It is critical that you listen to your Gopher representative from University Relations and the official Director of Parking and Employee Compensation stay informed as we move through this process. The state's Bureau of Mediation Services will determine the list of eligible voters as well as the details of the election. We will tell you to vote against the union communicate this information to you as soon as it becomes available. We also will continue to update our online frequently asked questions as needed. If you have questions or concerns at any time during this process, please email ohr@umn.edu.

Thank you in advance for your participation in this stupid waste of time that is dragging down our important research activities and forcing us to hire expensive lawyers to destroy hopes and dreams instead of becoming the top 3 public research university in the world important election. Resistance is futile. Go Gophers!

PS: It's worth pointing out that the UAW represents more graduate student workers in the US than any other union, including grad workers at the Universities of Washington and California.

this is brilliant. thanks, bill.

i love this more every. single. time. i. read. it. genius.

Thanks for the amazing post..Excellent information.
We takes care of all needs to maintain commercial properties in Winnipeg. We are committed in providing superior snow clearing and lawn care services to all our customers using high-quality equipment.
Best snow clearing Winnipeg
Winnipeg lawn care services
Property Maintenance Winnipeg