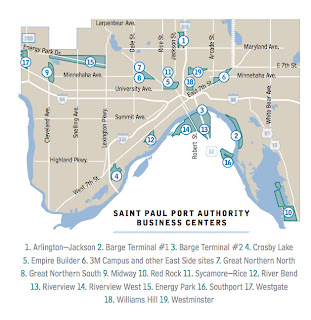 Why it's dumb: Suburban-style buildings with parking lots and single-story, single-use auto-centric buildings right in the heart of the city.

What they were thinking: I chatted with a knowledgeable planning professor at the University about each of these decisions to get a perspective about why planners and developers might have made the decisions they did. I learned that the St. Paul Planning Authority development was all done on old railroad land. S/he said that back in the 60s and 70s the kinds of developments they built were very ordinary. However, s/he said the SPPA stuff along Phalen Corridor stuff is far better, while the development along Plato Boulevard is also rather boring and pedestrian (i.e. anti-pedestrian). Finally, during the 60s through the 90s, the only kind of development you could get financed by the banks was this sort of basic suburban style stuff, even if it was located in the middle of the city.

My take: This was a surprise candidate. And in retrospect, this might not seem so bad. But I think you’ll find that, as time goes on, and as University Avenue becomes a dense transit corridor, the St Paul Port Authority’s low-density development and office park style parking lot-centric one-story fabric won’t be doing much to help revitalize anything, and will prove to be a difficult area to connect to the rest of the city.

The Saint Paul Port Authority is a mysterious entity, and to be honest, I don’t know that much about it. What I know about port authorities comes from Robert Caro’s famous book, The Power Broker, where you learn that the Triborough Bridge and Tunnel Authority was the bureaucratic loophole through which Robert Moses’ drove his fleet of bulldozers. Authorities, in that light, seem to be public/private institutions that can take out loans and raise money for a specific purpose, which is usually associated with economic development and revitalization.

Compared to Moses’ notorious megalomania, the one in Saint Paul is sweetness and sunshine. They have the unenviable job of figuring out how to re-use vacant industrial land in Saint Paul, to retain and grow industrial jobs in the city, and to get economic development flowing the most difficult problem areas such as the old 3M Campus on the East Side. Any one of those things is a problem of windmill tilters, and so far it seems the SPPA has done a good job with them. (For example, the Phalen Corridor project is really nice, in my opinion, and has some density and mixed-use characteristics that would make any planner jealous.) 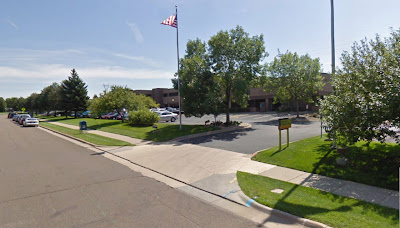 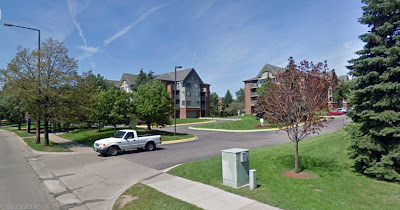 [The car-centric townhomes along Energy Park Drive.]
But, that said, some of their older development is woefully lacking in good urbanism. For example, take the Energy Park corridor, which is a large stretch of the city that used to be rail yards and that includes the large Bandana Square complex. There are a lot of great things about the industrial / residential development that went in along there, including the environmentally efficient shared steam generation and the general idea of keeping jobs close to large population centers.

But the residential development along Energy Park wouldn’t be out of place in suburban Shakopee. Its separated from the street by a moat of parking lots and berms, and has that culs-de-sac maze dynamic whereby only those who know where they’re going can find where they’re going. Plus, the Bandana Square “festival marketplace” shopping mall, after a brief run of occupation in the 90s, turned out to be a bust (“office center”) and is now only home to a clinic and the Twin Cities Model Railroad Museum. To my mind, the Energy Park area represents a missed chance to create a real urban space.

[The Westgate Business Center on the Minneapolis border.]
But that’s not even the SPPA development that really irks me. That honor goes to the Westgate Business Center developments along University Avenue up by the border with Minneapolis. I’m not sure when these were built, but they look like a similar mid-90s development. They have the same one-story parking-lot-moat qualities that you’ll find in any suburban industrial office park. The problem here is that they’re located along University Avenue, right at the apex of one of the city’s premiere transit corridors.

Maybe this kind of development looked good when it was built, but in ten years when University Avenue is crawling with people and there’s a nice train running down the middle of it, all this sprawled out parking lot land is going to be a what Jane Jacobs might call a “great blight of dullness.” So, despite all of their good work, despite their industrial accolades, the Saint Paul’s suburban style developments get the #10 Planning Blunder award.

[The Westgate development would fit right on on Woodbury's Radio Drive.]
Posted by Bill Lindeke at 2:08 PM

Excellent #9! I especially laugh at the bus stop on the eastern-most part of the Westgate development. There's a huge retaining wall behind it with no stairs to speak of. You get to walk a block in either direction just to get up to the parking lot moat.

I much prefer the LRT-accessible location of the Hennepin Overland Railway Historical Society: