[Part Three of a series whereby, either through coincidence or nostalgia for breakfast, I steel myself determined to delve into the odd convergence of three foodstuffs and their history-laden packaging. Bear with me, and I think you too will be struck by the uncanny dignity of American canning. This content recycled from my now mothballed website, excitablemedia.com.]

Oatmeal? Salt? I'm kidding myself. We all know that breakfast is just an excuse for coffee, and my coffee of choice for years now has been Chock Full o' Nuts (CFON) coffee, a brand I've been drinking ever since college when the NYC skyline printed on their tin can pulled me forward like flies to a porch lamp. And I've been orbiting Planet CFON ever since.

[CFON cylinders, old and new.]
Just like Seinfeld's bit about Grape Nuts, there are no nuts to be found in CFON. The odd name traces back in fact to the humble beginnings as a nut store, started on the corner of Broadway and 43rd Street in 1932 by a man with the fabulous name of William Black.

But in a case of Bill Black's bad timing, the hard times of the Great Depression cut nut consumption almost in half, and ever flexible, CFON changed into a coffee shop and expanded outward, Starbucksing themselves into the dominant NYC coffee player, with the five boroughs boasting over 100 stores by 1950. CFON demand grew so quickly that by the mid 50's, the company decided to go national with their own line of cylindrically canned coffee. Taking a page from the religious connotations of the Quaker playbook, they launched what would become a famous national marketing campaign. Their famed jingle:

The jingle, along with the coffee can's widely recognized taxi-cab coloring, was developed by a Chicago advertising firm, BBDO. Now I couldn't begin tell you why Chicago is the home to so many cylindrical containment landmarks... Perhaps it's the flat flat landscape, or the way in which the Lake Michigan shore arcs through Wisconsin, Indiana, and Michigan, or the lasting influence of Mr. Ferris's wheel... But whatever the reason the Chicagoans have been on the cutting edge of marketable canning.

[CFON's current ad campaign.]
New York's most obvious consequence of the boom-boom 90's is the dramatic procreation of NY Starbuckses, which went from a mere dozen Manhattan stores in 1994 to over 250 five years later. They're now the largest chain of any kind in the five boroughs, and at certain coffee-dense places, [for example the village station on the 4/5 line…] you can go into a Starbucks, sit down with a coffee, and watch people enter and exit the Starbucks across the street. All this coffeefication inspired the good folks at CFON, and they've recently started trying to compete with the Seattle carpetbaggers, opening a number of stores throughout the city and posting a new series of ads that proclaim their coffee, "Full of NY Flavor."

Having lived there and worked in the Manhattan food service industry, I know know the full meaning of "NY Flavor," and so I'm a bit skeptical about the possibility of a CFON resurrection. Instead, I can only say "Best of Luck, CFON!" Give it the good ol' college try.

It's long been a staple food of my imagination to think about how advertising, more than anything else, is the hallmark of cultural change in this country. Art or literature, which often claim to demarcate the age, seem to easily leap across generation gaps. I.e., you can read Fitzgerald without straining yourself, people still watch M*A*S*H every night, movies from the 70's can still seem current, and most visual art seems not to have aged much in the past 50 years. We can appreciate all these media without feeling a particularly heavy dose of culture shock.

But the pace of change in the advertising world is more rapid, and ads from even a few years ago feel antiquated and obsolete. It's advertising, even more than fashion, that throws our ever-changing cultural zeitgeist into full relief. And perhaps that explains the often eerie feeling you get in older urban districts. For example Saint Paul's University Avenue, which hasn't changed appreciably since they put in the freeway, makes me almost giddy. Walking along this old-school main street provides ample example of nostalgic signage, like the store that declares in simple blue and white, "Saint Paul Meats," or the giant Sears' store at Marion Avenue that time clearly forgot.

In the same way, these three cylindrical remnants of ancient advertising campaigns are remarkable. The Morton's "Rains it pours" slogan and the "Nuts" in CFON have lost all of their original meaning. They now stick out surrealistically from our grocery shelves. And the fact that they're becoming popular again, at least in the cases of CFON and PBR, while it might eventually kill the authenticity, is also doing a great deal to resurrect some sort of American historical sensibility. But at least for now, you can still eat and drink the past for breakfast. 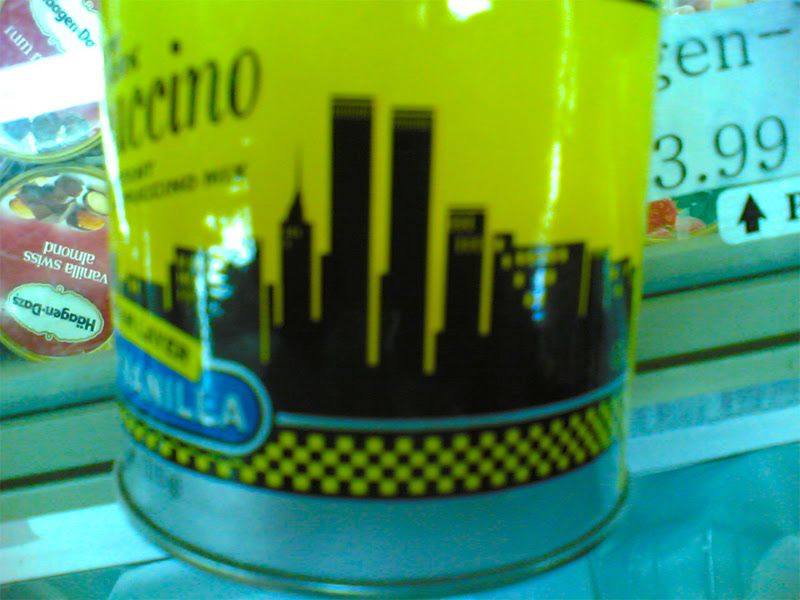 [The Manhattan skyline on the CFON can's side proudly displays the Twin Towers, and after 9/11 the good folks in the CFON boardroom made a point of stating that they'd keep the towers in the picture, kind of a posthumous tribute, a la the noble logo of the FDNY.]
Posted by Bill Lindeke at 2:35 AM

It will not really have effect, I feel like this.