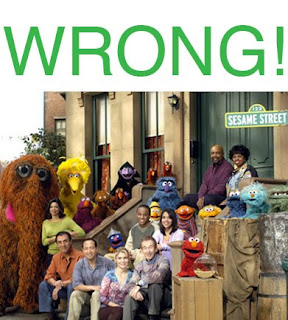 [Sesame Street is a bad model for public space. This degree of intimacy and community would be insufferable for just about anybody.]
Often, when I talk to people about the value of sidewalks, I will get into arguments about how much intimacy is appropriate in cities. People assume that, because I want to see more public spaces where different kinds of people ‘share space’ with each other, that I want everybody to hang out and be friends, chatting, singing songs, playing games, and sharing stories. You know, like a Sesame Street episode.

For example, I was talking to my sister the other day about why skyways suck. As we walked along 7th Place in Downtown Saint Paul, I pointed out how cool it was that the homeless people hung out at one end of the block, and café diners hung out at the other. They were sharing space, I said, and it was good for both groups to be coexisting with each other.

“So, why didn’t you stop and talk to the homeless people?” my sister asked.

“That’s not the point.” I replied after a pause. “I’m sure that would have been terribly uncomfortable for both of us.” 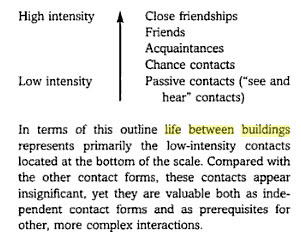 [Jan Gehl's excellent (and hard to get) book, Life Between Buildings, is all about the importance and maintenance of these impersonal, public contacts.]

Similarly, when I talk about the importance of ‘neighborhood’, I don’t mean that everyone on the block should be best friends, hanging out with each other all the time. No, that would be a commune or a cult, and would surely end in some sort of FUBAR reign of terror.

Rather, public life and public space are kinds of interactions where you communicate in ambient, diffuse, and subtle ways. You can learn a lot about people just by watching them. And when enough people start to share the same streets, parks, grocery stores, libraries, etc., you begin to create neighborhoods and communities. This is particularly useful if these communities include different kinds of people, from homeless to haberdashers, from vagabonds to Vulcans. It doesn’t happen because people are all friends, sharing names and stories and intimate details. Rather, ideally, it happens when people share space. 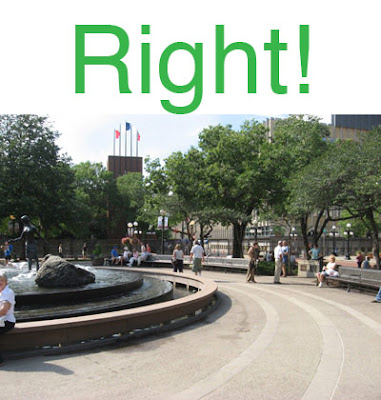 [The fountain in Saint Paul's Rice Park is a great public space because it allows people to share space without interacting.]
Posted by Bill Lindeke at 11:33 AM

In the "Great Good Place," Oldenberg emphasizes the importance of neighborhood parks, shops, cafes, and yes even bars, in supporting social life. Again, the point isn't that you're great friends with everyone. The point is that you have the chance to run into people, often the same people over and over, and develop a passing aquaintance that builds the neighborhood's capacity to deal with issues (whether it's as simple as needing to borrow sugar or keep an eye on a hosue while you're on vacation, to organizing to clean up a park, form a neighborhood watch, or watch each other's kids when they walk to school. Oldenberg describes a tytpical real situation at a park where parents know each other's first names and chat, but don't invite each other to their homes. Such interaction seem much rarer on that suburban shared space, the cul-de-sac.

Secondly, these chances for interactions allow us to make friends (remember when we met people face to face rather than on-line!) When I lived in one smaller city, about half my firends were people I met at a neighborhood coffeshop. It didn't mean I talked with or liked everyone who frequented it, but some became acquaintances and others became great friends.

This I think is the value of social spaces in the city. So yes, do talk to those people you run into!

Something bugs me about this, and it probably goes to the heart of why urbanity bothers me in general. There seems to be something inherently wrong about the idea that people should be a part of the street furniture in your surroundings.

I understand the psychological need to narrow the scope of your relationships in an urban area. You can't relate personally to that many people. Still, it is all too easy under those circumstances to devalue those who are not like you in the same way that thoroughly rural communities (or multi-generational Bostonians) speak of "outsiders."

I'm not willing to say any environment is idyllic in that sense, but it seems to me that environments that force you to make that choice on a daily basis are not as ideal as most planners make them out to be.