Which Twin City is Which Lame Republican? (A 2008 RNC Poll!) 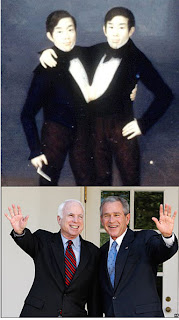 [The famously conjoined twins, Cheng and Eng Bunker, George W. Bush and John McCain. (Bush and McCain are the ones on the bottom...)]
I'm sure you're all aware that the greatest detail slipped into Hillary Clinton's speech at the '08 Democratic National Convention in Denver tonight. She tied together McCain and Bush in the worst of all possible ways, joining them forever at the hip. She made the most ironclad of comparisons, a metaphor so tightly wrought that John Henry himself could not drive steel through its well welded joints. It was a simile so smart, Einstein himself would have admitted no relativity into its interpretation...

What did she do?

Yes, that's right! She compared McCain and Bush to the Twin Cities of Saint Paul and Minneapolis...

[Last night's episode of The Hills.]

The comment was met with uproarious applause, volumnious cheering! And all because of the twin-ness of our fine Twin Cities.

To compare Bush and McCain to Saint Paul and Minneapolis is to speak of the twinniest of twins, two people so alike that they could be a matched pair, so alike they could be separated by a river, two cities forever coupled like monogamous penguins, two cities joined like the twin suns of Tatooine, two cities locked like Yin and Yang, entwined in the kind of long-lasting embrace reserved for Rodin sculptures...

Yes, Hillary Clinton's speechwriter hit the nail on the head when he or she drew a line from McCain to Bush to Saint Paul to Minneapolis. After a metaphor like that, there's no way that the GOP is winning this election. Nobody would want to vote for a Minnesotan city.

In fact, only one question remains:

Is Saint Paul McCain because of its advanced age? Or is it George Bush thanks to its economic ineptitude, its provincial backwardness, and its obvious willingness to sell itself out to every right wing road show that rolls through town, from Norm Coleman to Randy Kelly to the RNC (OMGWTFGOPBBQ) 2008?

Or is Minneapolis the real John McCain, a self-styled maverick who will say anything to be part of the cool kids clique? Or, on the other hand, does Minneapolis make a mean George Bush, the city whose skyline juts above the prairie like a Foshay Tower, preening before the cowering masses, a city so self-important that it can only live in a bubble?

I welcome any comments you may have, dear reader. Please tell me! Why is Minneapolis or Saint Paul exactly like George W. Bush or John McCain? (Should you need any ideas about how these two Twin Cities are so eerily similar, check out these two previous posts.)

Stay tuned, I will have several suggestions tomorrow! In the meantime, take the poll! 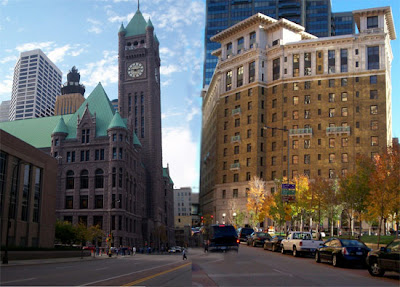 [The twin skylines of Minneapolis and Saint Paul, separated only by a roadway. Which is more likely to clear brush?]
Posted by Bill Lindeke at 10:26 PM

putting aside politics (difficult, but possible), how about this:

bush is st. paul, stodgy and sure in his image, no matter how much other folks (or, perhaps, sister cities) mock or question his beliefs and actions.

mccain is minneapolis, the "original maverick," the cosmopolitan strutter who's a little hipper, sure, or at least pretends to be, but is dedicated more toward impressing and perpetuating any number of images outsiders have, regardless of the truth.

or maybe i'm just overthinking this.

I like it. I think you may have closed the deal.

Economic ineptitude actually is the purview of Mpls (continued budget deficits), more than St. Paul (balanced budget). And class is probably a better descriptor of St. Paul, over stodginess. It's older, more graceful by far. More law abiding and genteel. Less flaky, less apt to wipe its cultural heritage off the map for new construction. St. Paul (or at least parts of it) are dominated by southeast Asians (see University Ave). St. Paul is obviously John McCain (and Mpls Bush by default).

BTW, you fucks from Mpls really need to get out more often.

Based on the anon post, looks like Bush is St. Paul as both supporters feel the need to extol whatever qualities each has at all possible moments. Feelings of inadequacy anyone?

RE: BTW, you fucks from Mpls really need to get out more often.

Where does this anger come from? Inferiority complex?

I love Minneapolis and Saint Paul.