[Clearin' brush -- Q: What has 28 legs and crawls stumbly down the street? -- Taking a pass on passing by -- Finger pointing -- Forgotten post on forgotten spots -- A triptych] 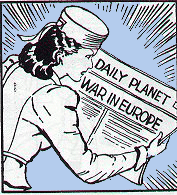 Sidewalk Rating: Blowin' in the wind

Hello! Sorry about the prolonged absence. It's super windy today, so when you're out on the sidewalk be sure to adopt a wide stance! Biking, too, has become rather Sisyphean. It seems like each time I get to the top of the hill, I roll back down.

Enjoy August while it blasts.

...people are encouraging you to take responsibility for your sidewalk.


A: The PedalPub of course. Not long after writing about it a while back, I was sitting on a porch on Saint Paul and heard this commotion out the window. I looked down and saw the PedalPub doing laps through the neighborhood. Cars slowed down before eventually, carefully, going around it. And people sure seemed to be having fun!

(My video capabilities are terrible!)

Incidentally, it turns out the hullaballo over quashing the PedalPub in Mpls may have been overstated.

I'm not so sure about this tempest in a teapot, which in my book tries to turn sidewalks into a Taylor-ized dystopia of rules and regulations. Why can't I stroll on the left, if I want to?

There's an interesting study that I read a while back (in David Ball's book, Critical Mass) that models how people walk along passageways. Invariably, people form 'lanes' by following others who are moving in the same direction. It happens all on its own, just because people like to follow each other. We hardly need to legislate it.

(That said, it reminds me of the droitwich.)

[Looking through windows of wig and nail shops in downtown Minneapolis.]

This story about the possible demise all the businesses on the Nicollet and 6th (?) block is kind of depressing

Kwang Yu, owner of Shins Alterations, and Kim Tran, owner of California Nails & Hair, said they would soon have month-to-month leases. Tran has operated out of the building for the past eight years. If she moves a block east she thinks the business will die, and she said it’s too expensive to move a block west.

“I want five more years,” she said. Tran also opened up Global Gift in the building’s vacant Marquette Avenue space two years ago, selling colorful marble pieces. She installed a new ceiling and wall paneling that covered holes in the plaster, and she doesn’t think she will recoup her investment now.

The owners of Hell’s Kitchen are already looking for new space Downtown.

“We don’t even know if we’re moving,” said Cynthia Gerdes, co-owner of Hell’s Kitchen. “We were asked to start looking for space in case we had to move. .... We contacted everybody Downtown about possible spaces.”

Janice Lee, owner of Lee’s Wigs, said she is “just floating” for the moment. At the request of the building manager, she closed down her corner shop at the end of 2006 and moved to the middle of the block. She said the property manager wanted to install a coffeehouse on the corner, but the space is still empty.

That block houses the most interesting downtown retail in Minneapolis. I urge anyone to go and visit the places before they're gone.


An old MnSpeak thread about "weird Twin Cities" includes an excellent shoutout to the Hulk Hogan's Pastamania awning at Cedar-Riverside:

What's the weirdest place in the Twin Cities? The bridge to Dimension Zed over I94 is a good candidate, but as a signage freak, I also have to like the awning for Hulk Hogan's Pastamania! on an empty storefront near the Cedar-Riverside apartments. It's also quite strange to see the Grain Belt Beer sign along Hennepin (and frequently gracing the header of MNspeak) stand so prominently within eyeshot (oh, but it doesn't face the school!) of the De La Salle school. And, without making the grave mistake of burying everyone with selections, I will put this list to rest by mentioning the most aptly named location in the area: the "Joy Free Cemetery" in Rogers. 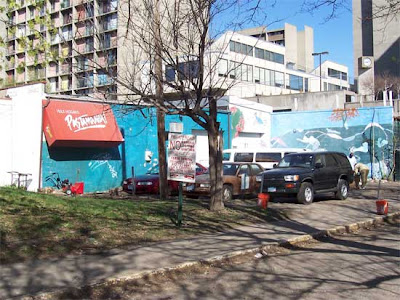 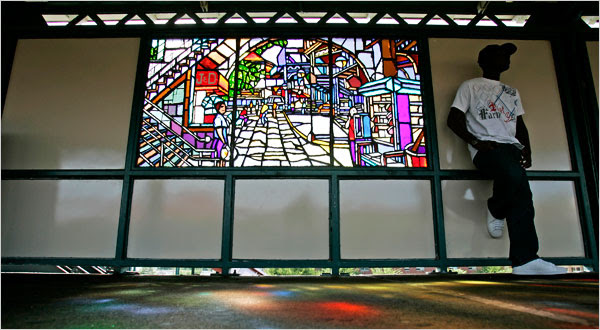 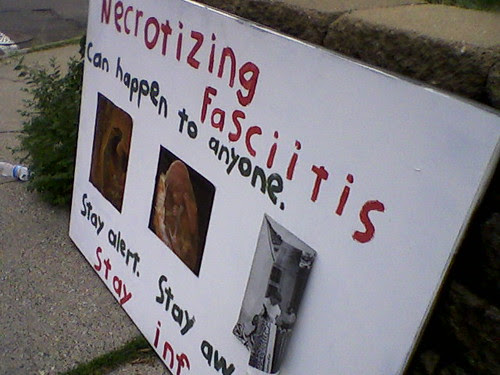 The sidewalk lanes reminded me of when I was in Australia, where people walk on the left side of the sidewalk. I did that awkward mirroring each other move every time I had to pass someone.