The Met Council are a bunch of bums 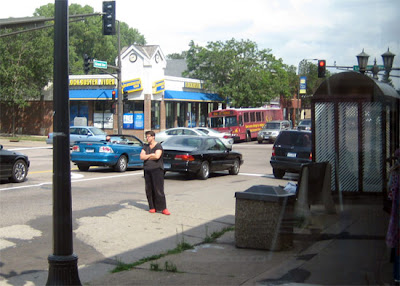 [A bus rider standing impatiently in the street while waiting for the #63 bus in Saint Paul.]

I didn't want to write this post. You'd think that now, of all times, our progressive state government would be trying to prepare for the future. Oil prices are at all time highs, and promise to get much, much higher. All the signs point to the fact that climate change is happening faster than ever, and we live in a society that spends vastly too much of its energy on transportation costs (consuming 25% of the world's oil production). Now, more than ever, we should be trying to get people out of gas-guzzling, carbon-spewing cars, and into more sustainable modes of transportation.

Yet, I read today that the Met Council (predictably) raised city-wide transit fares, at this moment when people have reached a tipping point, and are more willing than ever before to consider sustainable transportation:

Bus and light-rail riders will have to pony up another quarter starting Oct. 1 after the Metropolitan Council voted today to increase fares to combat rising fuel prices.

Another 50-cent jump is possible next year.

Opponents have said the increase will hurt those riders already struggling to make fare, as well as riders on Metro Mobility, a service for people with disabilities, who will now have to pay 50 cents more per trip.

The fare increase is meant to erase an anticipated $15 million shortfall in Metro Transit's 2009 operations budget.

Mary Hill Smith, head of the transportation committee, said her group tried to balance the needs of riders and the Metro Transit budget when proposing the hike.

"I don't think that any of us are particularly happy to raise fares now," she said. "I hope the community at large understands this is something we do with a heavy heart."

With high gas prices and a slow economy, transit should be as affordable as possible. Further, there are alternatives to raising fares. Options include:

All of these ideas are alternatives that would shift the structural landscape within which we all make choices every day.

The government has a hand in all of these questions, and considering the huge expenditures for energy costs, pollution regulation, conservation initiatives, and freeway construction, and policing, the amount of money that state and regional governments throw towards the transit system is really small potatoes.

That's why I love Roseville State Senator John Marty's almost-competely-ignored proposal to drop transit fares down to 25 cents. Here's what he wrote:

The cost is not as much as some would think. Cutting fares for Metro Transit from the current $1.50 to $2.75 down to a flat 25-cent fare for buses and LRT would obviously reduce fare-box revenue. But the public already pays well over three-fourths of the cost of the transit system, so lower fares take away only a small portion of the revenue. In fact, with the jump in ridership, the public cost of each individual ride would drop significantly. (A bus or rail car costs virtually the same amount to operate whether it has 15 or 50 passengers.)

Alternatives to this proposal are not cheap. The Met Council's proposed fare increase is projected to bring in about $7 million more per year. Even so, it projects a revenue shortage of $30 to $40 million per year by 2011. On top of that, the cost of expanding roads and highways to handle the growing congestion has a price tag in the billions, not the millions that transit improvements and fare cuts would require. Also, this cost analysis excludes the environmental costs of driving more cars and building more roads. The 25-cent-fare proposal would ultimately save taxpayers money.

There are other benefits of the 25-cent fare. It would provide much-needed savings for low-income people struggling with high food and energy costs. The enhanced service to handle the surge in passengers would make it easier for seniors and others who rely on transit to get to their doctor, the store, their church or wherever they need to go.

This proposal reminds me a lot of another failed proposal that would have reduced the New York City transit fare down to ZERO dollars, in exchange for a toll on private cars running through midtown Manhattan. 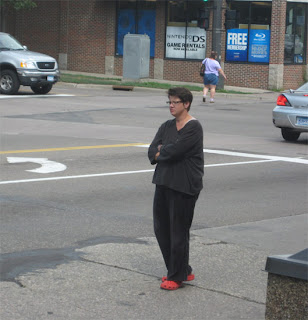 Maybe I'm hopelessly naive, but Marty's proposal would seem to me to be a move of political genius. You'd trade a few griping "taxpayer's league" folks for a ton of new, urban riders on the city's transit systems. It would greatly please all the environmental, poverty, and energy constituencies, at the expense of a few state dollars.

And, that's why, of course, the Met Council had no interest in keeping the lid on transit fares. The entire council is stacked with Pawlenty appointees, and he can remove them at will. They know where their bread is buttered, and trading the Met Council "rainy day fund" for a little State Budget breathing room is a terrible move for a Governor who has been hell bent on maintaining every possible political advantage.

Unfortunately, at the moment, we have a state executive who does not have the state's best interests at heart. That extra quarter is going to sit heavily in my pocket for the next six months. Meanwhile, the #63 bus schedule was slashed a few years ago, part of Metro Transit's periodic budget cuts. How long will we have to wait until our government starts making sense?
Posted by Bill Lindeke at 7:59 PM

Let me vehemently second both the sentiments and the ideas here. I'm still bemused that after the bridge fell down we didn't have a major push for funding shifts, or any meaningful accountability.

We have a progressive state government? Minnesota, right?

John Marty's idea is solid. The zero dollar fare idea is terrible. Nothing would kill transit faster than people knowing they can take any bus one block for free. A quarter would get it done.

well, we did at one point. things MN has done that I am proud of include instituting Local Gov't Aid regional taxbase sharing, having strong state health insurance programs, forming the Met Council (though neglecting to have the members elected by the public), and declaring the Blueberry Muffin the official state muffin.

I guess I agree with you about your second point. Actually, I think $1 would be a great price to pay for transit. People easily understand it, and would be happy to pay that amount. It would double ridership very quickly, which is a goal that many legislators say they'd like to achieve.

Frankly, reducing our energy consumption in any meaningful way depends on a move like this. Raising fares right now is a sign of that we're living in a podunk society.

Bill Lindeke said...
This comment has been removed by the author.
11:38 PM

Peter Bell should have stayed in the chemical dependency field, for which he had academic training. His work beyond that has been little more than shilling for corporate-driven politics and connecting with the right (pun intended) Republicans. Bell has no skills in public policy, and the Metropolitan Council is an embarrassment for Minnesota government. PLEASE Mr. Bell, become Pawlenty's veep committe chair! Go to D.C. and never return!

One piece of good news for you... the 63 is getting a frequency boost in September.

that is good news. the bus runs infrequently these days, and the grand av. corridor has a lot of transit potential, i think.

A friend who is moving to Austin TX told me about the bus fares there:
http://www.capmetro.org/riding/fares_2.asp
Amazing.