Sidewalk of the Week: Carter Avenue 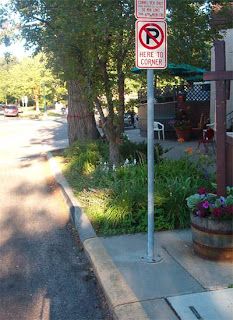 The gold standard for Twin City sidewalks has to be the corner of Carter and Como Avenues in Saint Paul's Saint Anthony Park neighborhood. These folks here have pulled out all the stops, and have turned this intersection into one of the nicest, most interesting, most relaxing places to sit around, drink a coffee, read a book, and enjoy being outside in a Twin Cities neighborhood.

Sure, its "a little yuppie disneyworld fantasy", as a friend of mine says, but even so, its a good one. It boasts a little wine store, a pottery shop, a bakery, a coffee shop, a local bank, a hardware store, a post office, a Bibelot shop, a Carnegie library, a restaurant, and one of the last rem 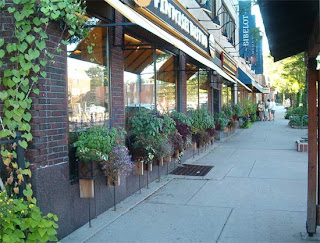 aining independent bookstores in the Twin Cities. All these things are woven together with a series of sidewalks, benches, flowers, and (glory be!) brick patches inset into sidewalk along each corner. Not only that, but the neighborhood's relatively cut off status, trapped between freeways, train tracks, and campuses on three of four sides means that there's very little traffic going by on the perfectly sized streets, streets that aren't even on a linear grid thanks to the rare bit of Twin Cities topography. The landscape, like the infrastructure, charges the experience of this space 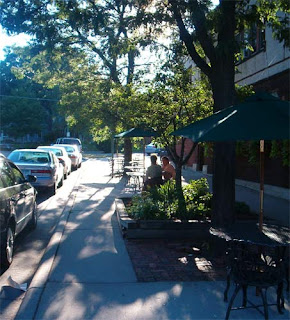 with unexpected angles. So instead of streets built for cars, on Carter Avenue its mostly people that you encounter... people strolling around and going from here to there, sitting, waiting, walking dogs, going out to eat, and window shopping.

I just spent a half hour sitting on the bench here and watched old couples, families with little kids, and a matte black beater full of white T-shirt punk rockers who sat one bench over. The only thing this neighborhood really lacks is a certain amount of income diversity, but high property values are the unfortunate effect of gorgeous sidewalks. But the University of Minnesota's Saint Paul campus isn't too far away (nor is the theological seminary), and I think there's a fair amount of student housing scattered amongst the well-to-do. Finding Carter Avenue is like finding a photograph of your long lost best friend tucked inside a book pulled randomly off a shelf, and during these long summer days there's no better place to sit and remember. That's why you, Carter Avenue, are this week's Sidewalk of the Week.

speaking of sidewalks . . I am noticing that more adults are riding their bikes on the sidewalk. My dog and I are worried that we are going to get run over. Why do people do this?

My friend's wife recently has taken up bike riding (she hasn't biked since she was a child) and rides on the sidewalks because she doesn't yet feel comfortable riding on the street--even streets that have bike lanes painted on them.

So, I think, most people ride on the sidewalks because they feel safer than on the street (and I don't blame them, drivers are nuts).

To address this, perhaps we could encourage our local elected officials to do a better job in painting and maintaining bike lanes (take a look at fairview avenue for an example of an unmaintained, and somewhat unsafe, bike lane.)

In Europe, they have bike lanes that are actually part of the sidewalk, separated from the car traffic by a curb and a few other things. It makes biking a piece of cake, and practically worry free.

Of course, they have really wide sidewalks, so its much easier to do over there. (I'm thinking of Berlin and Amsterdam.)