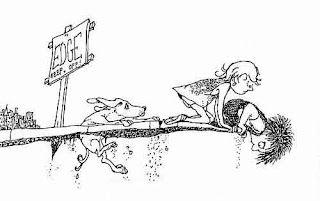 Hi, and welcome to the first installment of a new segment here at TC Sidewalks... Principles of Sidewalkery (POS). For today's POS, we're going to springboard off of a number of new happenings in the sidewalk community and look at walkability . Earlier this week I learned about a new website, WalkScore, that uses Google Maps to measure the walkability of neighborhoods according to how many commercial locations are nearby.

While its seems the website is having a few technical problems, it's a neat idea. And it broaches the question: What exactly is Walkability?

I also wanted to share with you a snippet from a recent comment thread on local clearinghouse gristmill, MnSpeak, the other day that caught my eye, having to do with Minneapolis's new downtown transportation plan, and the federal dollars that are coming our way:

There are problems with the plan, I'll admit, but I don't think that more mega-ramps are the answer. The mega-ramps are an idea stuck in the 80's, when downtown was conceived of primarily as a 9 to 5 workplace.

Now, when we think of downtown as a round the clock destination, and when we look to developing the neighborhoods surrounding downtown, it's important that people using all modes of transportation be able to move in and through town.

And taking the buses off of Nicollet Mall is a bad idea propogated by people who don't ride the bus. Hennepin Avenue doesn't have the capacity to handle all of those buses, as evidenced by the condition of bus traffic during Nicollet Mall reconstruction (and will have even less capacity when they convert it to two way traffic). Moving the express buses to Marquette/2nd and shifting the rest of the buses to Hybrid is a reasonable compromise.
»» Submitted by »»» MunsingW at 1:24 PM on July 10

Surely walkability means different things to different people. To some, it signifies simplicity. For others, it means the very opposite, and connotes a dash of chaotic din. Particularly for those with crutches, or without legs, walkability is something altogether different. According to "On Foot: A Brief History of Walking," a great little tome written by Minnesota writer Joseph Amato

The eleventh-century Anglo-Saxon word walking meant "to roll about and toss" as the sea does. Moving from shore to land (as earthly travel so often does), by the thirteenth century the world broadened to mean "to move about" or "to go on a journey". At this time of emerging commerce and expanding pilgrimages, it acquired its contemporary meaning of 'going on foot'.

Walking has been around a long time, and there's a undeniable magic to the stroll, to the alternating rhythm of feet. Music is based on walking. Health comes from walking. Even though it might seem slow, Walk-Rate (1.5 mph) is still the ideal speed for experiencing the world: you can think, you can notice things, you can stop and smell the flowers.

It's only recently, during the last generation, that we've begun to replace feet with other sorts of technology. (Segway!) Just think of all the drive-in and drive-through options we have today. You can see a movie, go to a restaurant, get coffee, get your medication, go to the bank, and shop for groceries (in certain towns anyway, like the Dairy Barns in Long Island) all without leaving your car. One might argue that walking is at an all time low, at least in this country, as we staple our asses to the driver's seat.

But, one of the big problems with increasing per capital walking in the USA is that so few of our neighborhoods are actually walkable. Its really difficult to walk , even you have your nice new pair of New Balance sneakers ready to go.

So, what are the principles of walkability? Well, this isn't rocket science. The first thing you need is something to walk upon... something on the side of the road... something like a sidewalk. Sidewalks are brilliant. They're little places made especially for people, but where I grew up in the suburbs (Mendota Heights) we didn't have many sidewalks. People, if they wanted to walk anywhere, would walk on the road's shoulder, and let me tell you that no self respecting mother would left her kids walk on the 40 mph shoulder of the street where I grew up. Sidewalks should be a no brainer, but sadly many of today's new neighborhoods still today lack even the most basic building block of pedestrianism.

The second vital component is that you need somewhere to walk to. This is the problem that the WalkScore website focuses on -- namely that most new developments are homogeneous masses of residential housing in which, even if sidewalks and density made it possible to walk through a neighborhood, it'd still be pointless because there are no destinations. Where I live now, I'm lucky enough to have two grocery stores within a block of my house, and it allows me the luxury of walking for two minutes to buy a stick of butter, a can of pop, or a fresh homemade bratwurst if I get the inclination.

Only once we have these two crucial bits -- the sidewalk and the destination -- can we start to look at Advanced Walkability. These are the kinds of things that I usually think about on TC Sidewalks: Is the street wide and comfortable? Is it interesting to look at? Are there windows in which to gaze? Does the sidewalk separate the people from the cars? Perhaps some nice-smelling flowers?

Good, walkable neighborhoods are easy to spot simply because they feature pedestrians. And by that standard, probably the most walkable place in the Twin Cities is the State Fairgrounds during two weeks in August: There's tons to look at and do, there's plenty of space, and its just about impossible to get hit by a car. The only downside to the State Fair is that parking is a nightmare. If only there were some way to walk to it...
Posted by Bill Lindeke at 7:30 AM