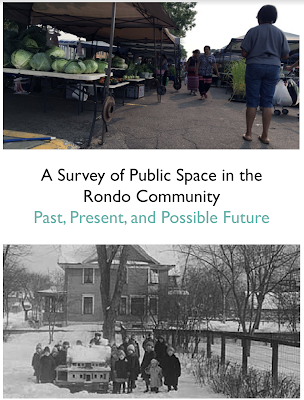 By now, you might have heard of the Rondo land bridge project, the efforts by people in Saint Paul's historic Rondo community to build political momentum, and raise funds, for a one-mile-long "freeway cap" over I-94 in the central part of Saint Paul.

Thanks to a grant from the Knight Foundation, I was able to put together a study of how the I-94 freeway has affected public space in the Rondo Community, and how a land bridge might change the neighborhood. It took me quite a long time to gather historical information, present-day quantitative data about things like noise and air pollution, and to write up the report, but I finally am able to share it with you. I'm happy with how it turned out.

The report has dozens of historic and present-day photos of public space in the Rondo community, some analysis of what public space is and why it's important, lots of historic info about the neighborhood, and some thoughts and data points about how public space might be impacted with any future changes to the freeway.

I'm excerpting the introduction, and you can download the entire thing at the link below. 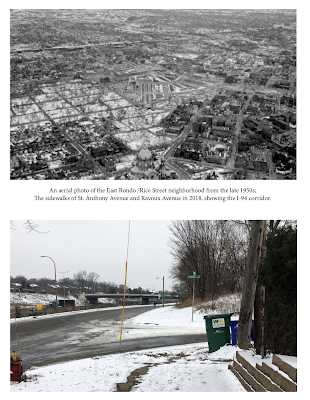 On the evening of Friday June 17th, 2017, a group of people gathered at the edge of Saint Paul’s historic Rondo Avenue neighborhood made a collective decision that challenged social assumptions about public space in Saint Paul. Protesting the police shooting of Saint Paul resident and school worker Philando Castile, a group of demonstrators marched down the Dale Street onramp and onto the Interstate 94 right-of-way, “blocking” the movement of cars traveling through Saint Paul’s Rondo neighborhood for a few hours.

In a bit of tragic irony, the controversial demonstration on the freeway that evening took place on precisely the land that was once old Rondo Avenue, the diverse heart of Saint Paul’s African-American neighborhood. Decades prior to that night, the contested ground for the demonstration was literally seized for “public purposes” during the freeway construction era of the 1950s and 1960s, when thousands of people were forcibly removed from their homes and businesses in the heart of Saint Paul. 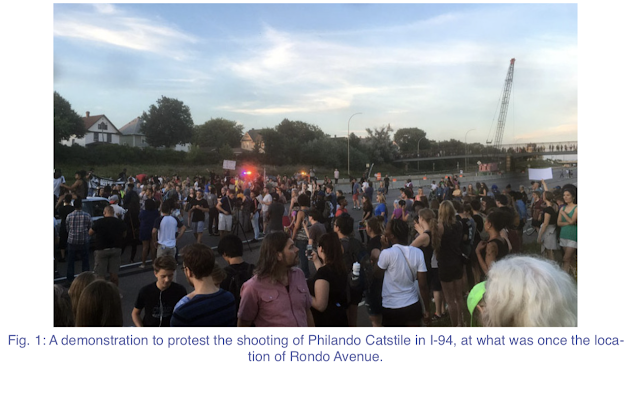 Apart from raising awareness about systemic police brutality, the demonstration, which led to a police stand-off and criminal charges that were later dismissed, illuminated key questions about the relationship between free- ways and public space:

What exactly is the difference between a public sidewalk, a public street and a public freeway? Do governments and public institutions have responsibility to redress the wrongs of the past?

These questions lie at the heart of the issue of public space in the United States. Everywhere in American cities, freeways have blended into the background of everyday life. These infrastructures allow thousands of cars to speed past the homes, businesses, walls, and trees of historic urban communities. The effects of the freeway blur into a vague urban landscape. For many people, these massive pieces of public infrastructure become almost invisible, the sounds of the cars almost inaudible, the speeding traffic to and from the freeway ramps almost insensible. And yet the presence of freeways, frontage roads, noise walls, pedestrian bridges, on- and off-ramps, and tens of thousands of cars that rely on them, continue to make a material difference in the lives of people who live near them every day.

As always in urban life, individual and collective well-being rely on quality public spaces for sociality, mobility, and recreation. In an era when governments are beginning to examine freeway infrastructure more closely, look- ing at impacts on public space should be an important step in the process of reconsidering and rethinking the historical and present-day relationship between freeways and nearby communities. 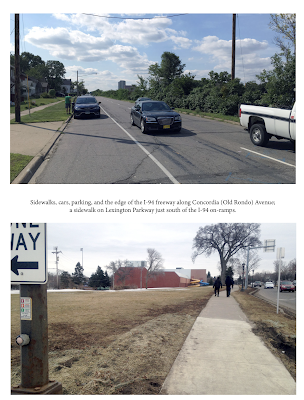 This study uses public space as a lens to think about the past, present, and possible future relationship between freeway infrastructure and public space. As government and institutions weigh the costs and benefits of potential changes to freeways for future generations of city dwellers, it is important to consider how changes might impact the parks, playgrounds, streets, and sidewalks on which communities rely. The focus here is on describing the importance of public space for a community, examining narrowly the 1.25 square mile historic Rondo community surrounding the Interstate 94 corridor in Saint Paul, Minnesota. The goal of the study is to look at the size and quality of public space within the study area, both before and after the construction of the freeway that dramatically and irrevocably transformed the neighborhood over 50 years ago.

Chapter 2 describes the overall purpose and methodological approach. This part of the study focuses on key reasons why public space is important for neighborhoods, outlining the connection between quality public space and physical, mental, and social health. Secondly, this chapter describes the mixed qualitative and quantitative methods that are used in this study to examine public space, both in the past and in the present-day.

Chapter 3 describes in general terms how this study defines public space. Here it describes the typology of categories, the difference between formal and informal public spaces, and the fundamental role that streets and sidewalks play in the landscape of public space for an urban neighborhood like Rondo.

Chapter 4 looks specifically at the historic landscape of the Rondo Community Study Area (RCSA), how public space might have existed before the freeway construction period radically transformed the neighborhood. Drawing on historic documents and accounts, this part of the report describes the different types of public space that might have existed in the late 1940s and early 1950s. Much of this public space landscape was informal in nature and, in many cases, relied on bottom-up institutions such as social clubs, businesses, or individuals to fill important roles in the community. Meanwhile, streets and sidewalks were largely oriented towards local uses, as opposed to regional users and traffic patterns that emerged after the freeway was built. 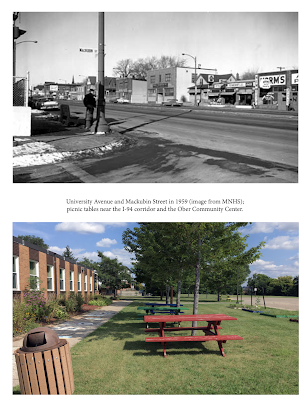 Chapter 5 examines the neighborhood’s public spaces in the present day, specifically focusing on size, type, and some specific measurable qualities. These include noise pollution, air pollution, and a basic proxy for safety and comfort along the street and sidewalks within the area.

Finally, Chapter 6 offers a few conclusions based on potential changes to the freeway infrastructure. Here, the study attempts to think about how changes to the 94 freeway corridor might affect public spaces in the future, largely in positive ways.

The goal of this report is to focus closely on the role that public space plays for the health and well-being of a community. Specifically, this study tries to look at the how construction of the I-94 freeway system and related changes that occurred during the construction years impacted everyday public spaces. Using public space as lens, it is compelling to think about the past, present, and future of public space, and the history of stability and change in the historic Rondo Community. Hopefully this report is the beginning of a larger conversation around the relationship between urban communities, historical inequity, and publicly-owned freeway infrastructure. No matter what happens next, no matter the future of the historic Rondo community and the freeway that divides it, public space will play a critical role.


I hope you enjoy the full report.

Erlinda Kaes said...
This comment has been removed by a blog administrator.
11:23 AM