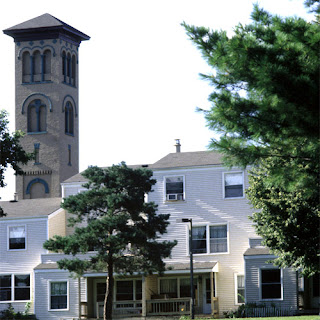 Located on the edge of the Torre de San Miguel Homes on Saint Paul's West Side, a 60s-era public housing project run by a non-profit, there's basketball court in a hollow along Wabasha Street. The court and the grassy spaces surrounding are a great example of a quasi-public space. It is not not an official city park, but nor is private space fenced off or reserved for specific property owners. Instead, it’s somewhere in between: open to anyone, not really accountable, vaguely regulated. Like many such spaces that are all around our cities, it serves a crucial function without much formal control. In the underserved, working class West Side, it is a rare place for young people to gather and play games with each other, most especially (but not limited to) the hugely popular sport of basketball.

Yet for over two years, when I used to pass by this court area on my way through the neighborhood, there were never hoops attached to the poles. On either end of the basketball court stood unadorned metal poles. It was a sad symbol of neglect of the poor and neglect of children. I would usually look over at the court on my way past the housing project and sigh.

One afternoon, in the summertime, I was heading down the sidewalk next to the court. I looked over and sighed again.

Then for some reason I paused and watched the six or so kids playing. I realized they were playing basketball.

Despite the fact that the hoops themselves were missing, the kids on the court had a basketball, dribbled it around the pole, and shot it ten feet into the air. They were playing offence and defense with imaginary baskets.

“She shoots, she scores!” I almost heard the young girl thinking, as the ball arced through imaginary hoop hanging in mid-air.

I’m often amazed at the creativity of the young, the ability to make their world fit their dreams. At the same time, the imaginary basketball hoop was a dismaying condemnation of our institutions -- in this case the housing non-profit -- to invest, maintain, and support our children.


Over a year later, real basketball hoops and backboards were finally installed on the court. Today, kids from all over the neighborhood use the court for all year long, stuff from basketball to bicycling to just hanging out.

In many public spaces, especially the informal and unguided ones, kids are always using their imagination to entertain themselves and create new worlds. The power of imagination is inspiring, but there’s no substitute for actual infrastructure, a legitimate place to play or a real basketball hoop.

He is no scam,i tested him and he delivered a good job,he helped me settle bank loans,he also helped my son upgrade his scores at high school final year which made him graduate successfully and he gave my son free scholarship into the college,all i had to do was to settle the bills for the tools on the job,i used $500 to get a job of over $50000 done all thanks to Walt,he saved me from all my troubles,sharing this is how i can show gratitude in return for all he has done for me and my family

I was so anxiuos to know what my husband was always doing late outside the house so i started contacting hackers and was scamed severly until i almost gave up then i contacted this one hacker and he delivered a good job showing evidences i needed from the apps on his phone like whatsapp,facebook,instagram and others and i went ahead to file my divorce papers with the evidences i got,He also went ahead to get me back some of my lost money i sent to those other fake hackers,every dollar i spent on these jobs was worth it.Contact him so he also help you.
mail: premiumhackservices@gmail.com
text or call +1 4016006790

I was cured of HIV with the use of natural herbs. My name is Alandre and I'm from Texas. I love herbs so much. Most times, injection and drugs are just a waste of time. I was cured, I suffered from HIV for 13 years but with the help of Dr. Mark herbal medicine, I was cured within a few weeks of drinking the herbs he sent to me through courier delivery service. This same doctor also cured my Aunty from herpes, as soon as I heard she had herpes, I quickly refer her to Dr.Mark and she was cured too after drinking his herbs.I have referred a lot of people to Dr. Mark and they were all cured from their various illness. Have you taken herbs before?. You have spent so much money on drugs,injections,surgeries etc and yet you have no good result to show for it. Contact Dr. Mark now, he is a herbalist doctor, Dr. Mark has herbs that cures Hiv, Herpes, diabetics, asthma, hepatitis, STD, cancer, chronic, etc. Contact Dr Mark through his Email address on: blessedlovetemple@gmail.com Please share the good news to other people once you are cured.

my Block chain wallet spoofed by merciless rippers , they were able to get away with 4.0147BTC from my wallet , this made me very sad and depressed as I was desperately in need of help , I made my research online and came across a very credible recovery agent with the email WhitehatstechATgmailDOTcom. The White Collar hackers helped me recover all I lost and also reveal the identity of the perpetrators , that's why I'm most appreciative and also sharing contact address for anyone in a similar situation, he’s nothing but the best! Contact the recovery specialist with the address above.

Are you desperately in need of a hacker in any area of your life??? then you can contact; ( hackintechnologyatGMAILdotCOM ) services like; -hack into your cheating partner's phone(whatsapp,bbm.gmail,icloud,facebook, twitter,snap chat and others) -Sales of Blank ATM cards. -hack into email accounts and trace email location -all social media accounts, -school database to clear or change grades, -Retrieval of lost file/documents -DUIs -company records and systems, -Bank accounts,Paypal accounts -Credit cards hacker -Credit score hack -Monitor any phone and email address -Websites hacking, pentesting. -IP addresses and people tracking. -Hacking courses and classes CONTACT THEM= .hackintechnologyatGMAILdotCOM WHATSAPP +12132951376(WHATSAPP) my services are the best on the market and 100% security and discreet work is guarantee

I really want to thank Dr Emu for saving my marriage. My wife really treated me badly and left home for almost 3 month this got me sick and confused. Then I told my friend about how my wife has changed towards me then she told me to contact Dr Emu that he will help me bring back my wife and change her back to a good woman. I never believed in all this but I gave it a try. Dr Emu casted a spell of return of love on her, and my wife came back home for forgiveness and today we are happy again. If you are going through any relationship stress or you want back your Ex or Divorce husband you can contact his whatsapp +2347012841542 or email emutemple@gmail.com

Most of these so called hackers are imposters, I've been ripped off a couple times before I luckily got a reliable contact James Wayne. A hacker that works with discretion and does all sorts of hacks, I would prefer to let his services speak for itself, if interested in hacking into your cheating partner's phone (whatsapp, bbm.gmail, icloud, facebook, twitter, snap chat and others ) -Sales of Blank ATM cards. -hack into email accounts and trace email location -all social media accounts, -school database to clear or change grades, -Retrieval of lost file / documents -DUIs -company records and systems, -Bank accounts, Paypal accounts -Credit cards hacker - Credit score hack -Monitor any phone and email address -Websites hacking, pentesting. -IP addresses and people tracking. -Hacking courses and classes CONTACT THEM = .synackhackingatGMAILdotCOM WHATSAPP +15075335710 (WHATSAPP).