Walkability is in the Details and Cities Keep Neglecting Them

One of the most critical things I’ve learned about active transportation and street design is that you have to use it to understand it. The 1000’ birds-eye view from which most engineers or architects look at a problem does not to justice to the particular demands of creating a walkable space. Similarly, the 40 miles per hour windshield perspective leaves a lot of important factors out of the picture, and many decision-makers that only see projects from behind their steering wheels or peering through an open window. So many important design details are lost. Nothing compares to actual street-level use of a sidewalk.


Here’s a great example of what I mean. Way back in the winter of 2015, Ramsey County began tearing down the old county jail built along the bluff at Wabasha and Kellogg Boulevard. It’s a prime spot at the heart of downtown, and the county was hoping to spur interest from developers in building something here.

(So far, they’ve had one serious offer. Unfortunately it came with a huge caveat: a demand for a huge publicly funded parking lot. Fortunately, the County rejected the proposal.)

One consequence of demolishing the building, though, was that it removed the sidewalk access to half of the Wabasha Street bridge, one of the critical pedestrian and bicycle links between downtown and the West Side where I live.

I found this out the hard way one winter morning when I began walking up the sidewalk of the bridge on my way downtown. It was a winter day, and the sidewalk was nicely cleared. 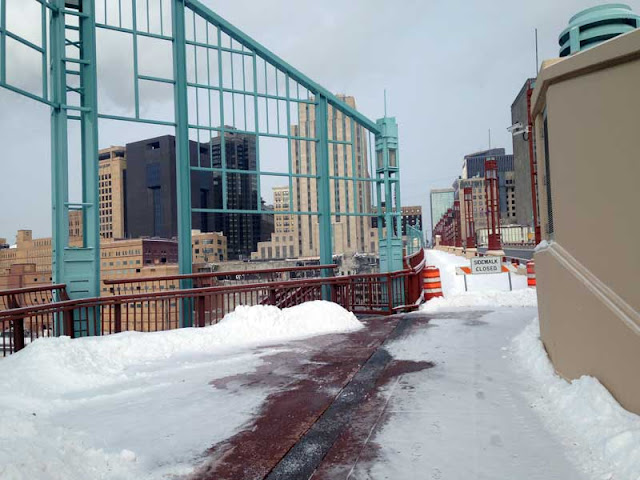 Unfortunately, more than halfway up the bridge, I found a concrete barrier with the announcement SIDEWALK CLOSED and a fence installed.

At this point, there was no way on or off the bridge sidewalk, other than a staircase that led down to an island in the middle of the river. My choices were a) to walk back the way I came, run across a busy road, and walk back on the other side a total of 3/4 of a mile or b) hop the fence and continue walking on the dangerous icy margin of the road while cars sped blindly around the blocked-off corner.

Like any good militant pedestrian, I hopped the fence. It was harrowing.

Later that day, on February 10th, 2016, I emailed my Council Member and West Side neighbor, Rebecca Noecker:

Walking across the bridge this morning was a delight until I reached the middle of the bridge. Apparently the city is closing the sidewalk access halfway through the bridge on the West side. For someone on foot, the only if you want to get across the river are to go down the stairs to Raspberry Island, turn back and walk across the bridge on the other side after crossing the street (only legally back at Filmore, which is quite a walk!), or continue forward and have to hop a jersey barrier and almost get hit by turning cars, made worse because of a fence sign placed right in the sightline. You cannot cross to the other side of the bridge because you will fall to your death. (This has happened once.)

None of those options are good ones. The city should either keep access open to the crosswalk or close it completely on this side of the street.


Closing off the sidewalk might have seemed like the prudent decision for the County when they planned the demolition, but in reality, it’s a meaningful hindrance for walkability on the West Side. For many pedestrian trips to and from the West Side, having the sidewalk closed means crossing busy streets one, two, or three times. That might not seem like much while you’re driving around or looking at a map, but over time it matters for creating a walkable place

What’s worse, there was no meaningful end point for this needless detour. Nobody at the County has any idea when or if this site will be developed. Waiting for a new building and sidewalk to be built at this bridge might take two years or two decades.

Since my 2016 email, I’ve been chatting once in a while with Council Member Noecker about the sidewalk. According to her, she’s been emailing the County regularly, every few months, to check in on getting the sidewalk re-opened.

According to Council Member Noecker, earlier this year the County budgeted money to install an “interim” concrete fence that would allow the sidewalk to be re-opened. Initially there were problems when the installation did not make the sidewalk wide enough, and they had to be tweaked again.


Finally, just last week, I saw a crane lifting the concrete jersey barriers off the bridge sidewalk and re-opening it to the public. The other day I walked over the west sidewalk of the Wabasha Bridge. 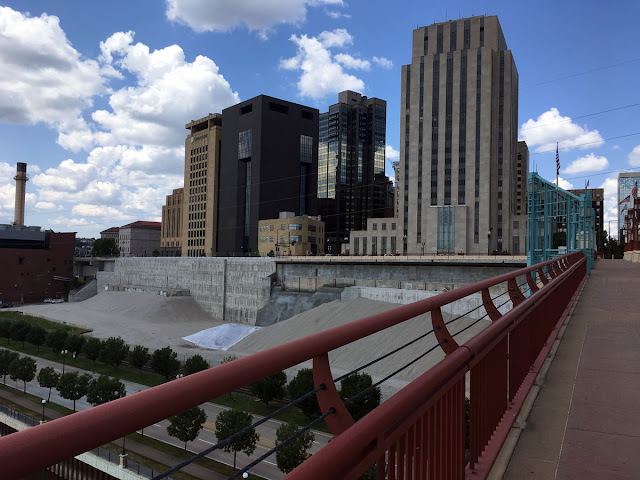 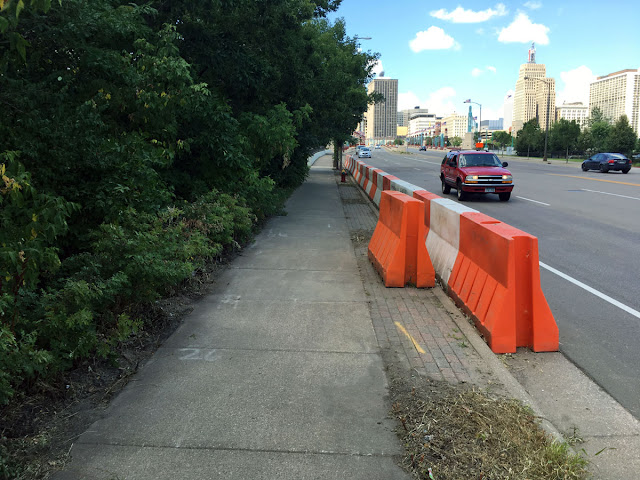 To many people, this might seem like a very small detail, almost inconsequential. But to me, it was an important step toward making sure that walkability and access are always included in urban street projects. Having both bridge sidewalks open and available to people will make a small but meaningful difference in people’s lives.

This just crossed my desk from a friend. It's a pedestrian closure on Snelling Avenue, another street that is difficult and dangerous to cross on foot.

Here's the email he wrote:

The lack of a safe pedestrian detour around the construction at Snelling & St Clair was brought to my attention this morning. This is completely unacceptable. First, there shouldn't be a sidewalk closed on Snelling Avenue less than a block from an A-Line station. The parking lane should be protected with jersey barriers and made pedestrian accessible for the entire length of the construction zone. No one should be forced to cross Snelling Ave twice to reach the transit station. Second, the "sidewalk closed" sign should be moved to the (only slightly) safer crossing of Stanford. Once the forced crossing is established at Stanford, there should be a painted crosswalk with a middle-of-the-road sign stating "state law requires drivers stop for pedestrians."

Finally, this happens nearly every time there's a project that necessitates the closure of the sidewalk. Public Works needs to create and enforce a comprehensive plan to address this during the permitting process. If a sidewalk is to be closed, then the contractor must do a better job of accommodating our most vulnerable right-of-way users.

Please address this specific instance today and work to ensure this is preemptively addressed for future construction projects by creating appropriate procedures.


When it comes to walkability, the devil is in the details. And in Saint Paul, we often get those details wrong.
Posted by Bill Lindeke at 10:23 AM