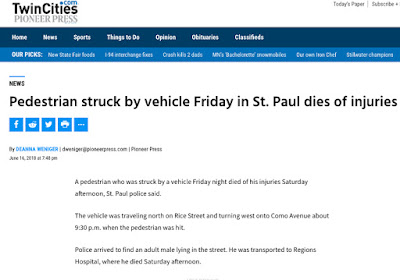 Already this week, there were two more tragic crashes in Saint Paul. While the details are yet unclear, in both cases the problem of streets designed to be dangerous is at the root of the problem, as Saint Paul's predictably deadly streets continue to cause injury and death.

On Friday, there was the tragic death of Benjamin Leighton, killed crossing the street at Rice and Como just north of the Green Line station. Leighton was 56 years old.

There are no details about what happened in the paper, other than the fact that the car was turning.


Bicyclist in critical condition after being struck by motorist in St. Paul
…
A pedestrian who was struck by a vehicle Friday night died of his injuries Saturday afternoon, St. Paul police said.

The vehicle was traveling north on Rice Street and turning west onto Como Avenue about 9:30 p.m. when the pedestrian was hit.


This intersection, where Rice Street, Como Avenue, and Pennsylvania Avenue come together, is designed to be deadly. Rice Street should have only two lanes here, with bumpouts to tighten turning radii and protect pedestrians. Rice Street has long been a deadly and dangerous street running straight through a poor neighborhood full of young people.

Pennsylvania Avenue is even worse. The four-lane footprint and lack of sidewalks on this street are completely unnecessary and not warranted by the traffic. Eric Saathoff wrote about this in 2016, and later I put it on my list of easy bike and traffic calming projects.

This part of the city, full of people walking and living nearby, should be a place where cars travel at safe speeds, under 30 miles per hour, where the chances of killing someone in a crash are very small. 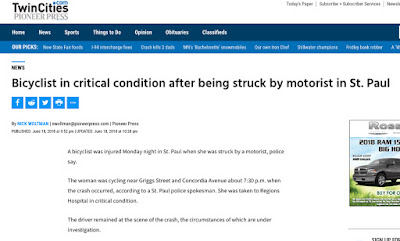 The second crash, where a bicyclist was hit by a driver yesterday at Griggs and Concordia (old Rondo), is an even more egregious example of deadly design.

Here’s the brief report from the Pioneer Press:


A bicyclist was injured Monday night in St. Paul when she was struck by a motorist, police say.

The yet unidentified woman was cycling near Griggs Street and Concordia Avenue about 7:30 p.m. when the crash occurred, according to a St. Paul police spokesman. She was taken to Regions Hospital in critical condition. 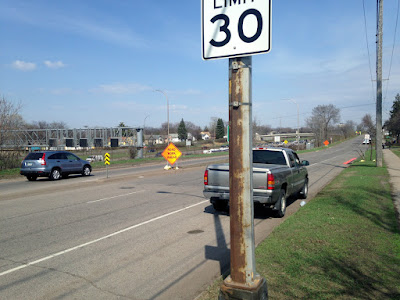 Concordia Avenue, just like St. Anthony Avenue across the freeway trench, is designed to encourage people to drive at deadly speeds. It’s a wide two-lane one-way street with no bumpouts or traffic calming features, right next to homes, schools, and parks.

There are no good reasons for these streets to be designed this way. Instead of being calm, safe streets in a neighborhood that could badly use quality public space, these streets operate as de facto high-speed roads for drivers avoiding freeway traffic. Along with the nearby onramps and dangerous arterials, the deadly designs on these two streets make the freeway area an barrier unsafe for anyone on foot or bicycle.

Both the 94 frontage roads should be narrowed and calmed, especially near the new pedestrian / bike bridges over the freeway which were built at great expense over the last few years. There are a dozen things that engineers could do to make this street safer, and again, this crash was predictable and unnecessary.

I pray that the victim here recovers from her injuries. If decision-makers act, our civil engineers could re-design these deadly streets to prevent crashes like these from killing or critically injuring people in Saint Paul.

Bill, the design of the Griggs bridge heading southbound also is a disaster — and an easy fix. For some reason, a locked gate at the end of the bridge forces you to veer left before reaching Concordia. That means you have your back to traffic! Yes, there are sensor-activated RFPBs. But idesign makes it a challenge for cyclists to see vehicles in the near lane, and it’s not clear that drivers can see cyclists or pets, either.
Michael Kuchta

Or peds for that matter ;)