Four of my Favorite Urban Drawings

Cartoons, drawings, and illustrations have always been central to architecture and design, both ways of knowing based on observing the urban landscape and reducing it to basic principles. Nothing does that better than a great drawing or illustration.

So here are some of my all-time favorites, along with brief explanations of why I think they're so keen! 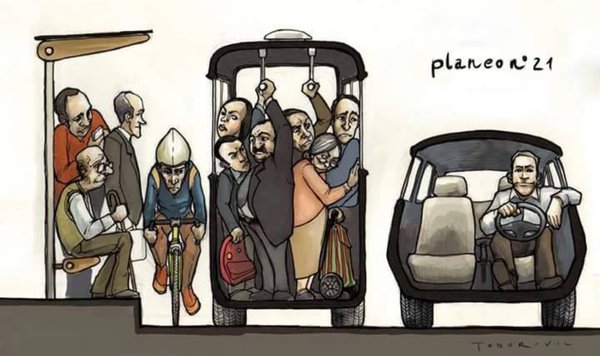 I love this drawing because it captures the inequality inherent in our street design priorities. Cars are climate controlled, hermetically sealed bubbles of private space. In general, we give over a huge percentage of our streets to people traveling in relative luxury, while forcing everyone else to share the street's table scraps.

Whenever our cities equivocate between bike lanes, transit, and sidewalks... Whenever we fail to prioritize shared or active mobility, we're propping up privilege. This illustration perfectly shows that fundamental dynamic.

#2. The LOS bulldozer (by Andy Singer)

Saint Paul-based cartoonist and my friend, Andy Singer, is one of this world's car cartoon geniuses -- a small group, to be sure -- and there are so many great Singer cartoons to choose from. If I had to choose just one, my favorite is probably this one, because it connects the dots in a very specific and important way.

It's not often that cartoons can capture a structural problem so elegantly, including specific nerdy data like average annual daily traffic (AADT) and level of service (LOS) to prove a point.

For more on how this works, check out my podcast with Andy Singer about his book, Why We Drive.

Architect, urban philosopher, famous Luxembourgian, and overall design gadfly Leon Krier's books are chock full of excellent illustrations that skewer modernist architecture and planning. This one is my favorite, though, because it elegantly captures the violence of sub-urban car priorities and how damaging they are to older, walkable cities.

In a way, suburbs and cities are literally at war with each other, and speeding cars are the weapons of choice. As long as cars are around, no walkable city is safe. 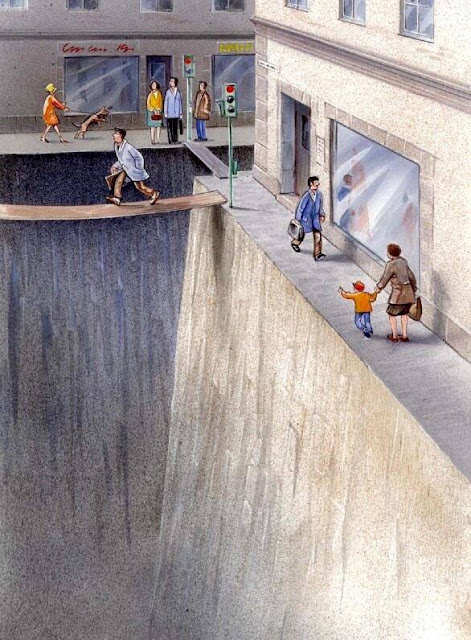 I don't know who made this amazing drawing of a city street as a giant canyon, but it perfectly captures the *feeling* of walking through a car-dominated city.

In many downtowns, and certainly most other urban places too, the danger of the street is everywhere. Technically the street might be "safe" according to modern engineering standards, but being anywhere near a street with cars going at 40 miles per hour just a few feet away feels terrifying. The streets might as well be cliffs, and your kid tugging on your arm might as well be about to fall into a bottomless pit. Crosswalks feel like the bridge in an Indiana Jones movie, and your dog is always in peril.

I love how this drawing captures that feeling so perfectly. This is probably my favorite sidewalk illustration of all time!

That's it. Those are my top four.

But just for kicks, here are some extras that didn't quite make the cut.