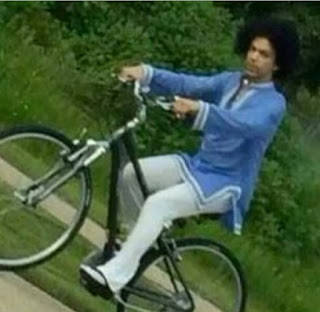 That Prince loved bikes is just more evidence that Prince, bicycles, and Minneapolis are all rad.

From the GQ complication of Prince stories:


Morris Hayes (keyboard player; Prince's longest-serving band member, 1992–2012): I took him to the bike store and I bought him a bike because he said he wanted a bicycle. I got him all sized up for it, and then I told him, "Okay, Prince, I'm only buying this bike if you get a helmet." And he said, "I don't want a helmet." I said, "Well, I'm not buying this bike, sir, if you don't get a helmet—you have to ride with a helmet or else I can't be responsible for you being on this bike." He says, "Well, I don't want a helmet." I said, "I'll get you a cool one—and I'll get one, too." So we got the helmets, but I found out later that he was riding the bike and he didn't wear it.

Corey Tollefson (Minneapolis-based entrepreneur and fan; attended events at Paisley Park for over 20 years): There's an arboretum, literally down the street from Paisley. And during the day he'd ride his mountain bike around town, and nobody would bother him.

Keith Lowers (longtime fan): Once the lights turned on [after a Paisley Park event in September 2015], I left quick because I'm super claustrophobic and can't take the cattle-exit style of most rock shows. So I'm walking real fast in the parking lot, trying to get to my car quick when—zoooom!—I see this dude on a bike ripping around the parking lot coming at me. I was ignoring him, trying not to engage, when he circled me and slyly said, "Where you goin'? The party's just getting started." WTF. It's Prince...on a white mountain bike, wearing his full rock-star outfit—white, to match the bike, of course, with a multicolor print on it. So I returned to the doorman at the advice of Prince—only to be schooled that Prince plays this joke often and that the party was indeed over.

Christina Terrones (longtime fan and Paisley Park regular): That was his thing: He liked to roller-skate and he liked to bike.

Lowers: I recently heard they found a fully custom-painted BMX bike in his vault with videos of competitive BMX riding. I don't doubt it. He was not only quick on the bike but nimble.

Kandace Springs (singer; befriended by Prince via Twitter after he discovered her cover of a Sam Smith song online in 2014): After the show—it was maybe like 10, 11—everybody was leaving, and Prince grabs me and says, "Hey, let's go bike riding." He had four bikes—two white cruisers and two dark blue or black mountain bikes. So I got on a cruiser, he got on a mountain bike, and we rode past everybody with our Afros, and everybody's like, "Oh my God! Prince!" He lives in a kinda rural area. We rode down Audubon Road, then there's a park right across the street and there's a path, so we rode down there a little bit.

Maya Washington (photographer; befriended by Prince after he discovered her online in 2014): First, when you go on the bike rides, you're like, "Wow! I went on a bike ride with Prince down to Lake Minnetonka!" It's fun. And you think you're special. Then I stayed there long enough that I'm like, "Oh—this is his thing." This is what he does. He has the movie theater where you go to watch a movie—he'll buy out the theater. He has his routine with all these young girls who come in: movies, bike ride, possibly a jam session. That sounds about right.


Thanks to Kai for sending these my way!

I can vouch for Kandace Springs' story since I was one of the people saying "oh my god!"

Prasanth said...
This comment has been removed by a blog administrator.
1:15 AM

Unknown said...
This comment has been removed by a blog administrator.
2:55 AM

Unknown said...
This comment has been removed by a blog administrator.
12:14 PM

thanks for sharing such a great and nice article.

christania’s “lej en cykel” bikes are rolling across the city. The system, less than a year old, is funded by christania’s municipal government. It is currently only in one of christania’s 22 administrative districts. Although a 2nd generation system, there are 12 “Houses” in this district, each with around 40 bikes. The yearly subscription cost is the equivalent of $2 US, and allows the use of a bike for up to four hours at a time. In less than a year, there have been 6,000 subscriptions sold. There are larger 3rd generation systems in the world, which do not have a subscription to bike ratio as big as that.

For Beginners A Complete Guide To Cycling Cyclato

Hey, thats a nice topic, thanks! I was looking for this information like a few days and finally, here it is. You're awesome.
I love cycling and doing it everyday. I've used to ride a regular bike, but now I've switched to an electric bikes, so now, I'm searching everything about it. Here are the links of my profiles plus the list of useful links I've found:
https://www.babycenter.com.au/thread/4103854/public-transport?startIndex=10
https://theridgewoodblog.net/governor-murphy-reimagining-of-urban-commuting/
https://archinect.com/news/article/150157914/californians-can-now-trade-in-their-old-cars-for-e-bikes
https://thetrek.co/cycling-the-appalachian-trail/
https://www.worcesternews.co.uk/news/18293475.push-bike-riding-bicycle---law-says/
https://witanddelight.com/2018/06/the-wit-delight-travel-guide-to-copenhagen/
http://www.gregdemcydias.com/2018/12/4-benefits-of-kick-scooters-for-adults.html

Great to see these photos of Prince and I love the story also. Thanks