The Complete "Beer By The River Test" Rankings

At a recent meeting, I got to enjoy a presentation on the proposed “river balcony,” an ambitious-but-achievable proposal to build a pedestrian-only walkway along the river bluff in downtown Saint Paul.

At one point during the presentation, the City Planner paused on the below rendering and started talking about the desire for patios along the balcony route. She said something along the lines that science suggests people like being outside, drinking beer, and watching water gently flow.

Then she said, “this Mayor really wants to have a beer by the river”

I quietly chuckled. At first glance, it seems a bit nuts to spend a bunch of money and shape city policy based on where the Mayor wants to have a beer.

But than I thought, actually that’s not a bad idea. Having a beer by the river is a pretty straightforward and worthy goal

In fact, the idea scratched something I’d been thinking for years. Why don't Minneapolis and Saint Paul have any patios by the Mississippi?

Fluviophobia: the Irrational Fear of Rivers

For most of the 20th century, the big shots in the Twin Cities, and Minneapolis in particular, had an deep-seeded hatred of booze and the Mississippi, seeing both these things as synonymous with moral and industrial pollution. They were necessary evils to tolerate on your way to the Lake or the church.

Well it turns out they got it completely wrong. Craft beer and the waterfront have become twin pillars of the 21st century Twin Cities urban landscape, and we're better off for it. But unless you take a six-pack down to the park hobo-style (which I highly recommend by the way), it’s still to this day all but impossible to drink a beer by the river.


So I'd like to introduce what I call the “beer by the river test.”


The Beer By The River Test

#1. A place where you can legally drink a beer outside
#2. You have to be able to see the Mississippi River
#3. (Extra points for being closer.)


And here’s an exhaustive list of all the places within the borders of Minneapolis and Saint Paul that pass the test, ranked according to quality of (beer + patio) experience:

The Complete Beer By The River Test Rankings

Number One with a bullet is Psycho Suzi's, really the only place where you can almost touch the water.

The image at right is carefully cropped to not show the scrap metal recycling facility across the Mississippi over in North Minneapolis, which is too bad because I find that view even more compelling. This is the Twin Cities' best BBTR spot, and it's not even close. The owner, Leslie Bock, should get the key to the city.

Plus their patio is large and the pizza and cheese curds is good (though those qualities don't affect the rankings). 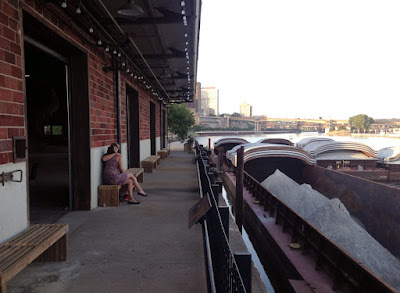 I’m happy to say that Red River Kitchen is the only BBTR experience that can give Psycho Suzi’s a run for its money. The only downside is that the “patio” which offers the best riverfront view, only has a few benches. The picnic tables inside are nice enough but a bit removed from the amazing riverfront-plus-beer concept that continues to haunt my dreams. So, compared to the riverside tables at Suzi’s, Saint Paul still falls a bit short.
On the other hand, this particular riverfront location is an absolute A+ when it comes to urban visual interest. At Suzi’s, the river is pretty quiet. There’s not much traffic, and the view of facing riverbank is dominated by a metal scrapyard. Sure it’s honest and gritty, but it’s hardly riveting.

The next three BBTR spots are all along the same stretch of Saint Anthony Main, where you can kind of see the channel of the Mississippi River that runs along Nicollet Island. None of these places are particularly close to the river. Rather, you know it's there and if you look you can kinda sense the spray from St. Anthony Falls.

Aster gets ranked higher for its superior style points and well-designed patio with bricks and tasteful fencing.

Same as above, only with a weird 1870s-meets-1990s vibe. That said, you're a little higher up on the Vic's patio, and can probably get a slightly better angle on the river viewing, so it's a close call.

This is there too. Why the name? Uggs.

This is literally across the river channel from the St. Anthony Main restaurants. I have never been here but if they have a patio, and I am told they do, then presumably if you're on an island in the river you can see the river?

I'm going to put it here as a placeholder for now, but would appreciate input.

Same as above, as Wilde Roast down the street serves beer too. Their patio isn't that great, but it qualifies.

Saint Paul's lone entry is the back patio at Eagle Street, just across Kellogg from the Xcel center. I think if you squint you can see the Mississippi.

[I am told that the river view is no longer extant thanks to a next-door development.]

This patio is on the off-ramp from West River Road and Lake Street, and I think you can kinda see the river from there. It's way far down though, because here you're in the Mississippi gorge area, which 50-100' bluffs.

Still though! River (even if far away) + beer + patio = recipe for success.


In Conclusion, We Suck

Frankly, I don't know what to say. The Mayor is right.

The Mississippi River runs for 30 miles through Minneapolis and Saint Paul and it's our #1 natural amenity. Having a patio that serves beer by the river is not difficult. Every (non-heavily-polluted) city with a river anywhere in the world has figured this out. By the way, the river is clean now. Beer is "classy" now, too.

But still to this day, with one notable exception, there's not a riverfront or even river-overlooking café to be found. The second it's warm enough, I want everyone with money to go to Psycho Suzi's to sit on their patio and drink a beer. Then I want to see some budgets and architectural plans.

Let's get to work people. The Mayor is waiting.


Update: Thanks for the feedback. I have added Longfellow Grill and Nicollet Island Inn, and subtracted Eagle Street. Sorry Saint Paul fans!


In conclusion, I’m very impressed by the new Red River Kitchen. They exceeded my expectations, particularly in the short timeline. Go down there and drink a beer by the river. The view is unmatched anywhere in town.
Ranking:
Solid #2, right behind Psycho Suzi’s. (With better patio furnishings, they would be #1.)

I don't think Eagle Street Grill counts anymore, actually - the new hotel seems to have already blocked the patio off from the river.

Well. An optimist might point out that most of the places you mention have their river view blocked by a giant park sitting between them and the river (albeit a hybrid park/power plan on that part of St Anthony Main). And an optimistic bacchanalian scofflaw might further point out that that allows you to enjoy a beer next to the river along almost its entire length through Minneapolis/St Paul as long as you're somewhat discreet about it (a friend tells me it's easier to enjoy a wine spritzer in a water bottle, although that same friend has balanced rather precariously along some steep embankments along St Anthony Main in order to quaff before a movie, so he's not a very trustworthy source).

More seriously Alex, something like this thought had crossed my mind. I'm not saying "privatize the waterfront." I've been to Long Island, and it's damn hard to find the ocean there.

So keep our parks. But there are plenty of spots where you could have a riverfront or river-overlooking patio. A short list in my mind: both downtowns, the "City House" which is the old grain elevator by the Upper Landing, somewhere on the U of MN East Bank in a setup that would mirror UW-Madison's Menonah Terrace, a place or two on West 7th Street where approrpriate, certainly the West Side flats...

It's important because there's nothing more relaxing than spending an hour with a friend and a beer watching the river go by. This is doubly true if it's a "working river" by the way, complete with boats barges trains &c.

The Sample Room, just across Gluek's park from Psycho Suzy's, also has a patio from which I think you can glimpse the river.

It's been quite some time since I've been there, but I don't think there is any outside seating at the Nicollet Island Inn (looking at street view, maybe there's a small space on the side away from the river).

Did you lose Tuggs somewhere along the way (you say three on St. Anthony Main but only list two)?

Seems like Summit should have found a way to get river views at its facility. But maybe I'm being unrealistic about how high you'd have to be to see water.

Anyway, it's an interesting way to illustrate how we still have to go in the transition away from an industrial riverfront.

I guess the Endless Bridge isn't a patio, and I'm not sure what its hours are, but as a place where you can get a drink and hang out outside and look at the river, nothing but the river, it seems like maybe it should count? I'm pretty sure you don't need to buy a ticket to drink there, but maybe it's only open during plays or something?

As for parks/boozing sharing space, there is definitely an untapped market for beer gardens in parks along the river. The Park Board doesn't need to float bonds, they need to float pontoons near Nicollet Island, set up kegs, and charge $8 a cup (and get some lifeguards).

I don't think you'll see any new contenders along the River Gorge anytime soon. There are height restrictions that limit appreciating the gorge's scenery to those who are in the gorge. Here's a breakdown:

I would submit Pryes Brewing on the West River Road for consideration. It certainly has the beer factor covered. It is still across the street from the river,but the patio feels a lot closer to the river than anything on St. Anthony Main. I've seen numerous paddlers pull their canoe or kayak on shore and stop by for a brew.