TCS Interviews George and Betty, Members of the Saint Paul Hiking Club, as they Re-dedicate a Plaque in Honor of a Veteran 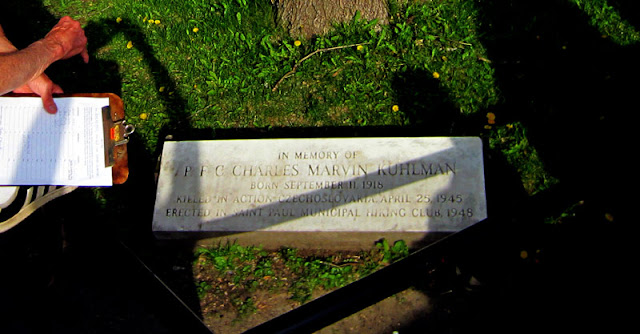 [The plaque in question.]

[Late afternoon. Late Spring. TWIN CITY SIDEWALKS (TCS) calmly, cooly, walks toward a large glass greenhouse in a large city park in the warm sunshine. He approaches a group of mostly older people, slowly gathering together, singly and in groups of two. They are the SAINT PAUL HIKING CLUB, and as each member arrives, they are greeted with the smallest hugs. They gather together to talk in quiet voices.

After a few minutes, the group walks through a pair of glass doors and into the low brown building. They walk, with purpose, through another pair of doors and back outside, into a small zoo. Monkeys sit in a tree nearby.

The group approaches a tree and stops to stare at the ground. Next to the tree, by the guardrailing, is a white marble plaque that reads:


An older man, in his mid 80s, GEORGE HUNKINS, holds a clip board. He turns to the plaque, places his shoe up on the railing, and begins to talk. The group gathers around, squinting in the sunshine.] 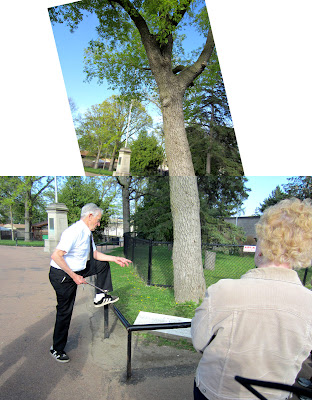 George Hunkins: [Quickly, in reedy clipped voice.] He was marine, graduated Johnson High School in 1937. HE wasn’t sent overseas until early 1945. You can see he was a PFC. The only thing lower is a buck private, you know.  He was kind of a medic attending to the thing, and I imagine that the German that shot him, I imagine he must have known that the war was going down, that the Nazis and them Germans didn’t have much left. But anyway, he was gunned down by this sniper.

And perhaps about when the word got back form his parents two or three weeks later, they probably contacted the Saint Paul Hiking Club. I think the club probably had twice as many members at that time, and I would guess they were much younger. I would guess that probably two-thirds of the men were in the military. And they decided then about the 1st Sunday in June of ‘48, they had a remembrance and they dedicated this bench. His parents came out, and the bench originally was in Mounds Park. I don’t know how long but they do know that some people that didn’t care about it, and did some damage to it.

So that’s how it started. Those of you that know, the presidents of this club. They know at my post because it got passed down from president to president. They don’t know much more than that, because they never had a historian. In fact, Harold Hawkinson kind of declared himself the historian.
My thing, being one of the youngest in world war two. And people say, thank you for serving, and I saw, I was no doggone hero. I was in the great lakes about six weeks when I heard a superbomb was dropped. So.

Then of course I have been active in there, and decided to wear this. I spent eighteen nineteen years out at Fort Snelling on the Thursday squad remembering all the veterans who served and got buried there.

It’s just my feeling that we should remember.

[GEORGE explains something about the united church of Christ on Saint Paul's Summit Avenue.]

George Hunkins: I went there. They have a lot of information about him. They give it you know, most of you probably know up until about thirty forty years ago, belonging to a church or a religious organization was pretty important. The last thirty years, it isn’t. I’ve noticed out at Fort Snelling, I’d say maybe thirty-five forty-five percent come out there, no clergy. That tells you they don’t belong to a religious organization. And sometimes you know, they don’t even hardly have a prayer in memory of their deceased one.

So that’s the background, and like I said, I could say a few other things but they’re not in my craw right now. We’ve had about 2 remembrances here, and we’ve had a couple out at Fort Snelling. He’s interred there and his parents elected to bring his remains back. I’m sure that day was January 6th, 1949. In fact, just the memory if you read the sports section this morning, you notice that the athletic director, Normam Taig, he made mention, said he was with his father. We just visited Normandy. Omaha beach. I cannot imagine what happened that day. Everybody remembers it. June 6th,1944. Plenty of blood and people there and of course, in fact, one of our members incidentally, two of our members are Gold Star. My wife. Gold Star sisters. and Pat Tiller, she’s a Gold Star sister.
We had another lady who was active in the club. She hasn’t hiked for probably 10 years. Her name was Lenore.

[A WOMAN WITH A FAMILY approaches the group, and begins to push its way through the assembled cluster.]

Woman with a family: [Pushing a stroller, annoyed.] Excuse us. Excuse us.

George Hunkins: [Unflapped.] Her parents, she was raised in Winona, I know, but she visited her brother who was buried there in France. And she got paid by the government because the government had a program that next of kin could visit there. And her parents didn’t care to go, but she was happy to go. So that’s another thing. Lenore’s brother, she was a gold star sister.

[A pause. Members of the SAINT PAUL HIKING CLUB look at the roots of the tree.]

George Hunkins: [Semi-wistfully.] I’m soon 85 and who knows you know, who knows about the rest of my life. I’d bet come 2021, we’ll have a big celebration. But it’d be nice to carry on this honor and keep this club going from time to time. You know how the people coming back from Afghanistan and Iraq, how they make it. GI’s in the Second World War, they were coming back by droves. I just saw the other day, sixteen million people served in the Second World War. Our country, about 290,000 sacrificed in the  Second World War. They used to say that a couple years ago about a thousand, mostly men, were dying every day. I just saw in the paper a few weeks ago. this year they envision that 250, 000 World War Two people will depart this life.

Just a moment of silence here.

[A brief second passes. Nearby, a LOUDSPEAKER mounted on a pole makes a beeping noise and begins to bray.]

Loudspeaker: Attention Como Visitors, your attention please. The time is now 5:56. At precisely 6:00, the Como Park Zoo and the Margorie McNeely Conservatory will close for the day. This includes all buildings, grounds, the café, and gardens. Please make your way to the exits now. Thank you for joining us at the Como Park Zoo and Conservatory today.

George Hunkins: [Continuing despite the LOUDSPEAKER] We gather here for Charles Marvin, he laid down his life. For all those that sacrificed their life, may they be in eternal rest. Amen.

[Silently, the SAINT PAUL HIKING CLUB turns toward the exit, walks through the building, and leaves the zoo.] 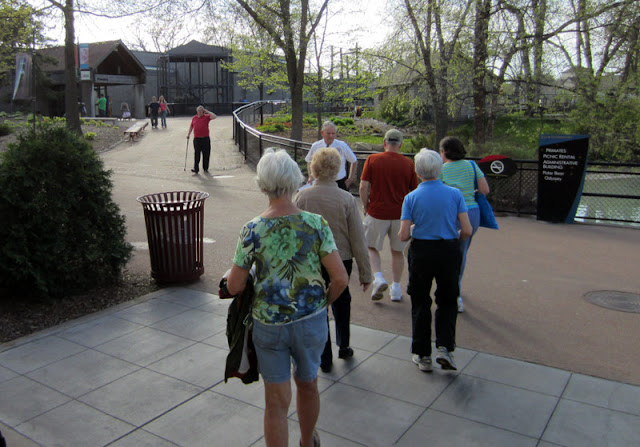 [Outside. In the Parking lot. The groups huddles together at the edge of the sidewalk, chatting excitedly. BETTY CONNELLY, an older woman, gets out a box filled with sugar cookies. She looks around at the others, unsure where to go.]

TCS: I’m doing a story about the hiking club for my website. Do you have time for a few questions?

Betty Connelly: As long as we can do it while walking.

TCS: Of course. It’s a hiking club. Just tell me your name then.

TCS: What kind of stuff do you guys do?

Betty Connelly:  It depends on where we walk, depends on who leads the hike. There are people who have been here longer. Maybe about five years that I’ve been a member. Whoever leads the hike decides where we’re going to hike. Oftentimes it’s in the East Metro, but not always. It can be occasionally in Minneapolis or that area. I remember the furthest away that I went was Hastings. Somebody had… that was a neat one because of the views there, and I’m a reluctant leader. I’ve led one each of the last two years. [She laughs.] But it’s on Sundays, it’s roughly about 5 miles, though I think last time it was about 6 miles. And on Tuesdays it’s supposed to be about 3 miles and about an hour hike. And every so often usually they designate a place to meet to eat afterwards. 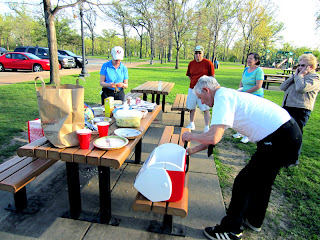 This is kind of unusual to do the eating before we hike. And so, pot luck. Lot of times it’s a restaurant afterwards. And I would say, at least on the Sunday hikes, there’s some people who show up virtually for every hike. A good Sunday there will be about 25 people, sometimes more. Sometimes less. And I don’t know the exact membership, I know its way beyond that. It might not be a hundred people, but it’s approaching that.

[GEORGE approaches BETTY and gives her directions to the picnic table. He offers her a ride in his car, and she accepts. Nearby, the SAINT PAUL HIKING CLUB gathers around the picnic table, laden with Tupperware, and eats delicious sandwiches made from white bread.]

Bill, you're great, and so is the ST PAUL HIKING CLUB.