The ‘Good Will Hunting’ Defense

What It Is: like in the movie good will hunting, where Matt Damon is arrested for punching someone or whatever and then defends himself in the courtroom using his genius knowledge, citing all sorts of precedents from all the law books he keeps in his apartment he doesn’t let Ben Affleck into, saying all kinds of crazy shit really fast. This defense would be like that only you’d cite research on bicycling. You basically thrown a whole bunch of peer-reviewed articles at the court and hope that it sticks.

What You Say: [Speak as quickly as possible] “Your honor, this ticket is unjust and I want to go on the record as contesting it. Numerous studies show that compliance for bicycling laws rises dramatically if laws are changed so that they make sense. Wall's 2003 study shows how redesigning intersections to give cyclists "bike box" priority makes it safer and improves compliance. Wolfe's 2006 groundbreaking study of traffic compliance at an intersection in Portland shows that bicycle and automobile compliance rises dramatically if you install scramble signals that make the intersection start to work for bicyclists. After these signals were installed, red light running decreased to under 5% of cyclists. The problem isn't the bicycles, it's the street design. Many streets in Europe have a bicycle only signal phase, as Korve and Niemeier's 2002 report shows. Or look at the green wave street design, meant to encourage cycling by timing signals to the speed of the bike. If we started to change the system a bit so that they made more sense for people on bicycles, you’d have the majority of people on bikes starting to comply with the rules. That’s the kind of change that would make a difference. I’m only one of a thousand people just like me who are caught in a system where everyone is illegal. This ticket is clearly arbitrary and capricious.”

% Chance That It Works: 15% [Nobody likes a smartass. Matt Damon had the book thrown at him.]

What You Say: [Speak as slowly as possible.] “Yurhonor, I had no idea. I didn’t know bicycles had to stop and wait at red lights. Since when? Nobody I know ever does this ever. If I’d known I was doing something wrong,  I woulda waited! But i thought it was OK. Nobody tole me it wasn't. How am i supposed to know that i have to wait here? I’m innocent, innocent I tell ya!”

% Chance That It Works: 4% [Ignorance of the law is no excuse, though in this case, I suppose it should be.]

What It Is: In 2010, the legislature passed a red light law for bicyclists and motorcycles to accommodate them on stoplights that don't change unless there’s a car there. Though this law is intended only for particular cases where the stoplight is on a trigger, you can us this uncertainty to your advantage by invoking it. It’s basically a variation on the ‘playing dumb’ law combined with a Matt Damon-like level of knowledge of local bicycle ordinances.

What You Say: “Your honor, forgive me but wasn't there was a law on the books that said that if you come to a stop at a red light and look both ways with care and attention you can proceed safely through the intersection? Wasn't it Minnesota Statute 169.06 subdivision 9, or something like that? I thought I'd read somewhere that it was OK, and that you could do this. Am I wrong?”

% Chance That It Works: 89.5% [This is the kinda thing that lawyers really dig.]


The “I Did It For Science” Defense

What You Say: [Spoken with wavering voice.] “Your honor. I am just a researcher attempting to understand how people ride bicycles everyday in our city. I don’t know your ways. Look, everyone agrees that bicycling is a really good thing: the county, the city, the nation, the world. We all just want to figure out how to get more people to ride bicycles through our cities as part of their everyday lives. This is a really important! I’m just a lowly researcher, and I have to bike the way everyone else does, the way that my target audience, the regular people, are riding their bikes. I'm just trying to understand how normal ride bicycles. I have to bike like they do. It's part of my project, I can't not do it. I am compelled. Please take pity on me. I'm a just a poor graduate student. Oh god." [Sobs.] 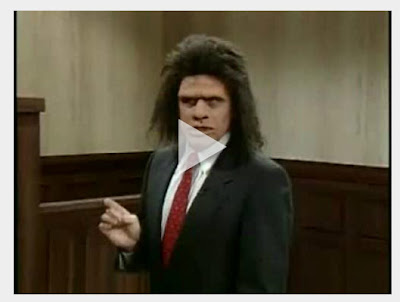 The ‘Whole System Is Wrong’ Defense

What It Is: An impassioned diatribe about the moral turpitude of American automobile-dependency and the hegemonic system that supports it.

What You Say: [With fire in the belly.] “Your honor. ever since Henry Ford first declared his love for Adolph Hitler, the automobile has been out to erode the very fabric of democracy. Ever since Firestone, Goodyear, and General Motors conspired to destroy the transit systems that used to be everywhere in our cities, the automobile has been the #1 scourge of the environment. Ever since greedy electric utilities used the automobile to increase energy consumption, ever since Robert Moses used the automobile to displace thousands of our poorest citizens, ever since entire cities were razed to the ground in service of this steel plague, the America that I know and love has been under seige. We need to stand up now to this polluting insatiable solipsistic death machine and say, No! Not today, not on my corner, not in my city!"

The ‘It Was Windy’ Defense

What It Is: A blatant appeal to meteorology.

What You Say: [Simply.] “Your honor, in my defense, it was very windy that day. A gust came up from behind me and just blew me through the intersection. There was nothing I could do. Honest!"

When I got a ticket for riding on Nicollet Mall a few months before it was legalized, I used a combination of Pleading Ignorance and The Whole Damn System is Wrong. "Who ever heard of getting a ticket for riding a bicycle?" The clerk certainly had. While she enjoyed my argument that the county should actually be paying me for bicycling, since bike infrastructure is cheaper to build and maintain that auto infrastructure, she still made me pay the ticket.

Red light defense will totally work. If you treated the intersection as a 4-way stop and then proceeded you exercised good judgment and the officer unfairly cited you.

So you're going to try the red light defense, huh? Probably a good idea. The good thing about this defense is that if you can throw out a few technical terms about what type of sensors are in-place at the intersection and can give information about the signal phasing, the judge won't have a clue if you're right or not, and nobody will be there that can argue against you.

The down side, I guess, is that it's probably a lie. The light probably did turn green shortly after you passed...

Or you could, I don't know, stop at the red light and not have to worry about getting a ticket.

Scott, I stop at red lights. And at two intersections near my house, which are some f-ed up combination of timed and triggered, I can end up waiting 3-5 minutes for the light to change. Yes, I time this. I watch the crosswalk light change to a flashing red hand and then switch back to a walk signal and it starts all over again, while I can't see any cars coming. The 2010 law is my friend.

This post includes all information whatever I was looking from couple of week ago. Thanks for sharing.