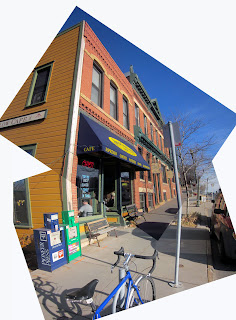 In the long and tangled history of our Twin Cities, there aren't many places that capture the imagination like the words "swede hollow."

Swede Hollow is an ancient lost civilization, almost erased from memory. It's a gateway to a whole lost world of the earliest Twin Cities, a world filled with towering factory smokestacks, tumbledown handbuilt homes, a million languages, and turret topped mansions perched high atop hills. It's a world that we'll never find again, a world lost to us (though not as lost as those that came before).

Today, Swede Hollow is a forest valley whose past lives in the brewery ruins and stories and photos. The actual hollow is a valley falling down like a crack in the sidewalk, a little storybook in the middle of St Paul's East Side bluffs, an area filled with old homes and disheveled shops, ancient indian mounds, and crooked romantic trees.

This part of the city has two things that are particularly rare in these parts: history and hills. And they come together beautifully at the corner of 7th and North streets, where you'll find an old brick building that triangulates into an iron turret.

The street itself rises straight out of the sandstone buildings downtown to face the wide river valley with all its bridges and bluffs. As you walk down East 7th, you may squint and imagine you're looking West for the first time across the prairie, or that you're traveling the country with only a harmonica for company, or that you're a tree or a bird or a stream.


The corner of the café has huge windows that flood with sunlight from the South and West, so that even in the wintertime, sitting in the café feels like being a greenhouse flower. In the summer there's a patio made from old bricks that has all the careful accident of a Japanese garden. Streets and alleys venture off in almost every direction to undermine expectations. The area seems to grow like an organism or a garden, and you get one wrong move and you'd be lost forever over here on the East Side.

Picking your way through Swede Hollow you feel like Hansel or Gretel on an adventure, pathfinding through a forest filled with ghosts and memories. The sidewalks of East 7th Street will expand your horizons. Leave a trail behind you.

A pro tip about Swede Hollow: It comes up at 7th and Payne Avenue. About 2 blocks up Payne as you head into Railroad Island the Italian place, Yarussos, has one Saturday a month where if you show up on two wheels between noon-2 PM, you eat free.

Their sauce is not vegetarian-friendly, but if you have no issue with traditional red Italian sauce, it's a nice perk of arriving on bike, and superb with kids.