Now More Than Ever, Minneapolis Needs a Walking & Biking Coordinator

Last week, the Star Tribune published a story by ace political reporter Eric Roper about Minneapolis' recent job opening for a bicycle and pedestrian coordinator. (This was not a column, mind you, but an actual “journalistic” “news story”.) The article basically castigated the need for such a pedestrian position, claiming that public works is already giving adequate attention to people not driving cars:

But the firefighters union leader said it's an example of misplaced priorities. Mark Lakosky, president of Minneapolis Firefighters Local 82, said the number of firefighters has dropped steadily during Rybak's time in office.

"When do you stop funding all these fluff programs if we're really prioritizing?" Lakosky said.

The “article” makes hay out of the fact that the city budget is being slashed yet again, using this hardship to pit important programs against each other. Of course, the article gets a lot wrong, but mostly it gets wrong the idea that paying attention to people walking, people taking transit, and people riding bikes is “fluff.”

[Note: In a futile Kersten-esque attempt to curry favor with the Tea Party, the Strib editorial board followed that up with an editorial using the hiring of the bicycle and pedestrian coodinator as an example of government waste.] 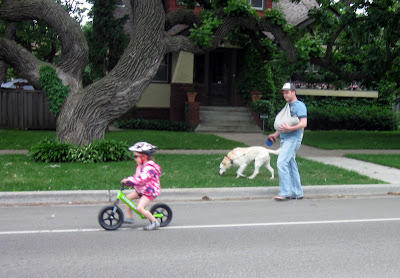 [Some of the kinds of people who walk and bike.] 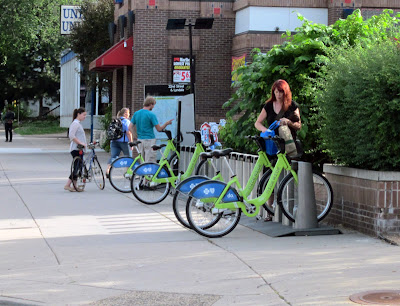 [More kinds of people who walk and bike.]

One important thing that the Star Tribune pretends not to understand is that lots of people walk and bike to get around on a daily basis. These people fall into a whole bunch of categories: poor people, old people, young people, people who want exercise, people with dogs, people saving energy, people saving money, people who enjoy urban areas, and probably more kinds of people too.

Particularly in a city like Minneapolis, that has a disproportionate amount of the area's affordable housing AND most of the area's walkable and transit-friendly housing stock, paying attention to bicycling and walking is a crucial job. For Minneapolis to go without anyone paying attention to biking and walking is akin to a car-dependent suburb (go ahead, pick any of them) going without a traffic light maintenance crew. It would be unthinkable.

Not only that, but when lots of people are out of work, they're looking for ways to save money. Demand for alternatives to cars goes way up. People in Minneapolis are trying very hard to use transit or get around on foot or bicycle. In an era of deep recession, focusing on transit, biking, and walking becomes MORE important, not less important.*

Finally, when compared to the huge amount that we spend each year on highway construction, maintenance, traffic enforcement, and planning for cars, the amount that it costs to construct a bike lane or build a pedestrian bumpout is minimal. A single traffic light costs north of $80,000 to install, and thousands of dollars per year to maintain and electrify. [Note: This is almost exactly the same cost as one bicycle and pedestrian coordinator.] If increased walking and biking in Minneapolis can reduce the need for auto infrastructure, the position pays for itself. 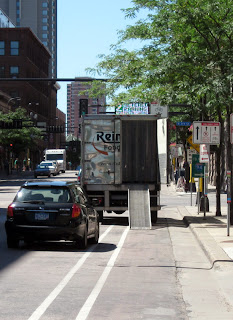 [Unlike the Department of Public Works, a knowledgeable bicycle and pedestrian coordinator might know how to design a descent downtown bike lane.]

Focusing on biking and walking is the cheap solution for cities seeking to cut transportation costs. And this is only going to become more true, as governments at every level make steep cuts in every budget they can get their hands on. Not only can we not afford to build more roads and freeways, we can barely keep our current streets paved, barely keep our bridges from falling into the river. In this new economic era, the best transportation solution lies right between your ankles and the floor.

Sadly, budget cuts have severely impacted many of our shared public institutions. For example, our very own Star Tribune newspaper seems to have laid off all its experienced reporters, and resorted to employing interns fresh from the Washington Examiner as journalists who write pieces cobbled together from glancing at the city's job openings and cribbed notes from someone's internet blog rant.

How else can you explain how a supposed piece of “journalism” about transportation and city budget cuts can fail to mention the important context of reductions in Local Government Aid from the state, metropolitan fragmentation, or the larger picture of transportation funding priorities in America? In these trying times, perhaps its time to ask whether or not the Star Tribune should spend less money re-branding their website, and more money finding a way to hire real reporters?

* Which is why cutting the MetroTransit budget is really stupid.
Posted by Bill Lindeke at 11:24 AM

Mayor Rybak was on the local sports, sports, sports station defending the coordinator. He had a great line about how the MPLS firefighter union leader was concerned about Minneapolis fire safety. Rybak pointed out the guys lives in Chanhassen, which has a volunteer fire department. I wish it was constitutional to make Firefighters and Police live in the city they serve.

Just found your blog. It's a nice refreshing perspective!

I had the same thoughts when I read Eric Roper's piece. I believe our local media tries to stir up motorist anger against all other forms of transit especially in an era of budget cuts.

Just look at the venomous Strib comments toward anyone who bicycles or walks. You know, the stereotypical responses without any sort of critical thinking. According to the cheerful motoring community, I blow stop signs and lights, have disregard for the rules of the road, and should have died by the time I got to the end of the block on day one.

Oh but I forget, I'm a "liberal" too - far from it actually. One of my favorite responses, "It's a free market decision to not drive. I am not mandated to spend money on a vehicle, registration, maintenance, insurance, and gasoline. It's too bad my taxes subsidize motorist welfare. Also, exercise on my bike keeps me from getting fat and off medications. Who really represents freedom and self sufficiency here?" Crickets...

I'm from WBL (we still have a few sidewalks) and have bicycle commuted to the Midway area for eight years, year round even. My primary reasons for doing so is to save money (a ton!) and exercise. We even have one vehicle! Imagine that. Some neighbors have 4-6 vehicles - talk about blight.

I'm not for big government, but in my opinion a bicycle and pedestrian coordinator is very much needed in Minneapolis. Cyclists and peds just want to get from point A to B in a safe manner. Having someone focused on those modes of transportation is a step in the right direction.

Now let's talk about the shady and questionable gov't positions in roadway transportation. Oh, but that's a different story entirely...

Pretty effective material, much thanks for your article.

I agree that encouraging more people to walk and cycle has economic but also environmental benefits. I think traffic safety may need to be addressed even more since accidents can occur since there are more people walking and biking than ever before.