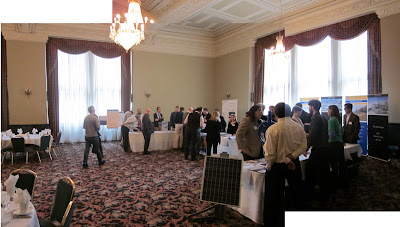 [Tables in the 3rd Floor ballroom at the downtown Vniversity Club in Saint Paul.]
The University Club building is very fancy, though much less fancy then it used to be, as it now houses outreach offices for the College of St. Scholastica and Lifetime Fitness (?). But, regardless, there is still a huge fireplace and 100% marble plated bathrooms and a player piano, and it is here in the 3rd floor ballroom where I find the Saint Paul SmartTrips 2011 Saint Paul Transportation Summit.

This is a high ceiling'd ballroom, and in the back of the room someone has put together three or four tables, and there I find all the usual players: MNDOT touting the new Lafayette Bridge, HOURCAR, the soon to be expanded NiceRide, the Central Corridor outreach crew, a group from the Midway Chamber of Commerce with a new "buy local" campaign called "Discover Central Corridor" (or something like that), MetroTransit, a Union Depot guy, a guy from the Saints pushing the Lowertown stadium, folks from Sibley Bike Depot, and Dero bike rack company with something called the ZAP.

After some mingling, we sat down at the tables (each marked with a different category, somehow organized according to roles like "advocacy" or "promotion") and proceeded to get coffee, fruit, and a sandwich while listening to talk about the tranportation future of Saint Paul. I'd say that about 40% of the room was business types, represnting a business or organization that might be affected by transportation or the impending light rail construction, 40% were transportation professionals working for one of the orgs or planning offices, and the rest were advocates or community group people (like myself).

Finally, you had Damian Goebel from Saint Paul SmartTrips ...
And that's all! Lots of mingling. Sandwich was pretty tasty. 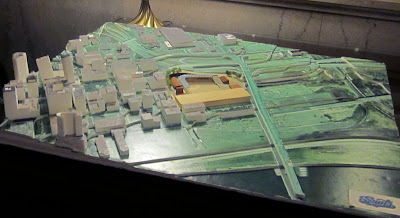 This cannot have effect in actual fact, that's what I consider.