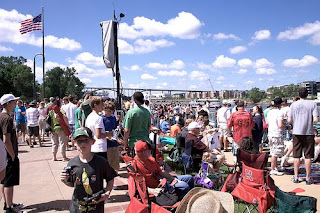 The weekend got me thinking about old photos showing downtowns in the 1950s with streets just filled with people. Downtowns were built on density and crowds and transportation links that connected people all throughout the city. As Fogelson shows in his book, for the 50 year period from 1900 - 1950, businesses and property owners in US downtowns could do no wrong. They raked in money left and right as crowds of people daily filled the streets. (For example, each day in 1920, roughly 270,000 people commuted into downtown St. Louis, a city of roughly the same size as the TC.) Department stores were clustered there, and most everyone did their shopping downtown. Public spaces and public events were radically different than they are today. You didn't have to 'attract' people to 'events' like you do today. The people were already there. 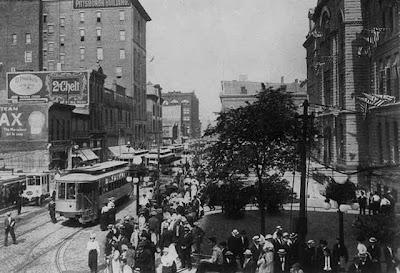 [A typical day on the crowded streets of Downtown Saint Paul.]

But suburbanization and cars changed all that. Today, its very different, and most of time (except around Nicollet Mall or the Warehouse district), the downtowns look like something out of a post-apocalyptic video game. A huge percentage of the downtown Saint Paul office space is sitting empty. (And, if it wasn't for the Target corporation, Minneapolis would likely follow suit.) Sure, a few people are moving back to live in the downtown areas, but its just a slim fraction of the kind of density you used to find.

And that's why Saturday was such a cool day for downtown Minneapolis and Saint Paul. First, you had an absolutely insane number of people show up for the Red Bull Flugtag, a way-better-than-advertised event that combined the folly of Icarus, the imagination of Galileo, and the aquatic gravity of Cannonball. By police estimates (which tend to under-report political protests), there were 90,000 people flooding the streets of downtown Saint Paul during the afternoon. That's as many people as I can remember being downtown during the RNC or the Obama rally. 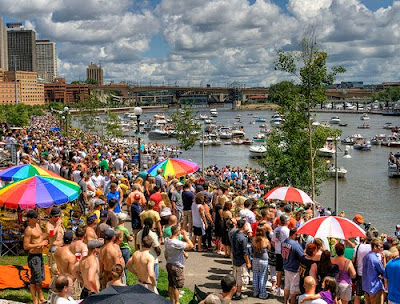 [The streets and river valley fill with folks enjoying the ephemerality of flight.] 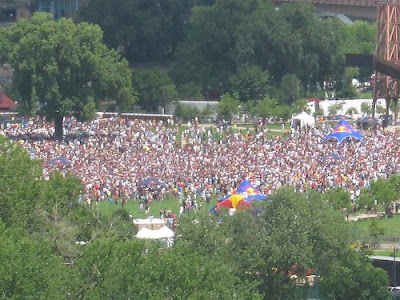 [A small part of the huge Flugtag crowd.]
Then, later that same day, a new crowd gathered around the Minneapolis riverfront to see the wonderful Aquatennial fireworks. Again the streets were filled and bustling, and even without the fireworks, it was an exciting place to be. And both these events could only have been held downtown. (Just imagine if they tried to get 90,000 people into Eagan or Anoka?) 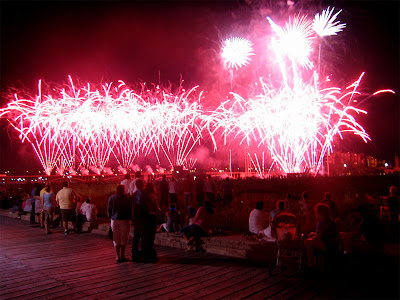 [Crowds watch the awesome Target-sponsored fireworks display.]
Of course, with the freeway partialaly closed to cars, the traffic was supposedly horrendous. Just imagine how many people would have come downtown to see the Flugtag or the fireworks if we had a few more convenient transit lines up and running. How many of those car drivers would have taken the Central Corridor or the planned SW line?

I think the future of Downtowns is looking up. Ten years from now, the skies will be filled with Flugtags and fireworks! 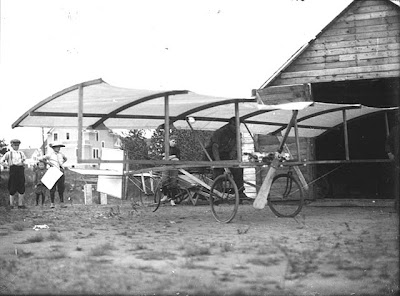 [In 1910, Snelling Avenue resident Fred Parker participates in the 1st ever Saint Paul Flugtag with his hand-made flying machine. Img. MNHS.]
Posted by Bill Lindeke at 10:47 AM

I watched the flugtag from about 50 feet from where you took that third photo. You see that crowd of shirtless bro's in the bottom left corner? Were you around when something spooked their dog and it took off running? It got hung up on a large cooler and ended up pulling the cooler behind it for 50 yards. The cooler tipped over, spilling beverages in glass containers that shattered all over the path. The dog and cooler also knocked down a dozen people or so as it ran through the crowd.

It was one of the funniest things I've seen in a while - way funnier, in fact, than the flugtag itself (which I found only mildly entertaining).

actually i found these photos on flickr. i forgot my camera.

yep, you correctly point out that 'people watching' is the best and most attractive pastime. also, watching fire. its hard to top the oldies.