Now's the time to talk about: The Gopher Bar 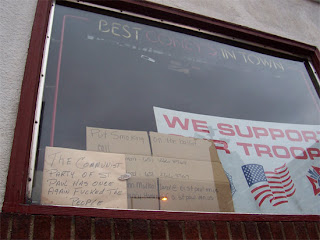 Joe Kimball over at MinnPost has a fun post on the current status of the Gopher Bar, located at East 7th St. and Wacouta over in downtown Saint Paul, which he approvingly declares "won't ever be mistaken for high class."

He gives a nice history of the place, a little hole in the wall that (until the "Total Restoration" of the Original Coney Island near Mickey's Diner is complete) is the best place to go downtown if you want a Coney Island hot dog. Apparently the economics of the hot dog is changing, probably due to the smoking ban, global warming, floods, lurking bird flu, and communists. Kimball writes:

My lunch hours held up, because I've got something unique. [The Coneys.] But the ban kicked the [crap] out of my after-work crowd," Pappas said.

To make matters worse, Kappas said his liquor license fee went up by $2,000 this year.

"Too many communists running things," he said.

And now, the price of wheat has caused an increase in the cost of buns. "They went up a month ago, and they're going up again," he said.

Kimball also mentions how the current owner of the Gopher Bar had at one time, right after the smoking ban took effect, posted "handwritten screeds" in his window, whose language was "inappropriate" . . . signs which have since been removed.

Seeing as I happen to have taken photos of these screeds when they were up, I thought I'd share them with the world . . . 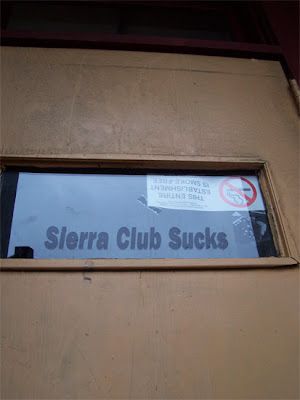 [The front door of the Gopher Bar, shuttered as I'd found it. Note the inverted notice.] 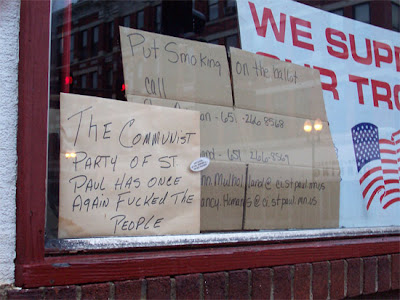 [The inappropriate sign trifecta (or quadrafecta, including the 'coney island' neon hovering just out of the frame).]
Posted by Bill Lindeke at 10:44 PM

I hate those clowns over there. We went in there once when I lived in Lowertown... they all stared at us like we were outsiders. Then we saw the huge confederate flag on the wall. Then we looked at each other, said "fuck it" and left.

"they all stared at us like we were outsiders."

They can smell you commie libs as soon as you walk through the door.

I hope that guy opens his eyes to the world. You can tell his intelligence by the profanity on his signs.

I love this place! Since the first time I walked in there four years ago they have treated me with respect. They always have great drinks and coney dogs ready. The signs are great... the smoking ban was BOGUS and in this country we should be able to say what we want. If you don't mind dive bars, this one is great!!!!

The Gopher still is a good memory for anyone who has ever passed through Saint Paul. I've been in Cocoa Beach for a year and still miss the intelligent conversations and debates had at the Gopher. Once you get pass the facade which is mostly macho patriot posing, the place is a great home away from home, best coney's outside of Detroit city!

I remember the first time I walked in to the GOPHER! I LOVED IT! George and Sherrie make that place home! Never would I dream of eating a coney any place else.

I've had the Coney's and I think they are awesome -- and all the 'Patriotic" posturing didn't bother me-- but hey what happened to personal accountability?? the first rule of business-- adapt or die. If you can't make it---. don't just BLAME EVERYBODY ELSE.

A classic Gopher window sign, which tells you where these racist, reactionary clowns are at, who think nothing of being rude to black customers, was after Timothy McVeigh blew up the federal building in Oklahoma. In the Gopher window: "WE NEVER ACCEPT CHECKS BUT WE WILL CASH TIMOTHY MCVEIGH'S CHECKS ANY DAY".

Whenever I hear someone refer to the Gopher I am reminded of the server there wearing a t-shirt with the phrase 'silly faggot dicks are for chicks'. Stay classy Gopher.