Here are some Twin City Sidewalk-related bits that have been accumulating in my Sidewalk folder, that I will share with you in a feature I've just renamed "News Flash!" News Roundup.

Minnesota, you're not alone. Our recent LRT cutbacks, where Bush cronies at the Federal DOT and in the Governor's Office have urged trimming costs to the proposed Central Corridor line, are part of a larger pattern of underfunding transit throughout the country. For example, here's a Washington Post story on a failure to fund a DC Metro extension running to Dulles Airport, money that local politicians had counted on receiving.

My favorite part of the story is where federal officials use costs overruns at Boston's Big Dig
to justify cutting back on transit.

Officials with the Federal Transit Administration say they are concerned about the price tag and the specter of another Big Dig, the Boston project built by the same contractor in charge of the Dulles rail line, which took years longer and cost millions more than planned, according to the sources, who spoke on the condition of anonymity because the negotiations are sensitive. In addition, the agency has been reluctant to promote large-scale transit projects.

Thanks a lot Boston!

This just reinforces my theory that Pawlenty is G. W. Bush writ small, or as close to the Bush Administration as you're going to get in family friendly Minnesota. He's like Bush's mini-me.

The story mentions the Minnesota bridge disaster, and in my mind, sheds some light on why the DOT head came to the Twin Cities and seemingly un-blamed the Governor for neglecting infrastructural maintanence. (As Nick Coleman pointed out in his column a lil' while back.)


The Strib had a piece on downtown Minneapolis, and the fact that a few businessess are leaving (esp. T.J. Maxx 'double x'). But it also carries an important caveat: a lot of new stuff is opening too...

Here's a quote from someone at the Downtown Council, the business assn.:

Her first order of business: Keep momentum alive on Hennepin Avenue by creating an arts hub sprinkled with complementary retail. She’s not overly concerned by the recent departures. “Changes are natural in retail,” she said. “We don’t need to get overtaken with fear.”


A friend of T.C.Sidewalks is back up and blogging, a few posts a week on urban studies, if his homework will allow it. Check it out The Gross Report if you haven't already...

I love the idea of building buildings over interstates...

As the ever-interesting former MN city blog AUWUP says, it's a great way to connect across the epic border divide that is an interstate highway, which can prove to be severe barriers to growth and pedestrian walkability. Plus, their linear uses of space end up serving as perfect catalysts for large unwalkable land uses, like Convention Centers, parking lots, or Big Box stores, so that freeways become veritable bastides of urban life, literally 'walled cities' where downtowns become little islands of commerce surrounded by unpeople'd industrial and residential uses.

Well, in my mind, Downtown Saint Paul b/w 10th and 5th Streets would be an excellent place for some of this over-head freeway building/bridging... as would Nicollet Avenue on the edge of Downtown Minneapolis.

Of course it'll never happen, unless the city/state funds it itself (which it won't). Its amazing to me that Seattle is still one of the only places where this kind of thing has been built.

Apart from medieval London and medieval Venice, that is... 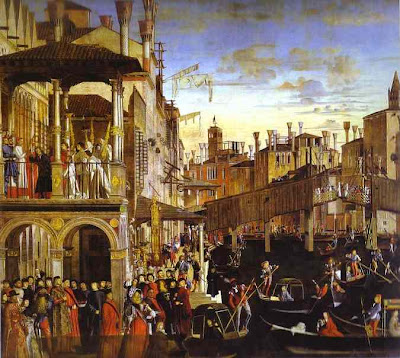 [Carpaccio's Healing of a Madman, showing buildings which spanned the Grand Canal in Venice, over the famous Rialto bridge c. 1494. -- h/t Olga's Gallery]
Posted by Bill Lindeke at 4:08 PM

(1) Thanks for the mention!

(2) Regarding FTA's citing of big-dig cost overruns in justifying cutbacks on DC metro funding: Sure, it's a convenient and probably disingenuous political argument. However, it's also arguably a very real political argument. At this level of funding, the feds are indeed responsive to public opinion. The Big Dig went over budget by billions, and the public was not happy.

That said, the Bush administration has never made transit a priority, as we all know, unfortunately.

I found a great deal of helpful info here!