The Pioneer Press had a cute little fluff piece today on attempts by suburbs to brand themselves, describing how city councils, chambers of commerce, or whoever's in charge has spent a bit of money on logos, mottos, &c, in order to distinguish themselves from competing municipalities, in order to attract business, development, and taxable capital. For example:

Cities can spend as much as $25,000 on branding consultants. Local businesses paid for the $3 million to $5 million rebranding campaign in St. Paul and Minneapolis.

"Some of the suburbs have a greater identity than others," said Louis Jambois, executive director of the Association of Metropolitan Municipalities. "It's worthwhile for those communities to think about what their identity is."

They even have a fun little quiz, inset at right, that lets you try to identify the motto with the town boundary... For example, try and guess which city has "Think Hopkins" as its motto! (Hint... It's Hopkins!)

The apparent efforts reminded me of the conclusion of Louis Mumford's The City in History, an epic quasi-modernist tome from the pre-eminent public intellectual/urbanist of the 20th century, where he describes his rather grim prediction of the "potentialities" of the American city post-1960. In describing the likely end of urbanization, a grim path that he charts from the beginnings of agriculture to 50's American suburbia, Mumford writes in his typical bombastic manner,

And so today: those who work within the metropolitan myth, treating its cancerous tumors as noraml manifestations of growth, will continue to apply poultices, salves, advertising incantations, public relations magic, and quack mechanical remedies until the patient dies before their own failing eyes. No small part of the urban reform and correction that has gone on these last hundred years, and not least this last generation -- slum demolition, model housing, civic architectural embellishment, suburban extension, 'urban renewal' -- has only continued in superficially new forms the same purposeless concentration and organic de-building that prompted the remedy.

Surprisingly, given his instrumental position within the 20th c. power structure, Mumford is arguing that surface alone cannot create urban spaces. (He's also an interminable windbag.) Mumford's ideal city was a mix of city and country that maintained neighborhoods and communities, something along the lines of Ebenezer Howard's Garden Cities or the FDR-era Greenbelt towns (which he helped to promote). 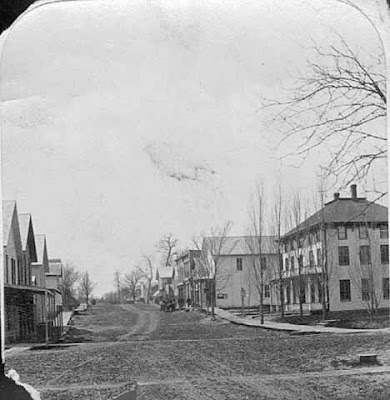 [An Excelsior street in the 1880s -- Image from MN Historical Society]
In that light, its interesting that Hopkins was one of the places I went to last week, in an attempt to tour the metro area's older suburbs. Along with Hopkins, I went to Deephaven, Excelsior, and South Saint Paul, all places that developed along streetcar lines in the early 20th century. (Excelsior is much older than that, actually. It dates back to being a resort town at least since the 1880s...) Hopkins has an charming main street that seems to stretch on for miles, with a movie theater and host of shops; Excelsior is beautiful and historic on its point jutting out into the lake (even if their Chinese food sucks); and South Saint Paul has an absolutely riveting historical story, having once employed thousands of workers in the meatpacking plants, and still boasts a very nice main street with diners and restaurants worth frequenting even in winter's coldest climes.

Suburbs like these, and even suburbs built later, would do well to heed Mumford's advice... Creating memorable places is really the key to attracting people and business to your area. Cultivating streetcorners and sidewalks worth walking on, emphasizing historical landmarks like a watertower, old church, library or city hall, and trying to get people to come together physically in the same spaces at the same times are all ways to really brand suburban cities, and to replace empty spaces with memorable places.
Posted by Bill Lindeke at 4:31 PM

each one of those symbols are perfect to represent any state of the nation, but the best of all is the one with the texas shape.

Congratulation for the great post. Those who come to read your Information will find lots of helpful and informative tips. Brand Consulting Services CA