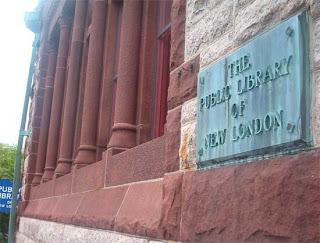 The sidewalks of New London are treadworn and old, and they'd speak volumes if you could dig down beneath the surface and look on layers of structure, amassed like filo dough or limestone or onions or lasagna. Leaves and pages of history Settled in 1646, its about as old as you're going to get in the New World. It was the heartbeat of whaling and fishing, men in ships putting out to sea for years in search of oil, settled first by the puritans or the Brits, before the many small revolutions of this country. It's easy, therefore, to get lost in New London, to wander along streets that follow twists and turns, forming rings around each other like a Pilgrim's Path. These are streets that slowly formed, like tree rings leading round the older parts, and on a cloudy grey day, like the day I was there, there's no way to tell where you're headed. 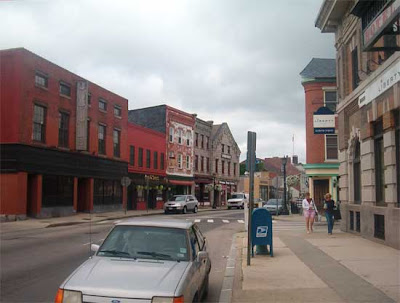 [A grey summer's day on the blustery coast, and two women walk down the wide sidewalk, through the mzaze of forgotten buildings. Do they know where they are?]

New London today has a lot of the same thrills and disappointments of many of the cities I visited on my eastern Amtrak tour: It has the history of Savannah, without any of the historical tourism. It has the old industrial stock of Durham, without much of its gentrification and re-use. It has the maritime feel of Babylon, without stores selling WASP'y boat shoes. New London's sidewalks wind through narrow streets, surrounded by old Victorian warehouses, and lead down a rather steep hill to the wide mouth of the Thames River, which opens onto the Long Island Sound, which opens onto the Atlantic. The riverfront forms a broad harbor that was for a long time the lifeblood of this town, as ships rolled in and out like rabid clockwork. Like most of these places built on past technologies, there's a lot of nostalgia surrounding the river... nostlagia, shipyards, ferries, and docks. And unless you brought your nostalgia machete, its fairly difficult to reach the river on foot, these days. You have to cross the railroad tracks, the busy stretch of iron between Boston and New York. 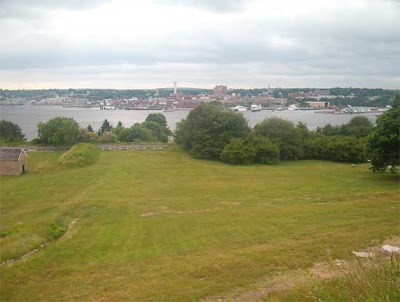 [New London as seen from the old Fort on the far side of the River Thames.]
I wasn't the only one walking around New London that cloudy summer weekday. I found a coffee shop overlooking the harborline, and it was the kind of place I enjoy, where all ages of people gather, students to retirees, all coming to have conversations about religion or book clubs or weather or nothing. Of course, it was probably the only coffee shop in New London, so maybe nobody had a choice... 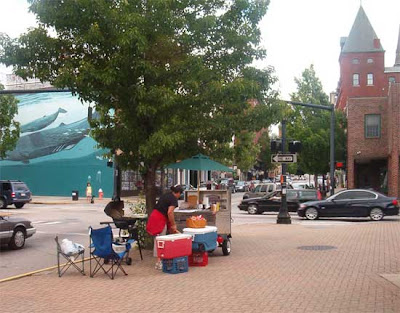 [This hot dog vendor was granted a municipal monopoly.]
The other citizens of New London that I encountered on the sidewalks were locals, people who lived in the deserted downtown where nine out of ten stores were shuttered and dark. For example, I came across a friendly man with few teeth who told me that he walked from New London to Niantic each day, a distance of 5 miles, simply because he liked to walk. I walked with him along the street for a block or two while he told out of the side of his mouth how nice it was to walk and live downtown. There's an old downtown hotel that he told me about, a massive twenty story brick building, which is apparently now subsidized housing. New London had a few little art galleries, including one next to what looked like a porn shop, but most of gorgeous downtown buildings were pretty empty and unused. 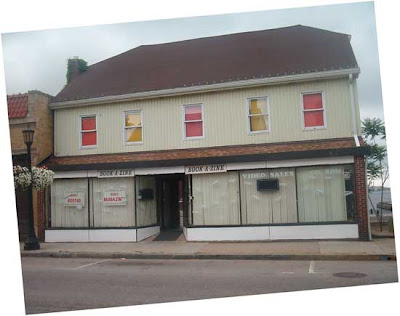 To my midwestern eyes, it certainly seemed like New London could become a beautiful place, filled with pottery shops and yarn stores. But I guess tourists prefer the pastoral landscapes of Westchester and the Berkshires. And I suppose nobody would commute the hour and a half (two hours?) it takes to reach either Boston or New York, though if the US had a faster train system New London might become a nice little retirement community. 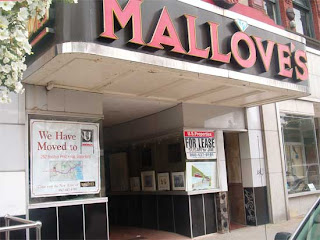 The sidewalks are just about perfect, though, wide and interesting, or potentially interesting if the shops weren't nearly all closed... like Mallovers Jewelry shop, which declares on a sign in the window both their pride in their longstanding history as part of the downtown, and that they've recently moved to the nearest mall. There's not much down here, save for the aforementioned art hangouts, porn purveoyors, the threadbare corner stores, and a single hot dog vendor cart, staffed by a women with a folding chair. In fact, after my walking friend, I came across a pair of industrial gentlemen hunched over a sidewalk bench. They looked municipal, and quite pleased, I went up to them and asked, "So, you're putting in new benches, eh?" (... knowing as I did and do that benches, places to sit, are one of the premier sidewalk amenities that no small city should be without...). "Nope, we're taking this one away," the burlier of the two men said. "Apparently someone doesn't like who's sitting on it," said the other guy.

I had nothing to say about that. You can't make people go away by removing benches, any more than you can make people come by adding them. No, these New London sidewalks lack luster, but have spades full of history and potential. 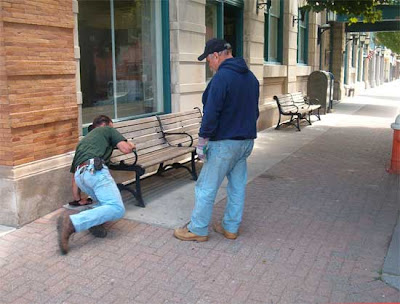 My grandparents used to live in New London and used that same library! They didn't know each other when they lived there because he was 5 years old, so hung out in the more adult reading section and grandma was in the children's section. Thanks for reminding me of this part of my family history, Bill. I have New London blood in me.

23jj Brilliant post, I think you're doing an important informative blog, specially with this wordy blog! however, the harbor was considered to be the best deep water harbor on Long Island Sound.

Diana said...
This comment has been removed by the author.
3:44 AM


Radio Ann...there was no children's section in that library until the 1970's. Next door to that building there used to be the most charming little gray house. It was the children's library. One enormous (to a child) room with child sized tables and chairs. Hundreds of books lining the walls and a neat little desk where the librarian would check your library card then stamp the book card with your return date.
I was saddened to see they moved the children's books into what we called the main library.

That's probably why they never met until they went to college in Santa Barbara! You're kinda petty, Diana...but I won't let it spoil my most excellent library story! #getalife

Do not use all of these Private Money Lender here.They are located in Nigeria, Ghana Turkey, France and Israel.My name is Mrs.Ramirez Cecilia, I am from Philippines. Have you been looking for a loan?Do you need an urgent personal or business loan?contact Fast Legitimate Loan Approval he help me with a loan of $78.000 some days ago after been scammed of $19,000 from a woman claiming to be a loan lender from Nigeria but i thank God today that i got my loan worth $78.000.Feel free to contact the company for a genuine financial Email:(urgentloan22@gmail.com)