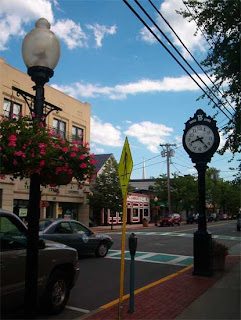 The only thing I knew about Babylon NY, located about a third out on the South shore of Long Island, was that it had been the home of Robert Moses, scourge of American cities. If you don't know who Robert Moses is, I urge you to put aside a month, sometime in the near future, and read The Power Broker, Robert Caro's 1974 Pulitzer Prize winning biography of Moses. It's a fantastic biography, combining drama and painstaking detail with the rarest of ease, and in it you learn the dangers of concentrated power as Caro tells the saga of Moses's insane forty-year grip on New York infrastructure, building highways through neighborhoods and displacing hundreds of thousands of people, spearheading 'the projects', and singlehandedly yoking U.S. cities to the automobile for what will probably be an eternity. (On the other hand, the bridges he built haven't fallen down yet.)

So, needless to say, when I got to Babylon NY, the town where Moses parked his subsidized yacht, I was most filled with biblical trepidation... trepidation and a desire to somehow unearth the visible scars of Moses's mad genius. Would I find a Moses bust? Would it be the land of gated communities? Or hanging gardens? What I found, though, was a pastoral fishing village surrounded by well-manicured, sidewalk-free, and quite expensive real estate. 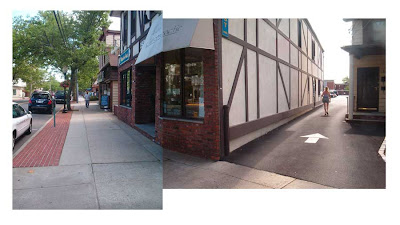 [One of Babylon's old half timber'd shop buildings.]
The other day walking along Raymond Avenue, I'd been struck by the neat way that the parking lot for Noll's Hardware was tucked neatly down an alleyway, behind the st 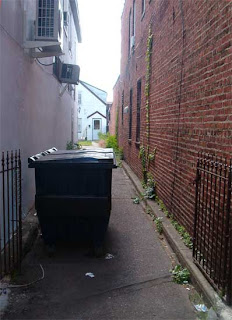 reetside storefront.
If these alleys marked University Avenue's industrial/St. Anthony Park seam, they were far more common in Babylon. Every street in the little downtown had a back alley parking lot. There were even whole houses tucked behind stores. (Here's one, pictured at right, for which the only access is this long dumpster-filled alley.) The little downtown is just a five minute walk from the Long Island Railroad commuter train, and features a host of old-school thrift-, paperback book-, antique-, and drapery-stores. It boasted a few grocery stores, and a number of Irish bar/restaurants that must have dated back to the South Shore of Long Island's economic fishing foundations. What struck me most, though, was the drive-through grocery store called The Dairy Barn, which uses a sort of nostalgic aura to entice people to buy milk and bread without leaving their driver's seats. 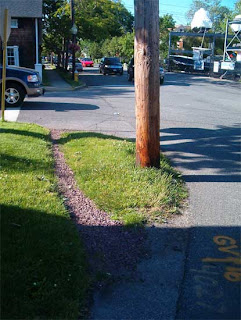 walkable aura... despite its lamppost flower planters (hanging gardens?), its inlaid red brick trim, and the delicate arch of its maple trees that lend it a precious authenticity... despite all that, I didn't' find an urban spirit in Babylon NY. For one thing, the 'downtown' (or village center) is really sparsely populated. There was one building on a main corner that seemed to be undergoing condo-i-fication, but you'd be hard pressed to find an apartment to rent in that town. Similarly, Babylon seemed almost entirely dependent on cars to get aro 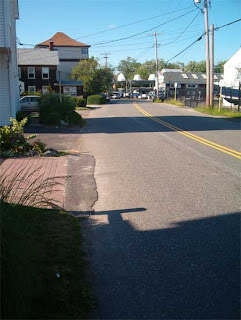 und. The streets date back, I'm sure, a long way, but couldn't they put in some bike lanes or something? (Of course, the same could be said of recent Sidewalk of the Week winner, Carter Avenue, which could serve as a dead ringer for Babylon's village aesthetic.)

I went on a long walk from the downtown to the Babylon harbor, passing along a suburban-seeming sidewalk winding through the lawns of suburban houses. It seemed almost exactly like any of the nicer Twin Cities suburbs (e.g. Edina, Roseville), complete with two-car garages and the proverbial picket fence. most of these houses must have been built after Moses completed his Long Island highways (ever politically astute, he called them 'parkways'). (Indeed, it was Moses's highways which spearheaded the development of suburban Long Island, cultivating Levittowns at an astronomical rate.) I walked on the sidewalks of Babylon, and when the sidewalk disappeared I walked on the edges of roads, through yards, and around poles. I walked but didn't find any sign of public space... The best I could do was the entirely benchless municipal pier, where I sat on the pavement with a book and stared out at the sea.
Would Moses were here, I'd kick him in the balls. 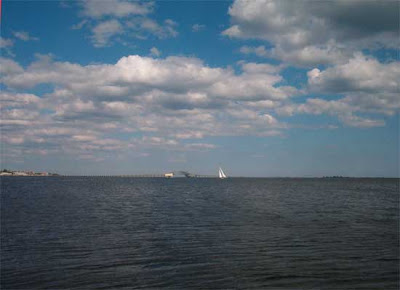 I was pretty startled/amused/bemused to come across this critique of Babylon. My parents had a store on Deer Park Avenue during the 50s and 60s, and they had a house in the Village after I finished high school (in NYC), so I knew the place pretty well (though I haven't been back for 30 years).

I don't think it makes sense to examine its "urban" characteristics, because it's not really an urban place. It's a fishing port, a former resort (you used to be able to catch a ferry to Fire Island or Oak Beach) and a commuter suburb. As a suburb, its core developed before Moses built his parkways and expressways, so it's fairly compact, unlike postwar sprawlburbs.

I don't think its useful to look at Babylon through the lens of Moses' biography. It's true that he lived there for a long time; he moved there because it was a convenient commute on the LIRR (as you may know, he never learned to drive). But he didn't participate in the Village's life, and he wasn't particularly popular, and the publisher of the Babylon Leader, the local newspaper was one of his fiercest critics.

In the end, his influence is probably more visible in the former potato fields that suburbanized after the war, than in the village that had its character formed before he got there.

Wow, you really don't seem to get Babylon Village, do you. I live in town and love it. I moved from Brooklyn after too many years of cramped spaces. To me, the Village has "just enough" of everything for me to offer a very balanced experience between small town and more urban offerings. I think that to measure it in terms of how urban it is misses the point completely about why people live there.

Obviously you limited your walk to the southeast portion of the Village. IF you had taken the time to walk the shorter distance west, you would have discovered Argyle Park. This park has a playground,lake,boat slips, gazebo,running/walking trail, and plenty of benches to read your book.

Heading NORTH you would have found the Park Avenue tennis courts, handball wall, playground, and footbridge to Southards Pond.This park is one of the most pristine sites with horse,bike,and running trails, as well as a fresh water fishing spot. There are also plenty of Rental Apts on Park Avenue which are a stone's throw away from the Downtown Village and the LIRR. While this may not be Minnesota, we have a ton of recreation here.

"The Village" we called it.I spent all of my summers there as a kid.We had a bungelow at 13 East Court down Fire Island Ave.Smittys Fishing Station was at the head of our canal and I* worked there cleaning 40 wooden skiffs every weekend.I loved all the kinds of boats and the cranky outboard motors of those days. I remember Austins "snuff box", so orange and fast.

I've been there, specially in Long Island, most of the people always enjoy the Village of Babylon located within the town, The region was one of the best in 1986 and you must add something about it. 23jj the main point is the biblical trepidation, because the town has a total infrastructure.

That view at the harbor is definitely breath-taking that it has helped calm my nerves. I hope that you could post a bigger picture of this as I think that this could be a great wallpaper as well!