Like many white, urban, politically left people, I’ve been struggling to come to terms with the reality of the racism and state-sponsored violence that has unfolded in my cities over the past few days. It’s taken me many days to even begin to process how these events intersect with my preexisting worldview and concerns. I began by cleaning up broken glass at the light rail station a few blocks from my house with some strangers, talking to neighbors, and attending a demonstration. bBut mostly I've been staring out the window or at the news.

One of the few things that gives me hope after another traumatic killing, nights of devastation, and yet more violence perpetrated by police, is that our sense of what is socially and politically possible is rapidly changing. I am trying hard to listen to the voices of folks who are most impacted by police brutality and a system that condones it. I will try to follow their lead.

At the same time, I am just calm enough where I am can begin to connect these critical discussions into the work I’ve been doing for many years writing about the urban geography of the Twin Cities. I am rethinking how policing and racism touches on many topics that urban planners, geographers, and transportation advocates care about, and I promise to keep discussing this as much as I can. Today, I want to try and connect the killing of George Floyd and its violent aftermath into the broader context of Twin Cities and Minnesota politics.

Yesterday, listening to MPR and appreciating some of the great work they’ve been doing, I heard Marianne Combs say something I’ve heard many times before: "Minneapolis has some of the worst racial inequalities in the country." She went on to list unemployment gaps, housing, and income gaps between black and white people, all of which are primarily regional in nature.

This is not to let Minneapolis city leaders or any white people living in the city off the hook, but using “Minneapolis” as a synecdoche for Minnesota racism is part of the problem. It should be very clear by now that the crisis caused by the Minneapolis Police Department and the systems that support them is a regional and statewide issue.

This becomes obvious as you see Minneapolis elected officials describe just how difficult it is to change their Police Department. It's extremely difficult because empowering the deadly Police Department to use violence on black and brown people in Minneapolis has been a consistent policy platform for both parties, especially state Republicans, and they have erected many barriers.

Here’s just one, in retrospect rather stunning, example that took place just a few months ago at the State Capitol in Saint Paul. As reported by FOX 9:

Meanwhile, using an anecdote about "a grandpa from Lakeville" witnessing "an argument" on a light rail train, the media is framing transit/the city/black people as synonymous with crime.

That kind of story has repeated in mind-numbing fashion for generations. Here’s another one of the literally hundreds of recent media examples. It's a report from March 10th (!) about “gun violence” on WCCO news:

At this press conference, Minnesota Republicans used scare tactics to demand more Minneapolis police officers in general, and on more police on light rail platforms and train cars in particular, especially in Downtown Minneapolis and in communities of color. State Senator Roger Chamberlain of exurban Lino Lakes — population 20,000, 20 miles north of downtown Minneapolis, 94% white, and which includes a state prison — says at the podium:


If Minneapolis and Saint Paul cannot adequately protect their citizens, we’re going to help them do that. We all have constituents that go to these two cities. We need vibrant inner cities. They need to be safe.

It seems like ancient history, but people wondering how the Minneapolis Police Department got so bad, how they became an unaccountable, out-of-control, un-reformable force for consistent racism and violence, this kind of state politics is one of the fundamental causes.

Especially as the so-called “rural/urban divide” has become a central political focus of the right wing, this cry for so-called law and order has intensified. For generations, media and political narratives about  “downtown”, “the cities”, or “transit” has formed a chorus of racist dog whistling from the right wings of both parties. As a result, the way that the Minneapolis Police Department thinks about the city of Minneapolis, and the especially the black people that live there, is a dark crystallization of the views of many people in the suburbs and exurbs and rural parts of Minnesota.


Do a quick search — Star Tribune downtown crime — and see it for yourself. Just before COVID-19 hit, spurred by right-wing state officials and business interests, the Star Tribune and television news were overflowing with articles about so-called downtown crime or pearl clutching about disorder on the Twin Cities light rail system.

Meanwhile, in the big picture, crime is lower than it's been in generations. Specifically in Minneapolis, as local media critic David Brauer has chronicled, crime has not been particularly increasing, downtown or elsewhere. Brauer has spent years correcting the local media every time the news fills with another round of so-called crime stories. 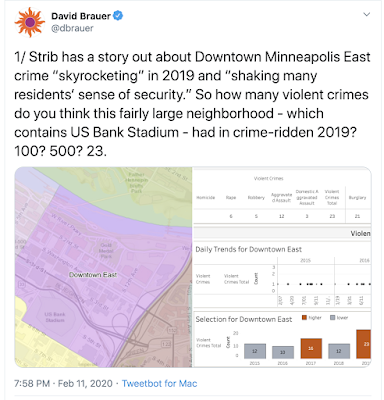 It’s important to remember all of this as we begin to pivot to a discussion about policy changes. I am hopeful that, after systemic police violence has been so clearly exposed, so-called law and order politics that pervades our bleak two-party system will not be tolerated.

First, white people like myself, living in Minneapolis and Saint Paul need to dramatically rethink their relationships with their black and brown neighbors. But changing our politics will also be up to people living in the Twin Cities suburbs, nearly all of which are 80+% white, and where the vast majority of Minnesota’s wealth can be found. White people in Minnesota need to consistently reject so-called law and order narratives, stop demonizing “the city” and by extension black and brown people, and take seriously the fact that the segregation, inequality, racism, and the police themselves are the problems.
Posted by Bill Lindeke at 11:25 AM

Curt Lennix said...
This comment has been removed by a blog administrator.
7:44 PM

Unknown said...
This comment has been removed by a blog administrator.
8:35 AM

Unknown said...
This comment has been removed by a blog administrator.
3:26 AM

MAGS PREMIUMS said...
This comment has been removed by a blog administrator.
8:11 PM

Never thought that binary could been of great help, because I have lost a lot trying to make profit, until I met Mr George Arthur who has made me bounce back on my feet with smiling face making me recover all I have lost to scam broker through his master class strategy you can reach him Via whatsapp+44 7955 738814 or email him on georgearthur097@gmail .com. My regards to him