One of northeast's coolest dive bars is having an historic bash this Sunday. It's the Northeast Yacht Club, located at 8th and Marshall right by the Plymouth Avenue bridge. And they're having their 120th birthday this Sunday. Details below. 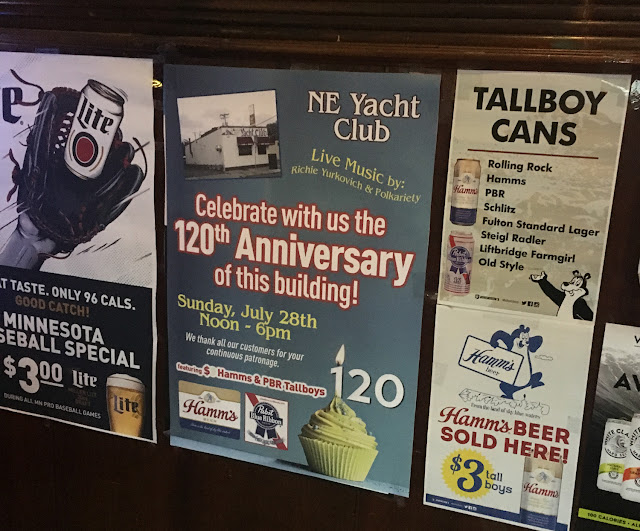 The Yacht Club is one of the many bars in Closing Time, my upcoming book on bar history with the Minnesota Historical Society, that I've co-authored with my good friend Andy Sturdevant. (It's coming out in October and you should buy it!)

The bar began as a Glueks Beer tied house, and used to be called the Town Pump. I have a whole chapter on the bar in the book, but I also wrote about it in my Dive Bars of Outer Northeast Guide Booklet (available for purchase!).


There are different so stories about who named this bar, whose joke it really was. By one account, it was the Poles, famous for self-deprecation. “Let’s call it the Yacht Club,” they said. “That’ll show those snobs up the hill.” This one is probably true.

I’m fond of the other account, told to me by a regular one afternoon. You see, if you go to the Yacht Club you'll probably overlook the well-appointed newspaper rack. But if you stop and think about it, it's unusual for a bar like this to have copies fo the Wall Street Journal for sale.

I believe that this stack of papers is perhaps the last remnant of the old Yacht Club newsmen culture, as this bar used to be a hangout for newspaper workers. The place got its name because of a running joke amongst Star and/or Tribune men poking fun at the city’s class hierarchy. (Example of old-school newspaper humor: “let’s retire to the Yacht Club gentlemen") The other ope newsmen joke was that they were working on the "white edition" while at the bar, reminiscent of the old chestnut about “sailboat fuel.”

By some measures, the Northeast Yacht Club is no dive. It’s too well-kempt, with food attentive staff, mostly rule clientele, and a logo available on tee-shirts. Yet it remains a large space with a pool table and menus that fit roughly onto an index card, placed in those plastic doo-dad holders on the bar or small tables along the wall. What you call it is up to you.

Once I was avoiding vague duties at the Yacht Club toward the end of some wintertime daylight. A handful of old-timers had pulled themselves snug up to the long wooden bar, and I set myself next to a small window to watch the bare trees framing the Plymouth Avenue bridge lose their silhouettes. My daydream was interrupted by an older, plaid-shirted man placing a scrap of yellow paper on the table before me.

“You need any veggies?” he said, and halfway grinned before turning back to talk weather with the regular men. 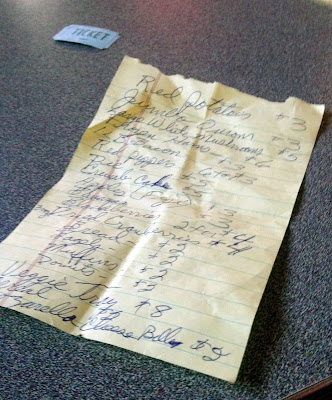 Sadly, though my fridge was bare, I didn’t have the pocket change. The prices were as reasonable as the goods available, and you can’t beat dive bar delivery.

Such moments of surprise and entrepreneurialism are the hallmark of a great establishment; nothing trumps the timely arrival of a tamale lady or a man peddling roses. I imagine that today’s underground dive economies are a pale shadow of their former selves, that in the old days wandering vendors were staples holding these rough places together.

The Yacht Club is one of a handful of Northeast joints that have been halved in height. It you examine the rooftop corner by the entrance, you’ll see the angled space where a staircase used to climb between the first and second stories. Past the far corner of the bar itself, old photos hang along the wall depicting its younger days. It used to be called “The Town Pump” because of the well-used well just outside. (Imagine the days of women or children gathering water, carrying it back to hand-built houses.) At some point there was just enough of a fire that the powers-that-were decided to decapitate, leaving the first floor somehow intact.

I’d guess that few people today imagine that this place was once more than it is, one-story building being commonplace now. But a century ago such spatial profligacy was unthinkable.

The other Yacht Club rumor is that there was once (and still is?)  a tunnel through the basement. This was once the half-way staging post for prohibition booze, smuggled underground from the river and over to Elsie’s bowling alley across the street. Of course, the prohibition days were murder on dive bars, literally, figuratively, and in other ways too. One can only imagine the secrets buried in the ground along the Mississippi. How many cops blind eyes were turned at this corner? How many careers begun?

There should be monuments to the old river tunnels, which today seem like an endless age ago. But at least the dive remains, the only living landmark.


Well, I stopped by the Yacht Club yesterday to drop of some photos (displayed here), and one of the old timers there swapped some stories and mentioned the tunnel.

Now, lots of old bars lay claim to a smuggling tunnel. You take such stories with a grain of salt or a handful of beer nuts, but in this case, he offered to show it to me.


That dark arch heading off to the left is the Town Pump / Yacht Club smuggling tunnel under NE Marshall Street that heads toward the Mississippi River. I have seen with my own eyes and it looks as creepy as you would think. Imagine a century ago unloading crates of whiskey barrels of beer, or anything else that might need to get smuggled from the Mississippi riverbanks near by.

Anyway, stop by the Yacht Club sunday to celebrate their rich history, as one of the city's greatest dive bars lives on.

Very significant Information for us, I have think the representation of this Information is actually superb one. This is my first visit to your site. Luxury Boat Rental Miami

Thank you for your article. It will definitely help me a lot...

I love the product for its ease of use and ease of instilationi.yachts