2017 will not likely be on everyone's list of "best years of all time." In many ways, the last year was a festering dog poop left on a public boulevard, towards which nobody claims any responsibility.

That said, there were some good moments on this blog. In the off chance that you have missed some of them, here is my list of top 20 Twin City Sidewalks posts of 2017!

This was an opportunistic post sharing an archival "board game" poster that was, at the time, a ripping critique of developers and corruption in Minneapolis during the 1980s. Sort of a flashback moment, and something that was interesting and unusual enough to me that I had no choice but to share it with the readers of this blog.

An only-slightly-snarky response to an email from a friend of mine about the success (or not) of the Cleveland Avenue bike lanes. I feel a little bad about this one, but responding to criticism is one of the best parts of having a blog. If only I got more angry letters to respond to!

This was an off-the-cuff think piece about why I like the Duluth Reader so much. The Reader is Duluth's weekly community paper, and it reminds me a lot of how City Pages, the Twin Cities Reader, and a few others used to function.

Just some thoughts on the community media landscape, a topic that I've been closely involved with for many years here in the Twin Cities.


#17. Public Character #7: Mark, who hosts a Beanbag League in his Yard off West 7th Street

Sometimes you happen across something cool and interview the people involved. This was a horseshoe tournament off West 7th street that caught my eye. A great example of public space in the city!


#16. I, For One, Would Like to Welcome our Garbage Overlords 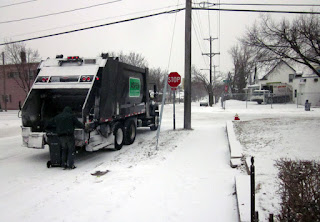 A defense of the city's then-contested organization of garbage collection. Here I tried to talk about freedom in a new way, not just as freedom from government, but as freedom to act collectively. There's something liberating about being able to decide things as a city, as a group, and to cultivate systems that allow things to happen at larger social scales. That's a kind of freedom every much as important as individual liberties, and the idea of civic and collective action is sorely needed these days.

Saint Paul finally making this common sense change is a good sign to me.


#15. Sunset for the Sunrise, Last of the South Minneapolis 3.2 Joints and And Then There Was One... Farewell to the Bee Hive, the Twin Cities' Penultimate 3.2 Bar

A pair of odes to 3.2 bars that closed last year. It was a rough couple years for dive bars, but such is the nature of dive bars. (This post led to another article that I wrote for the City Pages about the re-incarnation of the bar.)

By the way, long live the T-Shoppe!


#14. Close Horizons of the Winter City

A short essay with some thoughts about horizons in wintertime. You can appreciate all kinds of weather, and this is one of the ways that it works. The relations of space, sight, the living world, and the cold air come together to create our sense of place. 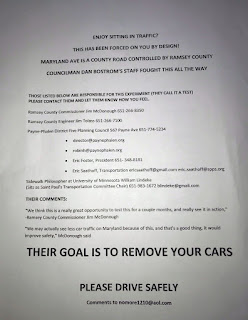 A from-the-heart hot-take reaction rant dealing with on-the-ground events around probably the most important street design event in Saint Paul over the past year: the 4-3 conversion road diet on Maryland Avenue. During the unveiling of the "test" change to the street, an angry man began fliering people stuck in traffic, and even put my name and phone number on the fliers he was handing out.

This post was my attempt to get people to counter-act the misinformation, and submit positive comments about safety and street design priorities to Ramsey County. Despite the angry man and his flyers, people in the community ended up changing the conversation, putting up signs, and keeping the road diet intact for another year.

I've been railing against "four lane death roads" like Maryland Avenue for years now. The success of the safer Maryland Avenue design is one of the best thing that happened in 2017!


#12. Four of my Favorite Urban Drawings

Another post I'd been thinking about for years, but finally got around to writing. It's simply a collection of four of my favorite urbanist illustrations. These are all great, and I put them together in a post and attempted to explain why I think they're so great.

I even added a bunch of great honorable mention cartoons, so this was fun.

Another hot-take reaction piece that was written as a response to a front page Pioneer Press piece about changes to community groups in the North End, my old neighborhood. Here I go into some detail about what's happening politically in the area, and why I think it's so important.

This was heartfelt, informative, and important to me, and I was trying to shift the narrative around who gets to speak for and represent a community that I care about.

In the vein of Jeremy's Vanishing New York, I've been writing more odes to things that I liked that are closing down. This was one of them, an unfortunate victim of the new soccer stadium.

(See also, Red's Savoy, Last Bastion of Greater Lowertown, Finally Crumbles, Another Dive Goes Down as Tracks Bar Hits the End of the Line, and Loss of a Scene as the Triple Rock Social Club Closes Down.)


#9. Another Predictable Tragedy Shows Need For Change on West 7th

When someone is killed on unsafe streets in Minneapolis and Saint Paul, I often feel it is my sad duty to call out the street design as a huge factor in their death. It happened again a few weeks back when Jose Hernandez was run over and killed by a speeding driver on West 7th Street.

One of the most promising things to happen in 2017 is that the city is finally making its first steps toward changing West 7th for the better, by investing in transit that might (hopefully!) trigger long-needed safety improvements.

This was a heartfelt and angry post about Hernandez' death and why that kind of change is long overdue.


#8. What Should We Make of Star Tribune Endorsements?

One of my two big election posts, both of which were the most read posts of the year. This one was about the Star Tribune editorial board and its recent track record of endorsing more and more conservative people for local office.

The post is a bit flawed, but has lots of good data and I hope it helped improve the conversation around the city election in Minneapolis this year. It certainly got a lot of traffic! 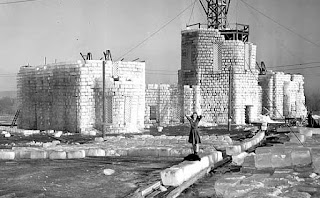 An premature homlly for Saint Paul's grand ice palace tradition. I might have written this one too soon, as some crafty folk have decided to make a "palace" this year after all, albeit with only a 1/5th of the usual number of ice blocks.


#6. A Christmas Prayer for Streets and Sidewalks

Something I wrote for a church service. I hadn't been to church in many years, but a sidewalk prayer can still get me in the doors.

Pray for your sidewalks, folks, if the spirit moves you.


#5. The Everyday Surrealism of Automobile Violence

One of the three most-read posts of the year, this was a reaction to a crazy crash that happened in Saint Paul this year. It was the kind of crash that's defies the odds and really sticks in your mind, but in another way it was the "exception that proves the rule." The violence of crashes happens every day, but rarely in such a crazy way.

This was a post written in the wake of tragedy that attempted to point that out.

One of my favorite posts in a while, and something I've been thinking about for years. I was triggered when I was browsing through the streets.mn forums one day, and came across a joking reference to the Saint Paul "most livable" slogan.

Well, hot on the heels of the Ford site "livable" debates, it really stuck in my craw and I tried to write a good rant about why I think the city's slogan needs to go away quietly.

Maybe the new mayor will retire the livable hucksterism?


#3. An Open Letter to Charles Hathaway 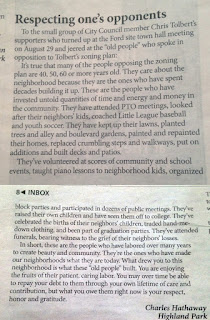 Another heartfelt reaction piece, this one to a Highland Villager LTE by the chief organizer of the anti-Ford Site movement. I tried to respectfully and honestly respond to his letter. This post was was well-read and hopefully helped more people understand a pro-Ford perspective.

The passage and widespread support for the city's Ford plans, in spite of the people like Hathaway who really tried to undermine them, was another big positive for 2017. Let's hope it's a sign of good things to come in the coming year!

The other of my two big election posts. Supporting Melvin Carter for mayor was a decision that, despite my initial caution, turned out to be pretty easy. I waited until there were some clear differences between the candidates about some of my key issues, and tried to lay them all out in my post here.

This one got a lot of traffic! And it turned out that Mayor-elect Carter did not need much help, but because he handily wiped the floor with the other people running for office. Carter's easy win was one of the biggest pleasant surprises of the year, and might point to a shift in the political landscape in Saint Paul.

My favorite post of the year, a guided tour of the worst places to walk around Saint Paul's downtown. This was written in honor of the national Walking Summit that was held in Saint Paul this year.

Typically when events like these take place, folks gravitate to the nicer and more walkable streets. I wanted to offer up a contrasting view, and I think [SPOILER] I'm going to do an actual tour sometime this year where a group can take this trek in real life.