Short short version: A busy bus will now be nicer with pre-pay stations, double-door level boarding, fewer stops, some signal priority [not enough though] and higher frequency. [This is basic stuff that all the city's key bus lines should do. It would make a huge difference, but for some reason this kind of basic urban transit stuff is difficult to find funding for, even while we spend gobs of money on all sorts of other things.] There will be [was] a bunch of festivity. It took 5 years to do this. There will be wi-fi. There will be a "shakedown" period to work out glitches. [Shakedown! Is that like when the transit agency takes away your parking spot and puts a bus stop there instead?] Neighbors are worried about parking because of "stations attracting a glut of park-and-ride customers." [This has almost nothing to do with parking. In fact, I have heard that riding buses is often a key way that people avoid parking altogether by not driving in the first place.] Article includes brief discussion of West 7th, where another similar bus project was originally scheduled.


Headline: Soccer stadium redevelopment headed to hearing; Though the ink is not dry on the stadium site plan nor the Midway Center master plan
Author: Jane McClure

Short short version: A soccer stadium is being planned for a currently-existing parking lot and strip mall site. There [was] a public hearing at the Planning Commission. [Not a ton of speakers there for some reason! A few people against stadiums, the billionaire soccer team owner, and some neighbors who are cautiously optimistic. Commissioners raised questions about gentrification and storm water plans.] Article includes overview of the latest site plan, which will keep many of the existing fast-food and chain restaurants that aren't directly on the site. The liquor store will be torn down and become a temporary [temporary??? Like the ones around the Metrodome?] surface parking lot. Article quotes the strip mall owner saying that it would be "economic suicide" to leave the site as surface parking. [That's actually a bit reassuring that the profit motive is what's driving him. Anything else would be dubious, I think.] Some people on the citizen committee are more optimistic about the overall site plans than others.

Short short version: The city has a lot of areas where only residents can park on the street. One of them might change by allowing one- or two-hour parking. Neighbors are worried about the parking. [It doesn't help that these kinds of time limits are basically unenforceable. I suppose that concerned neighbors could do some vigilante-style parking enforcement with watching constantly and calling in offenders. By the way the city is thinking of changing how these districts are created. The current system is extremely staff-intensive, doesn't get evaluated, and difficult to change.] There is debate over how much and whether there needs to be public meetings to change rules around these permit parking areas.

Short short version: The city might rezone some property along Snelling Avenue. Properties near the new bus transit line might be re-zoned to have more mixed-use. The original study was delayed because of staff changes.A developer wants to build a five-story building along Snelling.

Short short version: The DNR is forming new rules for the "critical area" which is the Mississippi River in Saint Paul [and Minneapolis]. It's things like setbacks, zoning, open space rules. City planners are worried about bluff regulations in particular, and how they might limit development in the city. Also an environmental group wants to limit building heights. [Visual views are kind of a weird thing for an environmental group to work on, I think. The question I always have is, who gets to look? Who is seeing this and from where? And what are the trade-offs and opportunity costs at stake? If we limit density to preserve views does that not mean more sprawling development elsewhere, that might have a greater negative impact on things like rivers, birds, and ecosystem sustainability? I guess it depends on the situation.] The Ford site is also part of the conversation.

Short short version: There was a public hearing at City Council about whether to have garbage trucks be "organized" geographically instead of a free-for-all. Article includes history of trash collection in the city. There was a survey. Some people think it'll be cheaper, less damaging to the roads, and reduce dumping. Others are worried about small businesses. Neighbors are worried about noise, dumping, and disruption.

Short short version: The Public Works department wants to put bike lanes on Hamline Avenue but it will involve removing parking from one side of the street. Staff counted parked cars and didn't find that many. The street is on the bike plan. Some people like it, others do not. Some people are worried about speeding cars. Three years ago a new bridge was built to the South on Hamline that might or might not have bike lanes on it. [Having bike lanes here a good idea.]

Short short version: 18 out of 39 proposed proposed projects for a pot of city money will get funding.there's a long list of things that include lots of building improvements.

Short short version: There was a meeting at a neighborhood group to discuss whether an old theater that is being restored should be allowed to sell booze. Neighbors are concerned about "unintended consequences" and parking. [I think restoring an old theater is cool.]

Short short version: A [neglected] bike and ped trail that runs along the freeway noise wall is going to get a bit more help [money?] from MnDOT and the city to clean it up. The trail is in bad shape. The trail was built in 1984. [I still can never find this trail, often called the "sneaky trail" by my friends. Also they should improve its intersection crossings, which are quite dangerous, so I hear.]

Short short version: New streetlights and other things are going to cost money and property owners will pay for some of that. Article includes cranky quote about street lights from a property owner.

Short short version: There's a study to let people build smaller homes in places like back yards and over the garage but only in places near the light rail. Neighbors are worried about overcrowding and "low-quality housing." There will be a public hearing tomorrow on this

Short short version: The City Council voted to approve a new three-story eight-unit building in a spot where an old house was torn down on Grand Avenue. The building was rejected the first time for being too large. [It's actually less dense than the two 20s-era buildings on either side of it, and except for the fact that it has off-street underground parking, would not be so tall.] The developers received four variances for setbacks.Neighbors are concerned about traffic and parking, and "intruding on privacy." Article includes quote from worried neighbor about "mass and scale."

Short short version: An elementary school is being expanded. Article describes the school and the new things that will be there. Neighbors are concerned about playground being too close to the edge of the property and water drainage.

The opera I listened to this time was Porgy and Bess, which is kind of interesting because I'd only ever heard the music in jazz interpreted formats. 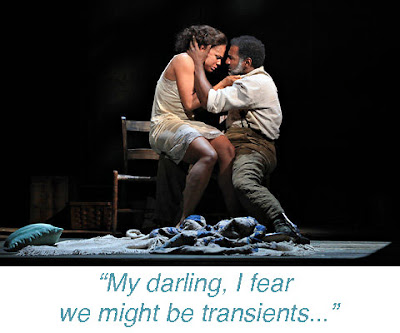