Another Predictable Tragedy in a Maryland Avenue Crosswalk

Another predictable tragedy happened today in Saint Paul, as a woman was hit by a driver trying to cross the street. She's in critical condition at Regions Hospital.

Here’s the Star Tribune story on the crash, which occurred at 8:10 AM:

A motorist in a vehicle "larger than an SUV" stopped in the right-hand lane of westbound Maryland and waved for the woman to the driver's right to enter the crosswalk and on Greenbrier and continue walking south.

Once the woman was in the street, a compact car came along in the left lane of westbound Maryland — where there is no stop sign or signal light to obey — and hit the woman.

"She goes flying through the air and hits the pavement," Linders said.

Everyday in Saint Paul there are a dozen moments like this. Most of the time, they end in a near-miss, a small bruise, someone jumping out of the way, or a squeal of the brakes as a car screeches to a halt.

But then every once in a while, someone swerves and doesn’t slow down. And then it’s deadly.

I can probably recite each one of these Saint Paul stories, where people crossing the street are killed by drivers. It’s endemic to the way we design our streets, as predictable and straightforward as one billiard ball hitting another.

This one, though, is a particular tragedy. After years worth of work by Saint Paul’s under appreciated street safety advocates, along with help from a grant and a local non-profit, Saint Paul is in the midst of the largest pedestrian safety campaign in city history. All through the year, police and community members are teaming up raise awareness of the city’s crosswalk laws by conducting stings

A few weeks ago, I did a story on the campaign for Minnpost, going out to the East Side to hang out, watch the pedestrian safety sting, talk to the police, talk to neighborhood advocates, and see what the campaign was all about.

The scene was pretty impressive:


This year, things are different because Stop For Me, an offshoot of the nonprofit Saint Paul Smart Trips, is launching a yearlong campaign, spread all throughout the city, to take another stab at changing the culture around the city's crosswalk law.

Partnering with neighborhood groups, the campaign is holding 32 two-hour crosswalk enforcement sessions in different neighborhoods, where police and safety-conscious neighbors set up stings at particularly difficult corners. According to Kyle Mianulli, the program’s organizer, in one week there have been five events, 529 traffic stops and 129 tickets handed out to St. Paul drivers. Each ticket runs $168. Here is a report [PDF] on the kickoff events on March 17.

Sgt. Jeremy Ellison is the lead liaison for the program from the St. Paul Police Department. According to Ellison, during any event about five police officers, together with a dozen crosswalk advocates, set up operation. Every five or 10 minutes during rush hour an unmarked cop car waits on a side street by a difficult crosswalk ready to pounce. A group of two or three people, some wearing high-visibility vests, approach the street, wave their hands, and step out into the crosswalk. To help with precise legal matters, the police place orange traffic cones exactly 193’ feet from the crosswalk.


And then last week the campaign came to the very corner where I live on the West Side, and so I volunteered at one of the sting events myself. It was pretty cool to see the operation in my own front yard, and I was mostly pleased at the enthusiasm for the stings displayed by the neighborhood residents (many of whom were young people watching from the next-door apartment). There were only a few egregious crosswalk offenders, and they all got tickets.

(Especially cathartic was the dude driving the big white Cadillac that sped up to go around the people trying to cross the street. It was some real schadenfredue when he got the $170 ticket.)

There’s only one problem. As good as they are, the stings don’t solve the problem. Not by a long shot.

In a moment of tragic irony, today’s crash happened at the exact spot that I featured in my story, the crosswalk at the corner of Greenbrier and Maryland, right next to the school playground in a diverse working-class neighborhood on a busy road on the East Side.

Here’s how I ended my piece on the crosswalk safety campaign:


“The main goal of today’s event is safety. I don’t want anybody to get hit or anybody to get hurt,” Sgt. Ellison told me. "People are slamming on their brakes at the last minute. They’re not looking for pedestrians. They need to increase awareness, pay attention, slow down, put down the distractions, and drive carefully."

As I was leaving the scene of the crosswalk, a group of three people in orange vests had just walked out between the white lines. One car stopped to let them cross the street, but then there was a sudden screech of tires. A taxi — a white minivan — hadn't seen them, and hit the brakes just in time.

As the sun set off in the distance, Sgt. Ellison’s eyes riveted on the cars lining up on Maryland Avenue, fixed in a thousand-yard stare. The last thing anyone wanted was for someone to get hurt.


Apparently, the squeal of tires was a sign of things to come, foreshadowing horror.

The biggest problem that I have with police education and enforcement campaigns is that they have little meaningful impact compared to more concrete solutions, like 4-3 road diets, pedestrian medians, or even (gasp!) speed cameras. These “sleeping policemen work  24/7/365 because they’re concrete and permanent. When compared to the abstract realms of education, “driving culture”, or the ephemeral role of the police in their squad cars, it's like night and day.

It’s not that the crosswalk stings and safety campaign isn’t a good idea, but that without concrete follow-through, they accomplish almost nothing.


4-Lane Death Roads are Still With Us

I’ve written about this before, and apparently I’ll write about it again. Maryland Avenue, where the crash took place this morning, is a classic example of what I call a 4-lane Death Road™.

In short, these are roads that prioritize speed to the point where they're very dangerous. The design features of the road combine into a recipe for car carnage and deadly crashes. While they’re dangerous for car drivers, as crash rates clearly show, they’re especially dangerous for anyone on a bike or on foot. And what's worse, most of the time, these roads run through working class neighborhoods full of children, places with low rents and older building stock that provide haven to many of our city’s most vulnerable and least-enfranchised citizens. 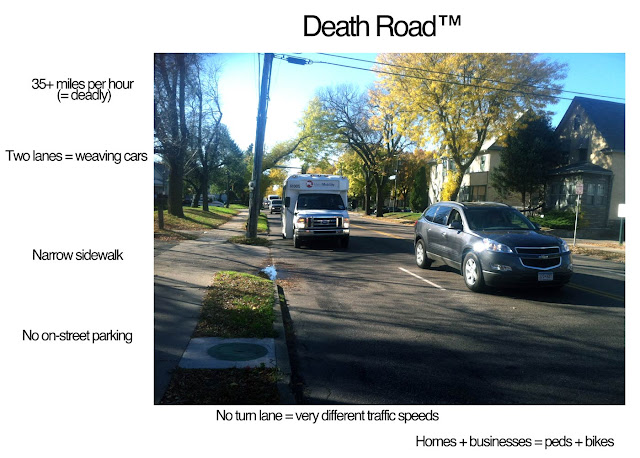 Here’s what I wrote about back in 2014, back when a kid was killed by a driver while trying to get to school across the four-lanes of Rice Street (emphasis added):

When a decision maker says “we can’t do that because of traffic,” to me they are really saying that they value traffic volumes over safety. To me this is morally indefensible, and is not a choice we should be making as a society.
One rarely stated fact about these four-lane Death Roads™ is that they’re often found in our city’s poorest neighborhoods. For example, the poorest part of Franklin Avenue is the part with the Death Road™ design. The Maryland and White Bear Avenue Death Roads™ go through one of the poorest parts of Saint Paul. The Cedar Avenue Death Road™ goes through the heart of the Little Earth and Somali communities. And on Rice Street, where this crash happened,  the death road section disappears once you get close to the Roseville border (wealthier suburb).
These patterns are troubling, but they probably point to the political disenfranchisement of particular areas of the city more than any grand conspiracy toward structural racism. These streets shouldn’t be allowed in any parts of our cities where people walk or bike or have homes and businesses. It shouldn’t matter where you are or how much money you have. These streets are dangerous for everyone, and there should be no excuse for them.


That’s as true today as it was then. Today, if you went to a public meeting and suggested doing a 4-3 conversion on any of these streets, someone would inevitably tell you “we can’t do that because of traffic.”

Currently, almost all of these streets are county arterials (for Hennepin County in Minneapolis, and Ramsey County in Saint Paul).

County public works departments have consistently, continually prioritized “fighting congestion” for people in cars speeding through these neighborhoods over safety and access for people on foot living in these neighborhoods. It’s an upside down system, where the most privileged are placed above the least, where the least vulnerable are given free reign while the most vulnerable are relegated to the margins.

Lately there’s been a push back against the use of the word “accident” in situations like these. Many advocates prefer the term “crash,” because the “a-word” (as it’s known) implies that there’s these kinds of deadly incidents are inevitable and unavoidable.

There’s no better illustration than this morning’s completely predictable tragedy. Every day we let these road designs remain in our city, eroding the safety and quality of life for our most vulnerable citizens, it’s just rolling the dice again. The odds are absolutely stacked in favor of more drivers running over more people crossing the street, and it’s just a matter of time until it happens again.

Education and enforcement campaigns are nice, but the only solution is changing the street. And until our County engineers and officials get on board, this will keep happening, again and again, no matter how many well-meaning signs we hold out along the side of the road.

Every morning I cross a the section of Mnkt blvd that is a 4-lane death road (between France Ave and hwy 100). Crosswalks on roads like these are dangerous because of just what happened to this pedestrian--the blind inner lane. Also cars are prone to rear-ending each other if one stops at the crosswalk suddenly--esp. when traffic is humming at 45 mph instead of 35 mph. Thanks for writing this Bill.

Make sure to turn out for a community forum about how to make Maryland safer for pedestrians on June 9th. Really, the more people who will turn out for this the louder the voice will be to the city and county that these kinds of road designs are not acceptable. We will be meeting in the Arlington Hills Community Center, which is on the same block where this woman was hit.