I was thinking about Mister Rogers the other day, and his striking insistence on using urban frameworks in his show. In Mister Rogers, everyone is a neighbor, and everything revolves around the different levels of neighborhood, from make-believe to the (also fictive) neighborhood in the show. Just like Sesame Street, Mister Rogers’ neighborhood is a lesson about what it means to live in a city. He clearly loved streetcar trolleys, and even had a stoplight in the living room!

It’s tempting to reject the comparison for its explicitly juvenile idealization. We don’t live in a fantastic world full of people singing about their feelings. Your mailman is not actually going to come into your house to watch a videotape he brought over from the library.

But that doesn’t mean there isn’t something basic that Mister Rogers can still teach us. Sometimes, as I sit through meetings where full of people seem driven by distrust, I wish we could rekindle a bit of the Mister Rogers in all of us.

In a way, Mister Rogers is much more “real” than Sesame Street. He actually visits factories and businesses in Pittsburgh. There’s something deeply urban about the show. (Contrast with Pee Wee’s Playhouse, which seems like like a suburban McMansion by comparison.)

For example, check out the "talk about nighttime” episode, which is about overcoming one of the most fundamental divisions in cities, people who are awake or asleep at night. As he describes it,


I've been thinking about people who work at night. Because you know some jobs have to get done in the night time. So while many of us are asleep there are a  lot of people who are up working.

He shows police driving through nighttime streets, hospital workers on the late-shift, and even public works employees fixing a water main. (In a way it reminds me of the passage in Jane Jacobs where she's woken up in the middle of the night by a bagpipe.) 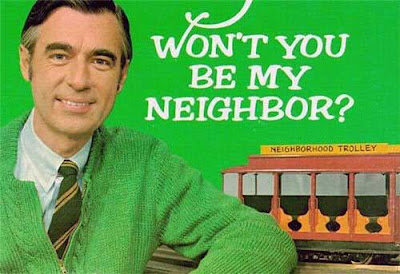 The heart of Mister Rogers’ show is an acceptance of difference, a kindness towards the surrounding urban world and the people that live in it. And in that, Mister Rogers seems like the antitheses of so much of the conversation that happens in actual old-fashioned urban neighborhoods in places like Minneapolis and Saint Paul. If you actually go to a neighborhood meeting, people often seem consumed by knee-jerk negativity.  You're more likely to see Mister Rogers-looking cardigan-clad men and women rejecting the idea of having new neighbors.

I like imaging a world where Mister Rogers runs all the community meetings, sits down with drivers upset about bicycles, or neighbors upset about parking, and talks about sharing.

“There are all kinds of people in the neighborhood, and some of them don’t always drive around," he might say. "Sometimes people like walking, and need to get across all these busy lanes of traffic. And they need to feel safe too.”

Or, “Sometimes the neighborhood fills up with so many cars, and where do you put them? You have to share the street. It belongs to all the people who live here, every single one of you.”

It might see naive, but I’d love if more conversations began with a bit of Mister Rogers’s attitude. Compassion instead of suspicion, the joy of appreciating a beautiful day, of trying new things, of being with other people in a neighborhood full of diversity.

Mister Rogers was the anti-NIMBY.