Public Character #5: Julian, pedicab wrangler and sidewalk concierge, who couldn't Save the Met

The social structure of sidewalk life hangs partly on what can be called self-appointed public characters. A public character is anyone who is in frequent contact with a wide circle of people and who is sufficiently interested to make himself a public character. A public character need have no special talents or wisdom to full his function --although he often does. He just needs to be present, and there need to be enough of his counterparts. His main qualification is that he is public, that he talks to lots of different people. [In front of the Saints stadium entrance at dusk. Small groups of people filter out of the stadium, a few innings before the end of the game. Julian stands next to his pedicab, chatting with strangers]

Two kids passing by: What happened to the bug spray thing?

[Points at the kids, rings bell]

Hey, parking lot express! Express service to the parking lot.
Passerby: Can you give me a ride to Roseville?
Julian: Sure.
Twin City Sidewalks (TCS}: [To a passerby] You need a ride? Best cab driver in town.

Man with kids: Yeah, down to the tailgate lot
[Man and kids get into the yellow pedicab, and Julian starts to take the family down the street.]

Julian: [To family.] You having a good time tonight?

[10 minutes later, Julian returns in his pedicab, rests alongside it.]
TCS: Hey Julian, we got to finish our interview. Give me a little background on your story
Julian: Me? Translated east coast, a guy from Philly 35 years ago, Saint Paul guy ever since. Saint Paul parishes made me feel right at home. Of course they did.

TCS: Why’s that? the cozy nature of it?

Julian: Yeah, the cozy nature, but in Philly we had parishes. Yeah yeah of course we did. I went to Saint Margaret Marys. Once I figured it out, Saint Luke's, Saint Marks, all that stuff, I got Saint Paul. Very easy to do that.

So that’s it. I've done politics, I've done a lot of non profits, I've done Ballpark Tours, I've done the 'Save the Met' routine.
TCS: I want one of those shirts.

Julian: Sure sure. What size you need? XL?

TCS: Yeah, I’ll trade you a Saint Paul flag for it or something.

Julian: Oh really? Yeah that’s a swap. Well what else can I tell you, I brain farted...

TCS: What about pedicabs?

Julian: Yeah, do something green, ride something yellow. They’re transpo-tainment. We do events. Saint Paul is a little bit different. We don’t have enough folks to really make it go on an ongoing basis so we work events. And we got hills.
But you learn, cab drivers, pedicab drivers are like mobile concierges. You can be standing on a corner in a group of people and a guy is going to walk up to a driver and say, Where do I go? What do I do? How do I have fun? You know? Because that’s what we do, we know where everything is. 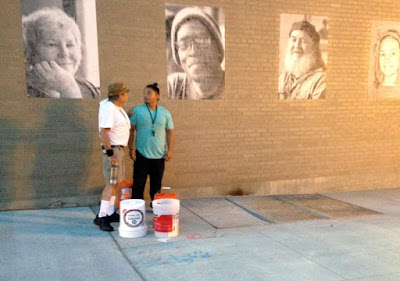 [Looks at sidewalk musician setting up his plastic drums.]
Hold on, I gotta talk to my friend for a moment.

[Julian chats with the young  tub drummer, talks him into moving a bit farther away from  the entrance.]
Julian: [To crowd going past.] Hey express service to the parking lot! Rest those feet!
TCS: Tell me about he Saints ballpark. How that’s going?

Julian: This is just perfect for the Saints and the fans. They thoroughly enjoy the service, especially with parking being a little farther away than they thought, especially for folks from out of town. People forget that it is a decent walk to the ballpark. And you know population is aging, everybody ‘s got more mobility problems...
Two larger women: [Seeing pedicab.] Oh we’re so doing it.
Julian: ... the number of folks who hop into our cab that just had a surgery or something, is pretty amazing. Then the other side is family and friends.
Woman: Hold on, he said six bucks.

Julian: Where to?
Woman: To the parking ramp, right across from …
Julian: The Lowertown ramp?

Julian: Three bucks? Gonna make me work. [Pauses for effect.] Five, ten bucks, we’ll be OK.
Woman: [To her friend.] C’mon Barb. Go with her.
Man: [To woman] I gave her money.
[Two larger women gradually get up into the cab.]

Julian: [Pulling away.] I’ll earn this one, Billy. 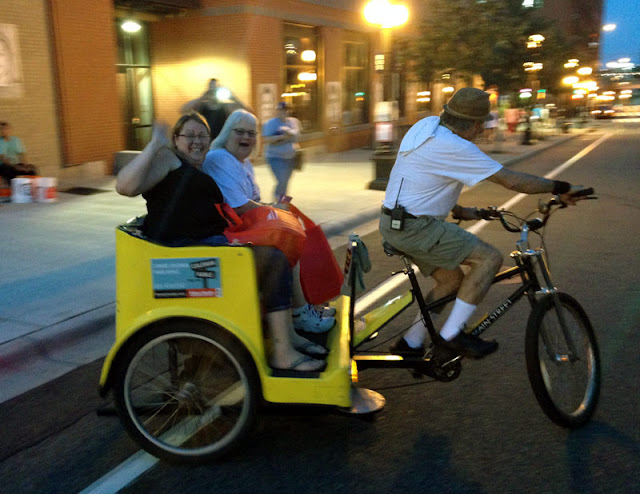