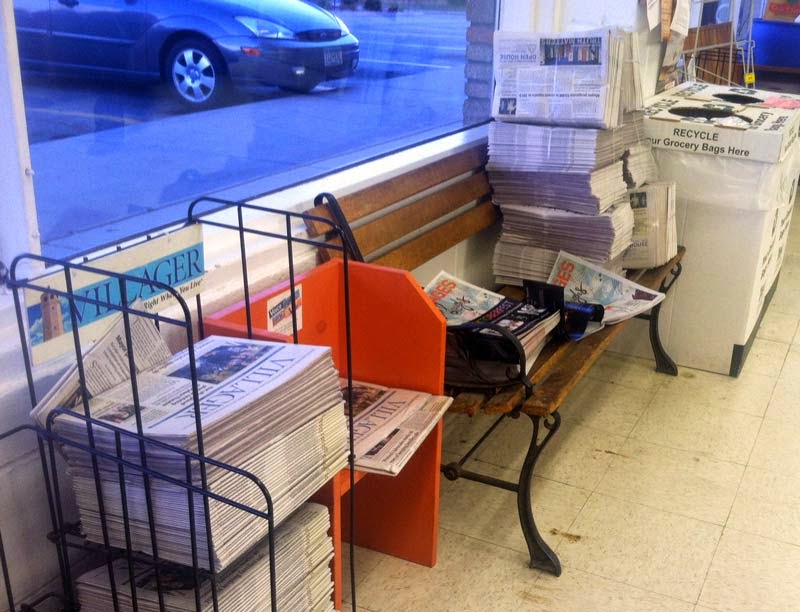 Short short version:The old chain bookstore is becoming a chain "urban" big-box retailer. "Residents are concerned about traffic, pedestrian safety, and parking." [Well, at least they added pedestrian safety to the list! Baby steps, Highland.] There's basically nothing anyone can do as all no permits are required. Best quote: "It's a local store for the local community." [A friend of mine is fond of pointing out how most of the "small businesses" in "Highland Village" are chains. That's not quite totally true, but kinda is.] There is a traffic study in the works [though vague about what it is going to study, or when it will study it]. The "deteriorated information kiosk" has been removed. [Huh? As far as information kiosks go, it was not bad... and I should know because I've been documenting them for  years.] There will be a farmer's market in the parking lot somewhere near there on Saturdays. [Cool!] The business plan is thus: "each TargetExpress wil stock what local residents need." [Well, that seems straightforward. So, it'll sell parking spaces? Anti-anxiety drugs?] That list includes toys. The floor will feature "hickory plank accents." [OK, I'm done. I can't read any more.]


Headline: West 7th Street is reborn as a retail destination; new and relocated stores rise up in the shadows of historic Schmidt brewery
Author: Jane McClure


Headline: City decides to reopen portion of Lilydale Park; area for hiking, fossil hunting has been closed since fatal landslide in May 2013
Author: Jane McClure

Short short version: Part of a bluff park in Saint Paul that was the location of a horrible tragedy [and coverup?] is open again, or at least most of it, i.e. not the part where the accident happened. [Climate change, increasing rainfall, erosion and destabilization, etc. This is a cool part of Saint Paul near where I live. I'd link to think that Saint Paul's unique caves, paths, bluffs, and woods can be used to everyone without the city getting sued and kids dying.]

Short short version: The delegates to the DFL convention in Ward 2, which is an open seat, did not endorese a candidate. [For the record, this is my neighborhood and I am helping with Rebecca Noecker's campaign, and attended this entire marathon affair. Noecker is a great candidate. I'll be writing more about this during the summer, but basically, I'm happy that the party didn't endorse anyone in this open seat. I find endorsements problematic in one-party towns with ranked-choice voting, because they dramatically decrease the number of people who are involved in the democratic process. Also for the record, Noecker was the #1 candidate during every round of voting, achieving 40% support on one of the ballots. 60% is needed for the endorsement. You can hear the speeches here (rewind to hear them all).]

Short short version: A [very strange] city park that is basically a boulevard along University Avenue is going to be "revitalized" and remodeled with new sidewalks "water features" and "art opportunities", at least if they get the $3 million from the city's Capital improvement Budget request. $2M has already been appropriated through the 8-80 funding. Article includes brief history of the park, which dates back to 1910.

Short short version: Saint Paul and Ramsey County want to purchase [and bulldoze] homes at a corner near a freeway and a [soul sucking chain] grocery store in order to expand the road there and build turn lanes, but neighbors are upset about it and the local group voted against it. [In a fit of Orwellian irony] Money for the project comes from the city's [aforementioned] 8-80 funding [which is in theory meant to make the city more walkable but in this case does the opposite]. "A committee" [I'm guessing the "transportation committee"?] voted against the idea. The county needs a year to purchase and demolish the homes [including a mixed-use "apartment-office building] so they need to decide soon. [Bulldozing perfectly good and dense houses and mixed-use fabric in order to make turn lanes... How very 1950s.] CM Tolbert, who originally got the city money for the project, would like to hear other ideas for how to use the $1.5M in 8-80 money. [Paging all 3rd Ward residents; send in your better ideas!] Article includes reference to induced demand, pedestrian safety, and improving the sidewalks over the freeway there. Randolph will be reconstructed regardless in 2016. [Lets not bulldoze homes for onramps any more, Saint Paul.]

Short short version: The city HRA [basically the same as the city council, only with money] is selling land to move a house on Smith Avenue in order to free up space for a [really really old] future brewing building that dates back to 1857. "It is one of only five surviving small limestone houses in Saint Paul." [This is a cool building near my house that I will visit often once it opens in 2017.] The house they will be moving is really really close to the old saloon building.

Short short version: A [right wing, semi-intolerable] bar on Snelby wants to play loud music until 1:00 am, but neighbors want them to stop at 10:00.

Short short version: In Saint Paul, everyone on every block has a different trash truck that picks up their trash, all on different days. [That exponentially increases the amount of wear on the city streets, BTW.]

Short short version: The mayor does not want police to have to wear cameras or live in the city.

Short short version: University Avenue isn't quite the hellscape for people in wheelchairs that it used to be.

Short short version: A landlord who wants to convert an old student rental property from a duplex to a triplex can't because there's no "hardship shown."


Also no Villager at the tea shop, the local bro bar, the diner, or the cute girly gift shop.

Meanwhile, over in West Saint Paul, see picture above.

I don't know what to make of it. It was simply weird. The Villager had been out for less than a week.]