Freeways Are Public Space Too

It’s not every day you see hundreds of people walking down Interstate 35W. But last week it happened, and the recent nationwide trend toward protesting on our roads is a sign that we’re beginning to rethink the politics of roads. We’re beginning to see them as public space.

There’s been a lot of ink spewed over the years about urban design and civil society. A lot of it is semi-naive idealism about New England town hall meetings, or often problematic notions about what is and is not “social capitol.” Talking about the public sphere remains a delicate subject that can sometimes contain problematic notions about what constitutes proper citizenship.

That said, there are certainly lots of ways we can designs cities that improve our political discussions. In lots of ways, protests and public space are the foundation of politics. They can bring people together in ways that are often problematic for profit-driven media. That’s why we need our streets to be places where society comes together.

But it’s very hard to do well. For example, earlier on this site I’ve written about three of my favorite moments in Twin Cities’ protest history, times when the dynamics of public space were thrown into sharp relief. The first was the University of Minnesota student protests in 1972, where students shut down busy Washington Avenue for over a day in order to protest the Vietnam War and the draft.

The second was during Saint Paul's Republic National Convention in 2008, where the police and the national security apparatus took over the public spaces downtown and completely re-made them with fences and checkpoints in order to ward off protest and free speech. To me, these two examples show extreme lengths to which the state can go to foreclose expression in advance in the 21st century.

The most interesting Minneapolis public space moment in my memory, though, has to be the OccupyMN encampment back in 2011. People created a fascinating public space in a spot in downtown Minneapolis, right between the county government center and city hall, that I had thought to be lacking possibilities.

At the time, I wrote that the occupy encampment was easily marginalized simply because of the architecture and urban design of downtown Minneapolis:


Once the workers are gone, there’s no actual “public.” You’re surrounded by terrible architecture, each 80s and 90s office tower blander than the last. The parts of the city that actually have people in them are all at least a half a mile away, over by the stadia and restaurants and clubs and theaters and neighborhoods. The occupiers are easily ignored by almost everyone, which is probably one of the reasons why they’re tolerated (so far) by those in power.

In other words, we’re dealing with the age-old question: if a protest falls in a forest, but nobody is there to hear it, does it make a sound?

As my friend Nathan has argued, protests invariably push the boundaries of what our public spaces can become, activating the edges of social convention and power. During a protest, police power becomes terribly visible. But it's easy to forget that these kinds of power are at work the rest of the time, too. Moments of exception, where a park or a street or a sidewalk becomes contested, demonstrate the always social nature of the city. What a park can become, or how a street behaves, are always open questions rarely asked outside or extreme circumstances.

That’s why it’s fascinating that the recent protests around police brutality have taken to the nation’s freeway system. It reminds me of the protest movement in Bolivia (that I read about years ago), where indigenous activists shut down all the freeways into and out of the city and effectively blockaded La Paz until their demands were met (starting a movement that elected Leftist president Evo Morales).

Unlike the OccupyMN encampment, a protest on a freeway is impossible to ignore, and reveals in an instant how central these massive segregating technologies have become to our cities and society. While these protests weren’t explicitly about automobility or urban design per se, there has been a lot written about the way that structural racism and urban form shape each other.

In short, freeways are not a neutral technology. They empower particular people in particular ways, allowing those with access to cars and suburban privilege the ability to quickly move through the city. Freeways allow us to separate ourselves from the social obligations that come with propinquity. A road like Interstate 35W might seem "natural," but history has shown that they are not, that freeway construction was a massively destructive force aimed at a particular way of urban life that many people of color relied on. Today and every day, freeways remain barriers dividing our cities poorest neighborhoods, and making streets unsafe by privileging the inherently violent technology of the automobile. 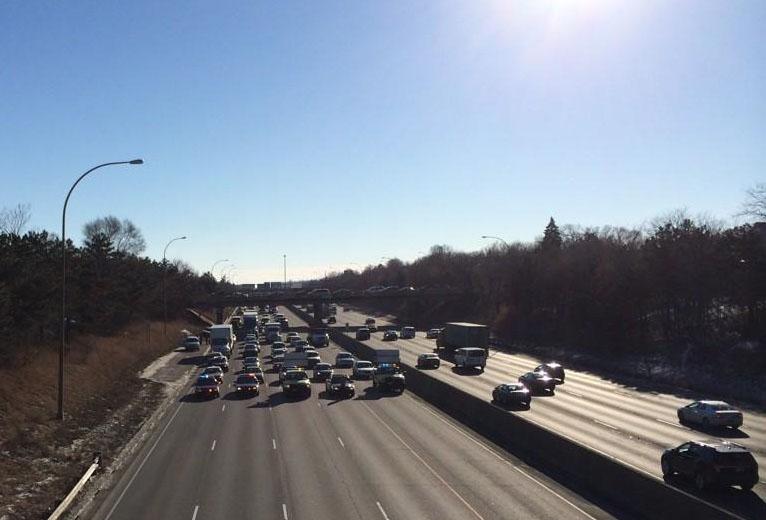 That’s why I’m glad that protest movements around race and justice have found the interstate onramp. Outside of airports, prisons, or military bases, there’s no more tightly controlled space in our cities today. Freeways are designed, regulated, and policed in order to allow only one kind of behavior (speeding cars) and to make all other kinds of social interaction impossible.

I can only imagine how alien it must feel to walk down Interstate 35W in the middle of the day. Once you get on the inhuman thing, you must walk a mile and half before you can return to the city streets. It’s no wonder that these kinds of moments are so rare.

But should these moments be exceptional? Should freeways be part of the discussions about public space and cities, and what kind of social environment we want to inhabit?

No matter how you feel about shutting down the freeway (and some people objected), the fact that last week’s protests began raising the question of freeways as public space is a watershed that reminds me of the Vietnam War contestations before I was born. I’ll be following the movement closely. The next time hundreds of people end up walking down a freeway to prove a point, I hope I can be there with them.