I wrote a piece for streets.mn last week that generated a lot of traction called Four-Lane Death Roads Should Be Illegal. Basically, it was my standard boilerplate rant about street design and the tradeoff between (high-speed) traffic flow and safety for people living in urban neighborhoods.

Then this weekend, the Pioneer Press picked up the thread. Mara Gottfried talked to me about my ideas, and on Sunday a column front page (below the fold) story came out about walkability, safety, and street design in Saint Paul.

This is a long-term issue in Saint Paul, and all across the city people have been working for years trying to figure out how to improve safety for people trying to walk around their neighborhoods, visit businesses, and cross the street. For example, I've been an on-and-off collaborator with the Saint Paul Walks group, which started a "stop for pedestrians" pledge campaign last year, among other things. And there's the crosswalk flag situation going on along Grand and Snelling Avenues.

I'm not really a fan of these approaches, because I think they place too much responsibility (and blame) on the pedestrians instead of the automobile drivers, who are the real danger in this situation. In my experience, enforcement (more police) and education campaigns (like the pledge) have marginal impacts. In the face of a dangerous street design that tells drivers it's OK to speed, text, or eat a burrito, these things won't accomplish much and won't help Saint Paul become a thriving, safe, walkable city. 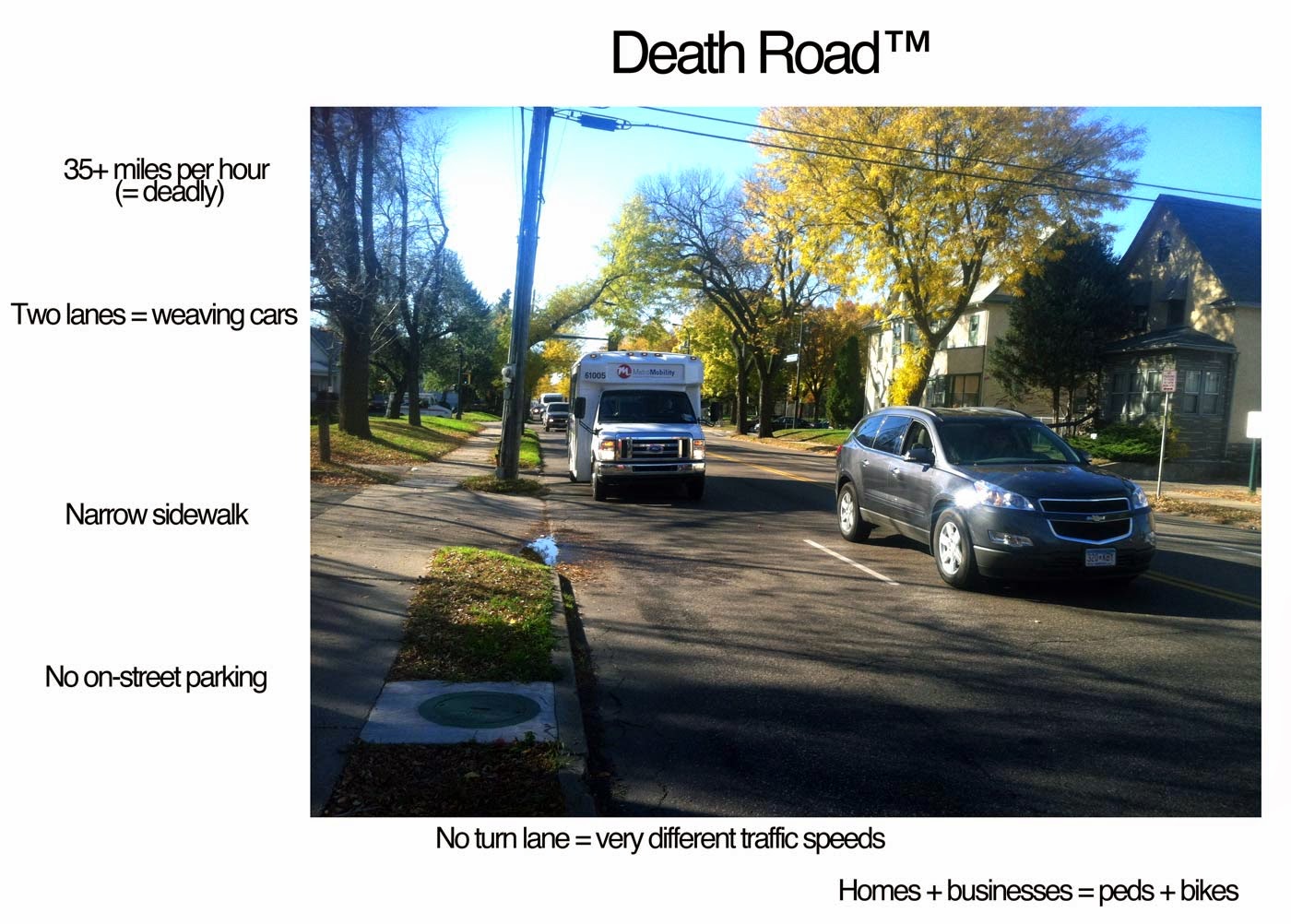 I've written a few times now about why 4-lane undivided (or "Death Roads™") are unsafe and frankly, in my opinion, should be banned throughout the city. I suppose that's an extreme position (though it shouldn't be), but even if you're not willing to prioritize walking and neighborhood safety over traffic flow, we can still have an intelligent conversation about when and where 4-3 conversions might make sense.

For example, here's a comment from someone on the streets.mn post about White Bear Avenue, which I mentioned as an exemplary Death Road™ in my piece:

We have had long discussions in the neighborhood about White Bear Avenue and if it would be better or worse if it was changed to 3 lanes. The bottom line issue is that White Bear Avenue is the only north/south through street between Johnson Parkway and McKnight there aren’t any other options for drivers to choose if they live in that area there is no place else to go. In the District 2/Greater East Side neighborhood there are 28,000 people living between Johnson Parkway and McKnight and between Minnehaha and Larpentuer…. and there are 2,000 jobs. That means its a bedroom community with almost no employment in the area. To live there you work somewhere else and if you do, in the morning and in the afternoon you drive on White Bear Avenue… its the only way out. If we made stacking times longer than they already are the fear is nobody would want to live in the neighborhood.

I don't think this commenter understands the problem very well, particularly since there are many examples of streets that got 4-3 conversions throughout Minnesota and the rest of the country without seriously changing traffic flows. (I'll post about some of these examples soon.)

I'm glad the conversation same up, but I'd be willing to bet that whoever gave a presentation on this topic years ago over-emphasized the congestion and de-emphasized the safety, quality of life, and local economic benefits of the three-lane design.

Where is the Cutoff?

Under most average daily traffic (ADT) conditions tested, road diets have minimal effects on vehicle capacity, because left-turning vehicles are moved into a common two-way left-turn lane.(1,2) However, for road diets with ADTs above approximately 20,000 vehicles, there is a greater likelihood that traffic congestion will increase to the point of diverting traffic to alternate routes.


But here in Saint Paul, as quoted in the Pioneer Press article, the Public Works' department claims:


"In St. Paul, roads with more than 15,000 vehicles traveling on them daily aren't good candidates because that can lead to traffic congestion and backups. Rice Street, in the area of Hoyt Avenue, has average daily traffic of about 15,000 vehicles."


Why this difference? As it turns out, changing the traffic threshold by 5,000 daily cars makes a huge difference because the majority of the unsafe urban streets in Saint Paul and Minneapolis fall into this traffic sweet spot. For example...

As opposed to some really low-traffic streets, fixing these streets might involve changing the balance between high-speed traffic flow, safety, and quality of life. As a city, we need to have an intelligent conversation about what these trade-offs are, and how to value them.

Saint Paul and Hennepin County should increase the threshold where they're favor 4-3 conversions on streets. Even if some traffic conditions become more congested, the trade-off in terms of pedestrian safety, neighborhood quality of life, and improving access to small businesses is well worth it for often struggling urban neighborhoods.

This is the difference between accommodating and prioritizing walking and biking. This is the difference between walkable cities and cities that you want to escape as quickly as possible. Saying that these road diets only make sense for low traffic (under 15K) roads is a cop-out, and fails to adequately value our urban neighborhoods, who are paying the price for dangerous high-speed road designs.
Posted by Bill Lindeke at 11:39 AM

Bill,
Great points! And yes, WB Ave is a death trap. I don't even feel comfortable walking on some of its sidewalks which have no buffer.

I want to mention my bicycle commuting route from WBL depends heavily upon the north end of Bruce Vento Trail at CR D. Unfortunately it requires me to cross a stop-sign controlled 4 lane T-intersection. I've been hit two times over my 8 years of commuting in the exact same spot when heading north (where the van is, https://goo.gl/maps/8qJHZ). Most people roll the stop sign unfortunately. My only solution is to wait for cars to be completely clear - can take a very long time considering all the lanes. My only other option is to assert myself and roll out to the west of the northbound crosswalk which gives me a reaction buffer rather than staying in the crosswalk (DANGER!). I have to cross this way most of of the time to protect myself and so far it has worked very well. Unfortunately, my pleas for better lighting and perhaps a light controlled intersection fall on deaf ears with Ramsey Co/Maplewood.

It's sad to say, but I believe it will take a death to get something done up here it seems. And with more high-density housing and development near this intersection it's only getting worse. Sometimes I go 3 miles out of my way to completely avoid the intersection. How's that for smart trail planning?