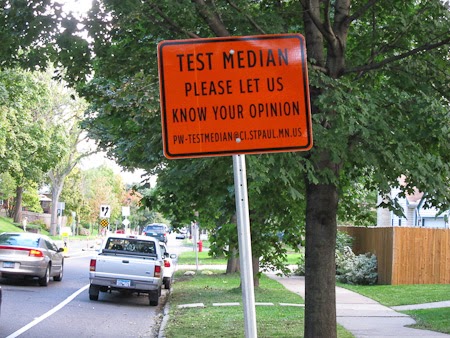 Well, if you've been in bicycling in Saint Paul over the last decade, you have probably been following the Jefferson Bicycle Boulevard fiasco-triumph, which began sometime around 2008 when the NTP project funding landed next-door in Minneapolis.

Here's how I recapped the situation when the proposed project was finally passed two years ago:


... for various reasons the proposed bicycle boulevard down Jefferson Avenue has for few years now been seen as controversial. The project has gone through a few different iterations, and finally now, after a huge number of community meetings involving hundreds of people, and after the city's Public Works department has spent countless hours doing research and analysis, a compromise plan has emerged that seemingly everyone can mostly agree about.This plan isn't perfect. For example, it doesn't include any diverters that are common in bicycle boulevards elsewhere. These kinds of diverters do a lot to move 'through' traffic onto adjacent streets, while making sure that pedestrians and bicyclists can safely cross the busier streets that have higher traffic speeds (such as Cleveland and Cretin Avenues). You can see for yourself how these kinds of diverters work in South Minneapolis, where they seem to have not caused any kind of automotive apocalypse.

Anyway, the final St Paul proposal got rid of these kinds of traffic calming treatments in favor of traffic circles, which you will find elsewhere in the city.


As it turned out, the City Council stripped or delayed many of the proposed traffic circles from the project. And then bids for construction came in too high, which further delayed construction for the Jefferson Boulevard (which has been signed as a boulevard for years already). 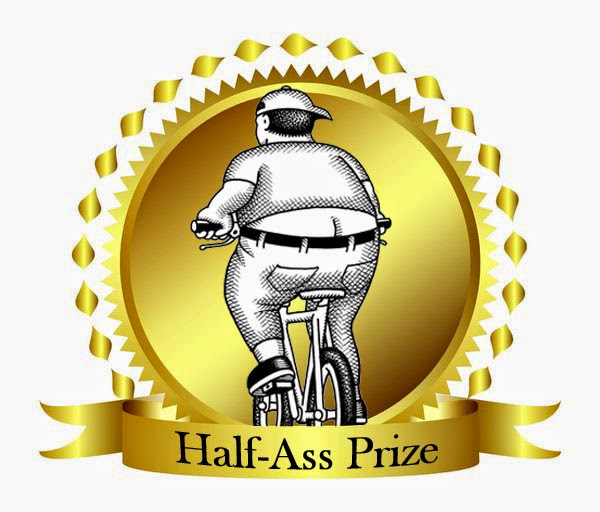 That's why it was delightful to see actual concrete construction on Jefferson this last week. Finally after years of wrangling, hair pulling, elections, FOIAs, shenanigans, and endless histrionic community meetings, two small innocuous flower-planted traffic circles will be built along less important parts of an East-West street that might marginally slow down speeding cars.

Here's the conclusion of my piece, expressing all my hopes and dreams for this street:


I still think this can come true, though I wish this project wasn't the very definition of half-assed bike infrastructure.

Mainly, what these small concrete circles signal to me is how painstakingly slow the current rate of change has become in our cities. While this one project has been kicked to death like a sleeping dog, other cities around the country (including the one next door) have built orders of magnitude more miles of higher quality bicycle infrastructure, literally lapping sleepy Saint Paul.

From one perspective, deliberation is a good thing. We want changes to our city to be aired out, vetted, and presented to the community. We want our officials and engineers to have to answer questions about plans and projects.

But there's a difference between transparency and consensus. I'm reminded of Gil Peñalosa's speech this year at the Saint Paul Transportation Summit (which I wrote about earlier on streets.mn).

I urge you to watch the entire speech, but here's one of the things that he said when discussing a pedestrianization of Nyhavn, a key shopping street in Copenhagen:


Change is difficult, of course. And it doesn't happen by consensus. When they were thinking of making this [Nyhavn] pedestrian, people in these restaurants said "Oh, if the cars don't park in front of my restaurant, we're going to go broke." You have to listen to everybody.

But at the end of the day, what is the general interest? Change will never happen by consensus. If you want change to be unanimous, you have to water down change so much, it's not going to be change any longer. So listen honestly, and then make a decision. Do you think any of these restaurants go broke? 10,000 people buy more food than 83 cars.

So, it's about changing mindsets. And this is why all of us are here.

But this challenge, to move past the desire for continual consensus, is a difficult one for the typically Midwestern mindset. The glacial pace of change on projects like the Jefferson Bicycle Boulevard only serves to highlight this problem.

There are lot of questions that emerge from Peñalosa's advice. How can the city accelerate meaningful change (that conforms with our city vision for the future), without becoming Robert Moses-like despots? How much consensus do we really need?

These are all political questions, but the answers to them do not have to remain in the back rooms and community meetings. I believe that there are plenty of ways to change people's mindsets about sticky problems that don't necessarily need to take the form of elaborate engineering construction or high-blown skyscrapers.

Meanwhile, a couple of traffic circles are popping up in Saint Paul. Soon they'll fade into the background, fill with flowers, and the tempest in the teapot will be forgotten.

Apparently the two bike boulevard projects (Griggs and Jefferson) are far over budget. This will really makes it far more difficult to build any kind of support for future bike projects in the city.

Here's the quote from today's paper:

Two bicycle boulevards on Jefferson Avenue and Griggs Street, which once were projected to cost $1.52 million, are $900,000 over budget.
[...] City staff said the Jefferson and Griggs projects were put out to bid twice -- in the fall of 2013 and spring of this year -- and both times came back over budget.
They said costs went up over the course of four years. A bidding process for the Jefferson project, budgeted at $1 million in 2010, was repeatedly delayed as a result of lengthy public discussion and neighborhood opposition in the Mac-Groveland area.