Tomorrow is your chance to join in on the Overlooked Parks of Saint Paul Bike Tour, part of the Pedalopolis events going on all week.

(Note to Jenny Jenkins: apologies for scheduling this during the Replacements Tour.)

Basically, this tour came out of my curiousity about a series of small parks in the Northwest quadrant of the city. (For example, Iris Park, a former Sidewalk of the Week.) They all have neighborhoods named after them, but these parks don't seem to be very apparent to outsiders. Most people have heard of them, but never actually seen them more than once or twice.

It turns out, these parks have a fascinating history. We're going to bike to a bunch of them and see what's to be scene.

Meet up at the East side of the Franklin Bridge at 6:30. Ride will be less than 10 miles. We'll end up at the Dubliner, most likely. (Not required.) 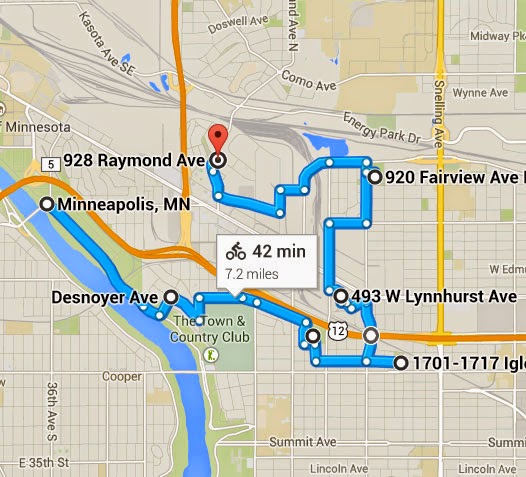 A bike ride to six (6) "overlooked parks" of Saint Paul. This will be a tour of smaller Saint Paul parks you might have heard of, but probably have never visited: Merriam Park, Hampden Park, Desnoyer Park, Union Park, Iris Park and Newell Park. The ride will be hosted by urban geographer and writer Bill Lindeke, who will lead a discussion about the history of these parks, many of which were affected by the construction of the I-94 freeway during the 1960s.

The ride will kick off on the East side of the Franklin Avenue Bridge at 6:30, and will end somewhere near Hamden Park (just north of Raymond Avenue and University Avenue), We will be sticking to lower traffic streets. The total distance will be less thank ten (10) miles, though there are a few hills (because Saint Paul).

To bad I got things tonight (I don't have a bike either but whatever I could drive slow). Would love to hear the spiel on the parks the kids and I frequent...
Freeway Park (Merriam), Soccer Park (Hampden), Secret Park (Desnoyer), and Big Park (Newell - as opposed to Small Park (May) the former site of the Tatum School http://collections.mnhs.org/cms/largerimage.php?irn=10202145&catirn=10823091 just south and west of Newell)

I was busy tonight, too. Next time you should do Langford and College Parks in St. Anthony Park, too. I live right next to Langford and our go-to walk route is the loop around the park. College park is very interesting topologically.

just blogwalking.. Nice post and have a nice day :)