Is the Strib Trolling the Bike vs. Car Fight?

One of the nice things about blogging is being your own editor. You don't have to submit story ideas. You don't have to make unwanted revisions. And you can frame your piece exactly how you like, no editors slapping cheesy or cloying headlines on your copy. Sometimes headlines can steer a conversation in the wrong direction, or change the tone of a piece in ways you don't appreciate.

The Star Tribune had a great article this weekend by veteran reporter Steve Brandt, all about street safety in South Minneapolis. Brandt's piece focused on 28th and Lake Streets, and how they have been the site of a disproportionate number of bicycle and pedestrian injuries and fatalities. This is something I wrote about after the city bike crash report came out, and I'm  reminded about it each time there's another "accident".


Unlike most pieces on bike crashes, Brandt's piece is good reporting because it goes into some of the history of how the streets were designed in the first place. Hennepin County reconstructed Lake Street back in the late-2000s at great time and expense. And as Brandt points out, there was an opportunity to complete a 4-3 conversion that would have calmed traffic, improved pedestrian safety and left turns, and added bike lanes to the whole stretch of the avenue. A year ago I had a conversation with a woman who works with one of the Lake Street business councils, and she told me point blank that Hennepin County screwed up. She believed that today's 4-lane design made it more difficult for local businesses to succeed because drivers were less likely to stop and walk around the neighborhoods. As a pedestrian and cyclist, I agree with her.

Is the Online Frame Shark Chum?

I first read Brandt's piece over a cup of coffee at Mickey's Diner, thumbing through the diner's well-read early Sunday edition. I was impressed, but then I started reading links to it from my Facebook feed. A few people online thought that the article was being "anti-bike" because it seemed question why bicyclists would be riding on Lake Street when the Midtown Greenway was only a block away. 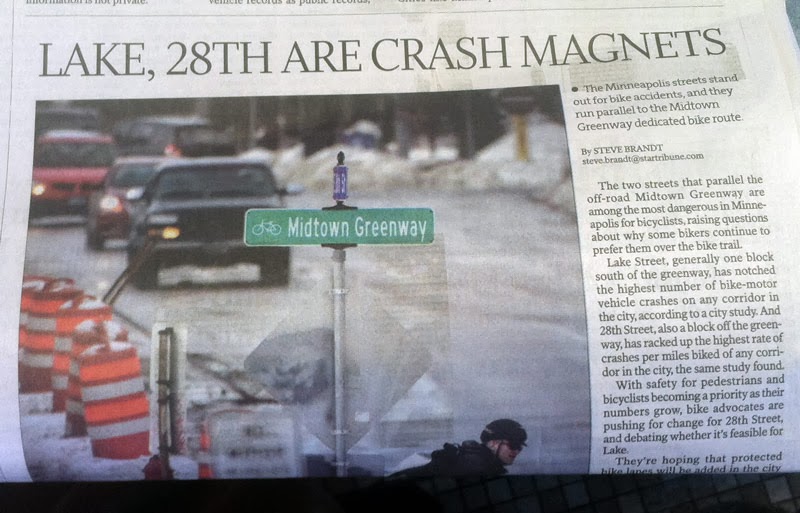 The print edition: "Lake, 28th Crash Magnets: The Minneapolis streets stand out for bike accidents, and they run parallel to the Midtown Greenway dedicated bike route." 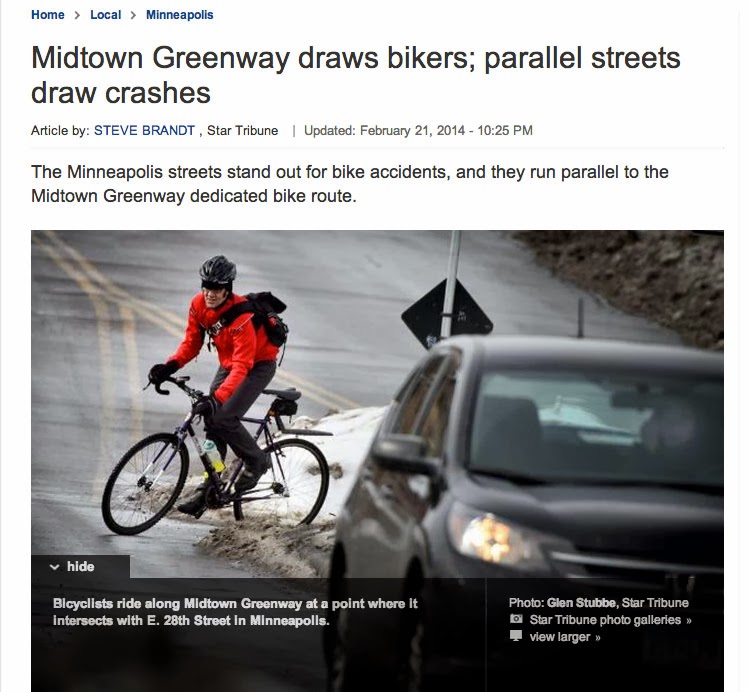 
It's subtle, but the headlines focus on different issues. The print edition asks about two dangerous streets, while the online edition focuses on the Greenway for some reason. The latter headline seems more accusatory. "Why are you on the street, if there's a bike-only route nearby?" it seems to ask. "Are bicyclists partly to blame for these accidents?"

There are a few bicycling issues worth mentioning here. One is the (supposed) "safety in numbers" effect.  Anytime you build a high-quality bike route in an area, you're going to be bringing more bicyclists into that area. And, as Minneapolis Bicycle Coalition head Ethan Fawley says in the piece, most of the trip destinations are on Lake Street. The Greenway and the surrounding streets have completely different functions, and bicyclists should be safe on both.

But the real question is about media framing. There are a few reasons why the print and online stories might be different. There is a bit more space on the internet, where the large fonts of the print edition demands a punchy banner. The audiences are a bit different, too. I'd imagine that the online audience was far larger, and that the print audience was older and had higher income levels.

Frankly I'm not sure. Maybe it's nothing. The headline difference might be a random fluctuation. But if the Strib is framing pieces on street safety to encourage a bike/car flamewar, then it's a real shame.
Posted by Bill Lindeke at 9:48 AM

Thanks for intuiting in your lede the difficulties I had with editors in framing this article.

Is this a problem with the St. Paul Bike Plan - avoiding the commercial corridors cyclists will be going to? Many parallel streets have been selected due to traffic volumes, but bicyclists are going to be eventually making their way to the businesses they're going to, right?