If Cars are the New Tobacco... 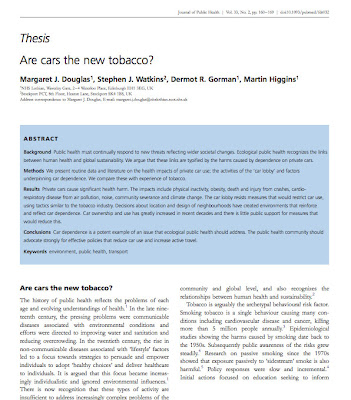 A while back, my attention was arrested by a public health article titled "Are Cars the New Tobacco?" It was in the Journal of Public Health, written by a bunch of researchers from the UK. It basically argued that, now that smoking rates have declined, the new #1 public health risk in the US and UK is the automobile. Here's their main thesis:

This paper argues that private cars share many characteristics with tobacco and could be regarded as the archetypal ecological risk. Like tobacco, cars harm the health of users and others. Moreover, cars damage global sustainability. Like tobacco, car use is seen as an individual choice and policy responses to limit it are resisted by a powerful industry lobby. But it is over-simplistic to view car use as a simple behavioural choice. This paper will argue that the use of private cars reflects and reinforces the physical and social environment that we have created, and that an ecological approach is needed to understand and address the harms caused by car dependence.

In one sense, this is nothing new. Public health professionals have been warning for years about the dangers of automobile-dependent lifestyles. Books like Urban Sprawl and Public Health, or Health and Community Design argue convincingly that the car kills people in many ways, large and small. Cars kill not just by running someone over in a crosswalk, but through their invisible asthmatic particles, and by cultivating a culture of rapid immobility, where nobody walks except to and from the garage. Cars are the new tobacco.

But let's keep the metaphor going. If cars are the new tobacco, what would be a public health solution for the deadly automobile? What if we treated cars like we to cigarettes? What if we used all our anti-smoking tools and waged a public health campaign against cars?

Here's what I imagine:

Cars would come with warning labels. Right on the trunk perhaps, or on the dashboard. It might say, "Warning: Operating this Vehicle is Hazardous to Your Health. Continued Daily Operation of this Machine will Make you Fat and Lazy, and Create an Instinctive Fear the Outside World. Reliance on this Machine will Increase Chances of Heart Disease, Obesity, Diabetes, and an Early Demise."

We would ban car advertisements on television. Direct marketing of this deadly product to consumers, particularly the young, would be seen as immoral and made illegal. There would be no more car commercials, tempting people into BMWs and SUVs that promise impossible freedoms.

We would condemn auto industry lobbyists. Anyone who took one of these jobs, representing a car company in DC or the state capitol, would be treated like the proverbial leper. It would be right up there with the gun lobby or the nuclear weapons industry: about as low as you can go.

We'd start to institute car taxes, special levies on cars designed to make people using cars pay the whole cost of their health impacts. We might even call these "health impact fees." Eventually, filling your tank with gas would be tinged with guilt and failure, with the feeling of knowing that you were doing something bad for your body and for your city. People driving cars would slowly become defensive and bitter, making everyone a tiny bit sadder. 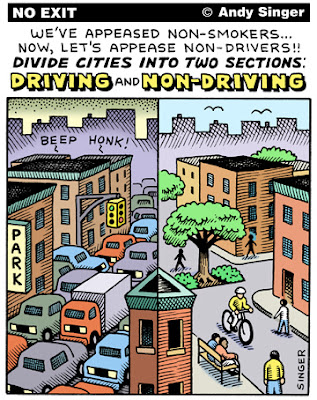 We would acknowledge the harms of second-hand cars. Just like with smoking, cars don't just harm those who use them. Even people who choose not to use cars, who kick their car-dependency, are forced to deal with 'second-hand cars' as they try to walk or bike around the city. Eventually, our society would recognize these harms, would try to come up with rules for limiting the danger of second-hand cars. Which would lead to...

Cities having separate car and non-car sections. Just like how restaurants used to have smoking and non-smoking sections, cities would be separated into car and non-car areas. For car-users, they would have their clogged and dirty streets, but for the rest of the non-car citizens, the dangers of second-hand cars would be eliminated. They'd be allowed to stroll their streets in peace, free from the health effects of the automobile.

Eventually, as people got used to the healthy car-free city, we'd kick our car habit for good. Cities, then entire countries, would institute bans on cars in public places. As we looked back on the earlier era of car commercials and car-inducing regulations, it will seem as ridiculous as old 50s cigarette advertisements, the ones with the doctors in the white coats declaring Winston's to be the healthy choice. Eventually, the car-dependent era will be seen as an aberration, an odd moment in history before people came to their senses.

If cars are the new tobacco, why not?

..... if cars are the new tobacco, there will be too many things also new tobaccos , French Fry, donuts... we need to label all of them with warning,... and have French Fry section, non- French Fry section and donuts section , non-donuts section? Anyway, even we do not drive, do not eat French Fry or donuts , do whatever we can to be healthy , we are still drying from the day we were born... just the speed is different.LOL

yeah, but we don't need to subsidize these things. just as there's no reason the gov't should be devoting billons of tax dollars to the production of cheap unhealthy soda-producing corn syrup, we shouldn't be subsidizing people's driving everywhere either.

Very informative article thanks for sharing this stuff with us also check Top Ten Small Cars Kick Gas Guzzlers to the Curb Funklist!