The story of the St Paul Jefferson Avenue bicycle boulevard is long and ugly, and is finally (maybe) coming to an end tonight. There's a meeting down at city hall this evening, where the City Council is going to most likely pass a compromise plan that strips out a lot of the traffic calming circles from the project.

The Story So Far

The problem is that the idea of bicycle boulevards are relatively new to a town like St Paul. They're streets designed to give pedestrians and bicyclists priority, to calm traffic speeds down to the point where only 'local' traffic is using it. They're intended to create spaces where auto speeds are far closer to bicycle speeds. In theory, boulevards are designed so that cars drive around 20 miles per hour, a speed at which any collision is very unlikely to result in the death or injury of small children, grandmothers, cyclists, or people out walking their dog. In theory, these kinds of streets would be seen as an amenity in the neighborhoods where they're constructed, as they create calm, quiet, walkable neighborhoods, accessible by car, that raise property values and quality of life for nearby homes and people.

Anyway, that's the theory. In the actual real world of Highland Park, St Paul, traffic calming that creates safe quiet streets is perceived as a quasi-fascist assault on the inherent freedoms of the automobile individual. (Or, at least that's true if you get your news from Soucheray.)

That might be exaggerating just a hair, because actually the project has received a lot of support and/or ambivalent shrugs. But for various reasons the proposed bicycle boulevard down Jefferson Avenue has for few years now been seen as controversial. The project has gone through a few different iterations, and finally now, after a huge number of community meetings involving hundreds of people, and after the city's Public Works department has spent countless hours doing research and analysis, a compromise plan has emerged that seemingly everyone can mostly agree about.

This plan isn't perfect. For example, it doesn't include any diverters that are common in bicycle boulevards elsewhere. These kinds of diverters do a lot to move 'through' traffic onto adjacent streets, while making sure that pedestrians and bicyclists can safely cross the busier streets that have higher traffic speeds (such as Cleveland and Cretin Avenues). You can see for yourself how these kinds of diverters work in South Minneapolis, where they seem to have not caused any kind of automotive apocalypse. 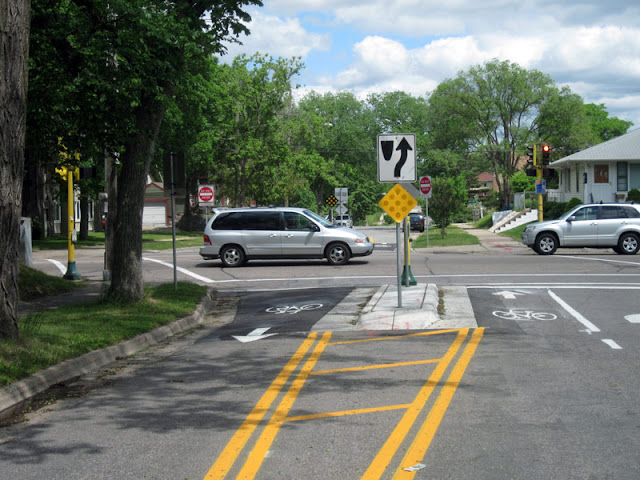 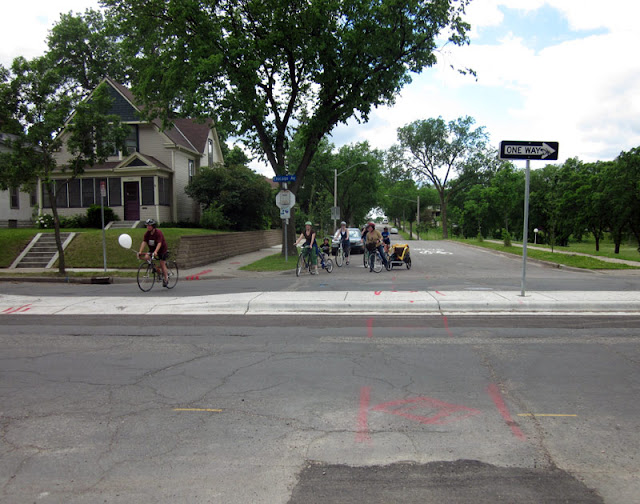 [Another Minneapolis boulevard diverter. Incidentally, neither of these diverters have caused the collapse of freedom and democracy.]

Anyway, the final St Paul proposal got rid of these kinds of traffic calming treatments in favor of traffic circles, which you will find elsewhere in the city. Traffic circles are a good compromise, I guess, because they do a nice job of 'calming' through the use of actual concrete that slows down speeds and makes streets safer for pedestrians and cyclists. Not only that, but traffic circles have little gardens on them! These circles have the potential to turn Jefferson Avenue into the kind of space where your kid might play football (as I did growing up with my brothers and sister on St Paul's Portland Avenue).

Or at least, that's the hope. I've heard that the proposal, passed unanimously through the Transportation Committee and the Planning Commission, is going to be semi-gutted by a last minute amendment during the City Council meeting this evening (5:30 - 6:30, roughly). From what I've heard, the new last minute deal will strip out all but two of the traffic circles from the project, while getting rid of the pedestrian crosswalk signage at the two busy streets, Cretin and Cleveland Avenues. This last minute deal will leave only two real traffic calming treatments on the Western portion of the bicycle boulevard: the traffic circle at Davern street and the one at Finn Street (which isn't scheduled to be built until 2017).


I don't really know the answers to these questions. On the first, I want badly to say "No!" I want to say that the council shouldn't throw over a whole bunch of public meetings in favor of a few opinions of a few decisions makers.

But, on the other hand, most public processes are fraught with problems. If you hold a community meeting on some issue, the people that are most likely to show up are people with a lot of time and/or money on their hands. Those are the people with a voice, that provide "community input."

Meanwhile, not attending the meeting are many other people who almost never participate - people who rent, people with more than one job, young people, people with language barriers. Elected officials need to make decisions with the entire community in mind, not just those people with expensive homes and lots of hard-to-get phone numbers in their phones.

The second question is just as difficult to answer. To my mind, bicycle boulevards are a no brainer. They are streets that don't really mess with the status quo, as people can still drive around their neighborhoods, park on their streets, use their driveways, etc. But they're also streets that really emphasize and welcome the modes of transportation (bicycling, walking) that are the future of our cities. If St Paul wants to attract young people, or be safe for families, or be a place where old people can get around with dignity, they need to build streets that place people first. They have an opportunity to do this right now, basically for free, and it's too bad that it seems like they're going to do a half-assed job of it.

I guess something is better than nothing, here. But I really don't understand why the city cannot pass a common-sense measure that will improve the lives of almost all of the people who live here. Really the only people who 'lose out' when you build a bicycle boulevard are people who enjoy driving too fast through residential neighborhoods. Should we really make public decisions with them in mind?

That's the hope. I fear that today's vote will be somewhat different. It'd be nice if the City Council would pass a plan that really calmed traffic along this route. It'd be nice is St Paul embraced a healthy future.

The council meeting is tonight at 5:30 in the basement of City Hall. Show up and testify if you agree! 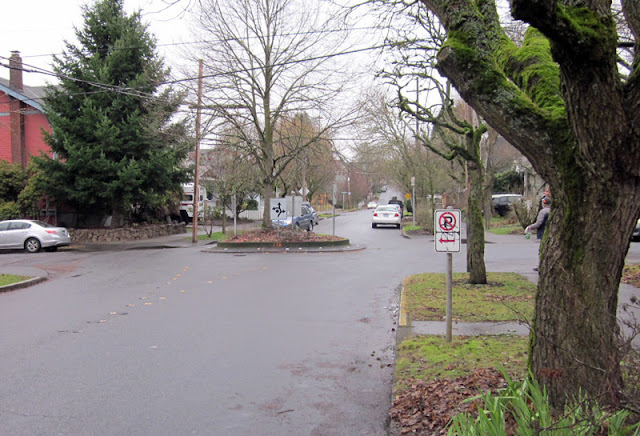 [A traffic circle amenity welcomed by its neighbors in Portland, OR.] 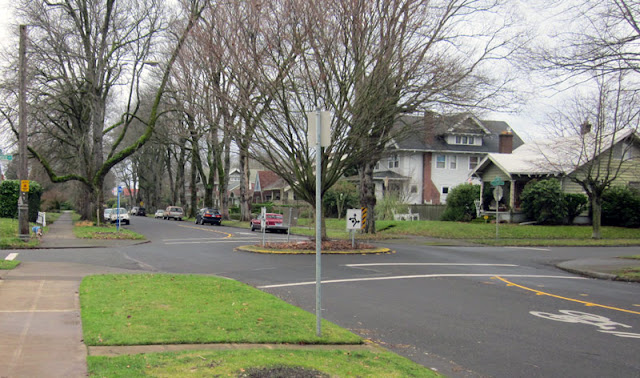 [A traffic circle amenity welcomed by its neighbors in Portland, OR.]

The level of ridiculousness this bike boulevard has reached is immense.

Jefferson has been considered "bike friendly" and a decent cross-city route since the mid-90s. It's not especially high speed (or good for high speed) to start with, and the people racing through are already guilty of traffic violation.

The number of hours of city time, advocate time, and even hater time spent on this is stupid. And ridiculous. And completely insane. If this kind of no-brainer project takes 3 years to come to this point, St. Paul really should just give up. Their zoning and project processes are clearly collapsing on themselves, from projects like this to the Cupcake parking kerfuffle.

Unknown said...
This comment has been removed by the author.
4:34 PM

Maybe if it included a statue of some peanuts characters people would vote for it.

And let's not even mention Ayd Mill Road here.

Ayd Mill: No actual houses with addresses there. Meant to connect 35E and 94. In a damn trench. Nearby residents: Oh no, let's not use this as a road it will ruin the neighborhood! Linear park!

Jefferson: A neighborhood. Low speed limit. Honestly, an area where people have whined about people racing through too quick in cars anyway. But if the traffic calming measure involves traffic circles and those dirty, awful BICYCLISTS? Oh no. We want our street to be a raceway and you are a bunch of oppressive hippies wasting money to try to make our neighborhood street more neighborhoody!

I love St. Paul, but I kinda want to glass it.

For questions 2), I think that if it's gutted, it's not a bicycle boulevard.

I use Bryant in Minneapolis all the time, and, well, it's not any different than it used to be. It's NOT a bike boulevard. (The ones pictured above here are WAY better.)

Jefferson is great for lots of cyclists. I think of bicycle boulevards as places where I don't have to tutor my mom on how to ride them and I don't have to worry about my niece when we're out for a ride. (She's good at riding in a straight line.) Currently, Jefferson (like Bryant) isn't good for that.

Ive followed your blog for some time but this is my first post. I live just off Jefferson near the river, ride it regularly, and was active in the efforts to get the original Boulevard on Highland Parkway. After many angry emails and phone calls from the opposition, I went off the radar screen.

Today, I got an email from a neighbor who invited me to join a Facebook Group called Local Taxpayers for a Livable Community (https://www.facebook.com/groups/localtaxpayersforalivablecommunity/). Assuming it was a group that was open to rational discussion, I asked permission to join and was invited in.

I added one post supporting the Boulevard and the traffic circles and the comments I got back were so over the top I quit after 2 hours. Their minds were made up.

There is so much ignorance over the Boulevard concept and the NIMBY's have been able to fight this every step of the way. I am sorry to hear they gutted most of the good features of it but we will continue to work to improve it.

Thanks for spending the time to do what you do.

How much did the council brag about what progressive innovators they are as they unanimously passed this tiny batch of run-of-the-mill traffic calming that will do basically nothing for biking in St Paul?

This is a really good read for me. Must agree that you are one of the coolest blogger I ever saw. Thanks for posting this useful information. This was just what I was on looking for. I'll come back to this blog for sure! I like this post a lot. I will definitely be back. Hope that I can read much more insightful posts then. Is going to be sharing your wisdom with all of my associates!

wow craighorman! this is the best comment i've ever had on this blog! please comment on every post i do! i'll be sure to enjoy each individual thrill from reading them!

I agree with craighorman - is going to be sharing your wisdom with all my associates, Bill.

Actually, KM, you didn't even need to remove yourself from the group. They're happy to stifle reasoned discussion about this project:

I guess our group isn't for you. Best of luck.

I wrote a short item about the plan back in 2009 and harvested some pretty impassioned comments.

I see nothing much has changed.

Tcsidewalks? I liked reading this and was looking for more post. I have a blog too and consider anyone who turns on comments brave. Good blog!