Minnesota2020's wonderul transportation journalist, Conrad DeFiebre, has a new story out about the big push for raising the federal gas tax. It's an argument I've heard many many times before. It seems that every few months or so, Thomas Friedman calls for increasing the gas tax in his NYT column. Obviously, any sort of freeway construction or contracting firm is pushing for higher road funding. Lots of transportation and transit engineers are calling for it. The energy environmental community wants to see higher gas taxes to drive down demand, and reduce gasoline consumption. Congressman Oberstar hold semi-monthly press conferences to try and pressure the White House into supporting his new transportation bill, which would increase gas taxes and road funding. (And, most of these initiatives also push for increased transit and alternative transportation funding, which is what we really need.)

But, despite all the seemingly common sense, it's not going to happen. DeFiebre offers a good example of how people underestimates the political difficulty of raising the gas tax. Here's what he writes:

Holy Moley, Rocky! What's this world coming to if even people in the oil bidness won't rule out a modest boost in the federal fuel tax, which has been stuck in neutral since 1993? Of course, we've been similarly shocked before: The U.S. Chamber of Commerce, the National Association of Manufacturers and the American Trucking Association also favor raising the gas tax.

Besides the usual reactionaries of the no-new-taxes-no-matter-what crowd, that leaves virtually just one other bastion of opposition to allowing user fees that pay for our roads and bridges to catch up with inflation and the nation's crumbling infrastructure - the Obama administration.

The problem is that the people DeFiebre dismisses as the "no-new-taxes-no-matter-what-crowd" are running the Republican Party, and gaining power every year. And believe me, every even-slightly-unsafe Democratic or 'moderate' Republican who votes to raise the gas tax will be met with a furious flurry of advertisements come election time, all of which say, in large font type, "Congressmember X wants to raise the gas tax".

See, for some reason, the gas tax is a very special case. Sure, no tax is popular. But American drivers are emotionally obsessed with gas prices. We're like quivering OCD stalkers. We are junkies with the DT's. We watch SuperAmerica stations signs like starving hawks. We drive all the way across town to save two cents per gallon.

The reason is simple. When we're standing and pumping gas into your gas tank, its is the most visible, visceral economic relationship we have to our vehicles. You know the terrible helpless feeling when you have to stand there (in an smelly, loud, unpleasant place) and watch the price on the pump go up and up and up ($20 .... $25.04 .... $28.25 .... $32.85.......) (Then there's that terrible sticker that says, limit $100 per transaction, or something like that. I don't even want to think about those people.) There's literally nothing you can do. You are helpless. You have no choice. You depend on your car for every possible kind of activity. Cheap gas is literally (and figuratively) freedom.

How many hours of our lives are spent in dread, watching that awful number get larger and larger? That feeling, along with that infinite minute at the car repair shop where you are waiting for the estimate on the new transmission, is quite probably the worst feeling most people have in their lives. And they would do anything, literally anything, to make that feeling go away. 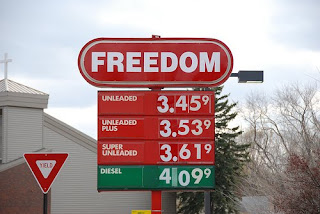 It took a huge bridge falling down into a river to get a tiny hike in the gas tax here in Minnesota, and unless something like that happens for the whole country, there's no way any (non-safe-district) politician will put their necks on the line for this issue. (Hard to imagine what this might be? Lots of bridges falling into rivers?.... Nope. Nothing like that is going to happen.)

In short, as long as American drivers have such rabid attachments to their cars, as long as our heads are stuck up our tailpipes, raising the gas tax is political suicide.

Excellent discussion. We definitely need to get over this fear, develop infrastructure and incentives to decrease commuter driving, and increasing the gas tax is a good way to do this. Are there not also subsidies that the oil industry receives in this country which, if decreased, could free up more transportation funds?

absolutely. that seems like a good way to have a 'gas tax' w/out actually having a gas tax.

GOP got big mileage out of calling the carbon trading proposal a stealth gas tax, and that's one of the reasons it died in the senate.

The chap is completely right, and there's no skepticism.

I wonder if you have more info about the gas tax!