Tales From The Bus #3 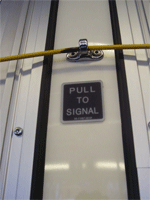 The other morning I took my usual bus ride, boarding the #3B bus in Saint Paul's North End and riding it all the way to Mpls's West Bank neighborhood. It was early in the morning, the sun was not yet above the skyline, and when the slow glowing machine pulled up at the cold curb I was grateful as ever.

But I was surprised when I got on the bus and found it to be different.

Unlike every other bus I've been on in the Twin Cities, for this bus (which wasn't painted like any of the others) the seats were all arranged along the the sides of the walls. Instead of the usual parallel rows of two seats running down each side with an aisle in the middle (like on an airplane, this bus had all the seats in two rows. It had two parallel benches aiming at each other, creating a giant space running down the middle of the bus.

Like everyone else who got on the bus that day, I did a quick double take before beelining for the very back of the bus, where there were some of the 'normal' seats that I'm used to sitting in (the kind where you have two in a row and get to lean against the window).

I found it odd, but was kinda sleepy and paid it no heed. Until, that is, I started to notice how, when people boarded this odd bus, they almost immediately made a beeline for the very back seats (where seats were arranged two-by-two, in the usual manner). In fact, this is exactly what I did...

Now, this is very unusual behavior for a bus. Almost always, people boarding buses occupy the seats beginning with the front, and moving gradually towards the back. But this bus, this odd parallel bus was funneling people down to the very end, down to the back of the bus with its loud engine and large bumps and awkward sightlines and trapped feelings. This bus was workign in different ways! 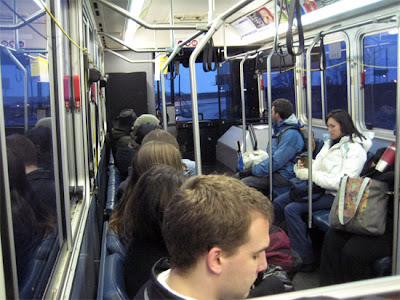 [The bus as it started to accumulate people, a few people sitting comfortably and spaced far apart along the parallel rows of seats, their heads either craning to the side or fixed on the floor.]

Well, this got me to thinking about how this odd bus may be working. I hypothesized that bus design was meant to provide for maximum stuffing capacity, like the subway trains in Tokyo, that this bus would allow for twice as many people to cram the center aisles back-t0-back, and allow the people along the sides to sit fairly comfortably in a way that was perpendicular to the direction of travel.

In fact, I started counting the seats, and began wondering if this bus could hold more people than the traditional two-by-two bus... How many seats were there? How many people could fit into the center aisle? Would the parallel rows of sidewalks seats force people to look at each other? Would the cavernous undifferentiated space of the bus create long and puzzling silences? Forced public interactions? Would people stare at their shoes twice as much as normal?

These questions filled my head like black flies in the August woods. 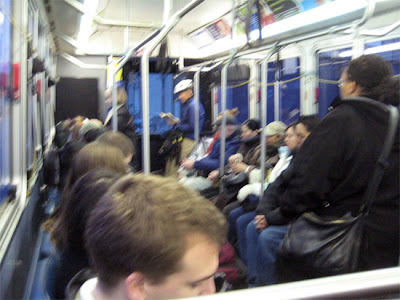 [The bus fills and people clump like barbells on either side of the long awkward aisle.]

Well, I started watching as people got on board, as the bus crawled Westward toward Minneapolis and away from the rising sun. At each stop, another commuter boarded. And the sideways seats gradually filled so that people were almost, but not quite, touching each other.

The next thing that happened was that people started standing. It happened first with a Japanese guy who'd put his bicycle on the front rack, and leaned against the plastic obstruction right by the front door reading a book. Then the next few standers clumped by the back foldy door, and then another stander joined the man in the front.

Nobody was sitting in the in-between seats along the sides, and nobody was standing in the awkward aisle. It was intriguing! 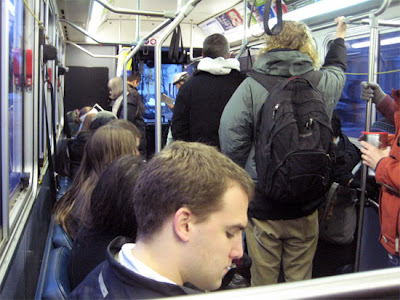 [The sideways seats fill up, and the awkward aisle starts to accumulate warm bodies.]

Well, as the bus started to reach its peak ridership, right before the first stop on the U of MN campus, I was interested in seeing how my Tokyo subway hypothesis would play out. Would people stand two-by-two, thereby maximizing the bus space? Could Minnesotans properly crowd?

Well, as it turned out, as every seat filled and the crunching of bags to bodies started to increase, as people boarded the bus and density reached its climax...

Nothing. There was no crowding, no proper use of the awkward aisle's massive spaces. Instead, people gave each other the regular distance, only this time it was all the more awkward because the people in the sidewalks seats were having to face the folks in the center, averting their eyes, etc.

As it turned out, there was absolutely no point in the odd arrangements of this particular bus, with its sidewalks seats and its awkward aisle.

I got off the bus on the West Bank and went about my day. 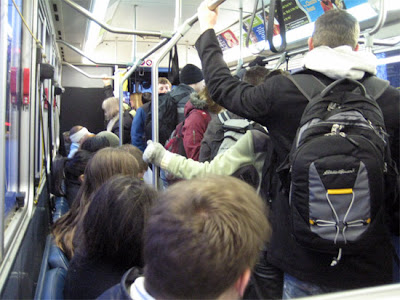 [Full steam ahead in the odd-bus. Nobody moves, for fear of landing on a stranger's lap. Everyone holds their breath until they can de-bus.]
Posted by Bill Lindeke at 10:29 PM

I think this kind of bus is pretty common. Roughly half of the buses here in Birmingham are arranged like this, as are buses I've ridden in Atlanta.

Hmmm. I suppose they must be testing that seating configuration. Not my garage, so I haven't heard about it. Interesting!

I've been on these buses in other American cities, but didn't know there were any running in the Twin Cities. Of course in those other cities people don't have that stereotypical MN reserve; they pack themselves on however they can and there isn't that fear of eye contact thing to complicate matters. Interesting to see how they played out here.

To my mind everyone may read it.

The dude is absolutely right, and there is no question.