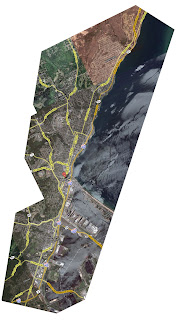 [Duluth is long, dense, and skinny. It's perfect for transit.]
I am in love with Duluth. It's always been a magical place for me, ever since I was a kid growing up in a Twin Cities suburb. Summers can get awful long, particularly when you're stuck in the middle of a continent as big as this one. Land all starts to look the same: trees ground flat house tree flat tree farm cow farm corn tree ground sky tree flat flat corn... &c.

It gets mighty old, and sometimes, to break the tedium, my folks would drive us up to visit my Aunt and Uncle in Duluth, back when Gino's Pizza Rolls were all the rage and Duluth was still an industrial mecca. And it seemed like a magic place, to get on the Freeway, drive until you got bored, stop at Tobie's (back before it became terrible) and drive North. The land gets hillier and hillier, and billboards become more and more frequent, and you go up a rise and down a valley and you feel like any minute you'll disappear and vanish and find yourself over a rainbow in some faraway land.

"First one to see Lake Superior gets a quarter", was the rule of the road, and we'd crane our necks over every rise to try and get a glimpse of the big blue lake stretching off into the horizon. And finally, you'd find that final rise and there it was, Duluth and the Lake! Some sort of industrial Minnesota fantasy of bridges and smokestacks and ships and a big old downtown and giant piles of something or other. And somehow in this flat, flat state you'd find yourself on a giant ridge, with hills straight out of San Francisco, cliffs of old houses and dilapidated Victorians, and Superior Street and the Train Station and the library that looked to my young eyes like a spaceship. 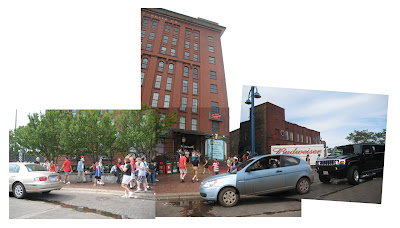 [The place to be was in front of the coffee shop. Cars were lined up around the block just to let people out at this corner.]

Still, though Canal Park was where you went when you got to Duluth. It was this little isthmus in the middle of the lake, the first place you get to where you can actually touch the water.* And it's got that crazy lift bridge, still going up and down each time the smallest and biggest ships shipped along. I've found myself there a few weeks ago, kind of randomly. It happened to be the week that the "tall ships" were visiting the harbor, and Canal Park was insanely packed. I have never seen a place so many cars and people jammed onto such a tiny spit of land...

[There was more jaywalking here than on Leno's show.]

Whenever I've spent a little time in the Duluth (a few days here or there, on- and off-season) I've come away thinking that it could be a great city. At the very least, it could be an ideal college town. The geography of the Duluth site makes it a really compact and dense place, almost perfectly designed for walkability and transit. It's long and narrow, located in a kind of boomerang shape along the harbor. It's a joy to walk around, and has a ton of historical building stock and mixed-use infrastructure. Plus, its situated on a truly unique landscape, probably one of the Earth's most incredible inland waterfronts.

Some of my favorite places include:

[Some of Canal Park's many, many parking lots. They should rename it Canal Parking.]

That said, as its currently structured, Duluth has a long way to go to capitalize on its natural strengths. For some reason, the city built an interstate right through the middle of town (the last few miles of I-35, before it ends in Two Harbors). The freeway, even though its in a semi-tunnel, really starkly separates the lakefront from the downtown, making the large investments like the DECC convention center and the aquarium into underpopulated boondoggles. The downtown has a bunch of skyways, which I cannot believe get much use. Sure it's cold there, but because they split the city's pedestrian population in two, they really make it that much more difficult to revive the economy downtown. 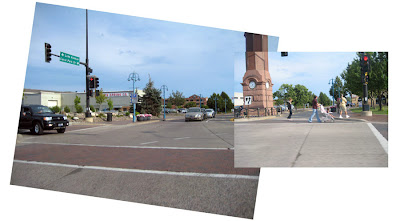 [People scurry across the crosswalk near the Canal Park clock.]

What the city really needs is a way to connect itself more closely with the Twin Cities, and a way to connect the downtown area more closely to Canal Park. It needs to be a place where people can stroll around and wander. It has more unused sidewalk potential than any other place in Minnesota, including downtown Saint Paul. Some transit investment would be a great move, and politicians have been talking for a long time about re-creating a train line that would run to and from the Cities. Bike lanes wouldn't hurt, either. There's certainly plenty of space for them.

I'm not sure how to go about reinvigorating Duluth's sidewalks. What I saw when I was there last month was a tragic misallocation of automobiles. I'd bet that the percentage of the Canal Park ground cover that is devoted to surface parking lots is way over half. Cars were coming out of every corner of the city, and all so that people could stroll around the lift bridge and enjoy the experience of being on a teensy patch of lakeshore. Did they know that there is far more to Duluth than just the Shipping Museum? Give me 4th Street any day over Canal Park.

I realize, of course, that it's a vacation town, and that during the 9-month off-season, Duluth is deader than the late Jerry Garcia. And the terrible, terrible state of the Duluth city budget means that none of these ideas will come to pass anytime soon. They're literally selling the city out from under the people, and laying off half the civic employees to try and fill a huge budget deficit. They are really missing their Local Government Aid.

It makes me sad. I love you, Duluth! I hope you feel better someday.

* What I mean is, it seems like all the waterfront in Duluth is actually used, as a waterfront! Like, they have ships and stuff that ship things using water for buoyancy, and the shorelines are devoted to things that actually use water for practical purposes. As an avid Minneapolis waterfront fan, this is a bit hard for me to figure out.
** Now a "gentleman's club".
*** Miles Davis' Kind of Blue, and Glenn Gould's Goldberg Variations (the second one), still my favorite albums after almost 20 years of near-constant listening.
**** I have never patronized this establishment, but I have taken a tour.
Posted by Bill Lindeke at 8:23 PM

Labels: duluth, family sauna, sidewalk of the week, up north

Hey! Do you know about Gordy's Hi-Hat in Cloquet?

That sounds great. Was it designed by F.L. Wright?

I L-O-V-E Duluth!! Thanks for brightening my day with a feature on the Sidewalks of Duluth! I miss living there and hope to live there again some day.