My Way or the Skyway 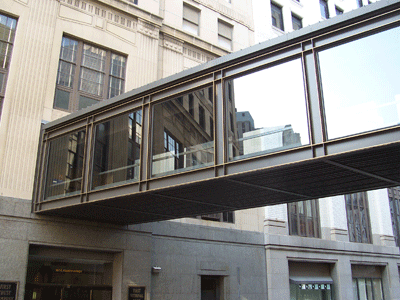 I’ve witnessed variations on the following conversation many times:

Warm State Dweller: “So. Where are you from?”

Minnesotan on Vacation: “I’m from Minnesota.”

MoV [with some puffing of chest]: “Oh, you know. Twenty, thirty below zero. But we like it.”

Minnesotans traveling through Florida, California, or Arizona wear their winter like a badge of honor, and at the drop of a hat they’ll spin yarns of harsh, bitter winters, endless winter nights, and spit-freezing wind.

The embarrassing truth is that Minnesotans have long been on the cutting edge of technological de-winterizing artifice. It’s no coincidence that retail pioneer Victor Gruen chose Edina to as his experimental place to design Southdale, the world’s first indoor shopping center. Minnesotans like winter so much, they want to escape it completely. And, during the many weeks out of the year when it’s very cold out, these climate-controlled environments can drag down our ability to enjoy fresh air and cosmopolitan crowds. But apart from aesthetic pulchritude, these indoor escapes are relatively innocuous. The same cannot be said, though, for the worst artificial environments in the Twin Cities. There is one technology that is singlehandedly holding back our downtown street life, and making it very hard to revitalize our core cities. And that is the skyway system.

Last month I read an obituary of Edward Baker, who was apparently Minneapolis’s visionary skyways pioneer. He built the first skyway in Minneapolis, and helped launch a competitive skyway bidding war between the two downtowns. The 50’s and 60’s saw a escalator escalation as each downtown area tried to out-modern the other, building new, antiseptically-controlled modern office buildings, and installing second-story skyway tunnels throughout their downtown cores.

The thought was that the downtown areas needed to modernize in order to compete with the fast-growing suburbs. This thought wasn’t uncommon. Cities across the country were in the midst of a frenzy of utopian renewal, and the Twin Cities were no exception. Both cities installed dozens of miles of six-lane freeways, while Minneapolis bulldozed the Gateway districts and remade Nicollet Avenue. Saint Paul surrounded its downtown core with freeways, and built a host of new office buildings in the center of the downtown. The thought of creating artificial, climate-free streets high in the air where office workers and shoppers could walk without worrying about weather, traffic, or homeless people had irresistible appeal.

But today skyways are unpopular across the country. Check out this article from the Cincinatti Courier-Journal, or this similar piece from the New York Times. Apparently, the Twin Cities (and Des Moines, Iowa) are the last holdouts in what amounts to a North American rejection of skyways and things like them (e.g. tunnels, downtown atria).

There are three main reasons why skyways are a problem. First, skyways are boring places where you don’t get any fresh air. Second, skyways are privately owned, and feature such amenities as “Hours of Operation” and “locks.” Third, because they are essentially another street suspended in mid-air, they split the pool of potential pedestrian consumers, and make it much more difficult for a business to attract customers.

This last point requires a bit more explanation. What the skyways do is split the pools of pedestrians in downtown Saint Paul into two groups: office workers and everyone else. The office workers exist in the second floor, and there are many retail spaces to cater to them within the skyway system. You can find film development shops, shoe shine stands, lunch joints and little else. All of these businesses close promptly at (or before) five o’clock, and are rarely open on the weekend.

On the other hand, there are a number of street-level businesses in downtown Saint Paul, which exist with separate entrances off the sidewalk. For the most part these are restaurants like Fhima or Mickey’s Diner. But there remain a scattering of other types of places in the downtown area, including a great candy store and a few miscellaneous retailers. These stores serve those few people that come to downtown during the weekends and evenings, and for the most part, the office worker don’t usually patronize these places.

I believe that the skyway system is the main reason why these two pools of customers have separate retail worlds, and if it didn’t exist, it’s likely that many more businesses would occupy the streets of downtown Saint Paul, catering to the shared needs of office workers, tourists, and residents. This increased pool of customers would allow for a greater diversity of businesses downtown, as well as increase the likelyhood of a Saint Paul office worker grabbing a drink or bite to eat downtown after work. Saint Paul's comatose night life might just wake up.

For Saint Paul, the skyway system is a particular shame, because, unlike Minneapolis, Saint Paul has managed to keep a great many of its historical buildings intact. I was in downtown Saint Paul just the other day, and I happened across a group called S.P.A.H. or Saint Paul After Hours. I think some coalition of businesses is funding them, but their goal is to invigorate Saint Paul’s night life. When I was there ther other day, they were throwing a concert in Mears Park downtown that had a decent scattering of attendees (though a tiny fraction of the number that will crowd Loring Park next Monday).

Saint Paul is not a lost cause, and has a lot of potential, but the skyway system will make it very difficult for future development to proceed. It’s no coincidence that the most popular areas of downtown Saint Paul, like Lowertown and Rice Park, are the areas without any skyways. The best thing that the Chamber of Commerce, SPAH, and Mayor Chris Coleman could do is plug up and tear down their skyways, and bring all the street life back to the street.

The Jane Jacobs follower in me definitely tends to agree with your general premise: a skepticism of skyways. But as a sympathizer that knows downtown St. Paul very, very well, I wouldn't get carried away with generalizations.

In general, skyways shouldn't be extended any further, and a few should probably be removed.

But despite my love for Jane Jacobs, I think there is also real value in interconnecting some buildings across the downtown core. Skyways DO make it easier to traverse downtown in the winter, and downtown would be a less vibrant place without skyways.

What downtown needs to do more is clearly connect existing skyways to the street, and focus resources on a dedicated, consistent, long-term strategy for retail redevelopment. And get better signage already.

We do have a problem getting retail to serve multiple constituencies: workers, residents and visitors. But this is a matter of our having concentraed single land uses. There's an entertainment district on the west side of downtown for visitors, a business district in the core of downtown, and a residential district focused mainly on the north and east sides.

That said, skyways bifrucate the office worker market for retail between street and skyway, making retail even more difficult in these zones.

The buildings where these districts intermingle should (as downtown's population grows) be the most viable place for retail. That means places like Galtier Plaza in Lowertown on Mears Park at the end of the primary skyway route through downtown. Or Wabasha Street, where the entertainment and office districts meet, and the topography means what is the skyway level on one side of the block meets the street on the other (Wabasha) Street side.

The lack of retail in downtown is also result of us amputating the old 7th Street, what should have been our "Nicollet Mall". Town Square (1979), the World Trade Center/Wells Fargo Place (1986), and St. Paul Travelers (1991) are the offenders.

The biggest problem for now is that the City has no money. This is important in adding access points, updating signage, and using incentives to refocus retail in areas where skyway meets street, and there are multiple land uses.

That's a great comment on skyways, but I disagree that downtown would be less vibrant without skyways. It would definately be more vibrant, provided there were also street-level businesses. You say it yourself later in the post.

And while Saint Paul's skyways are publically owned (vs. Minneapolis, where I'm pretty sure they're privately owned) that doesn't mean you can get to them after the privately-owned building closes up shop for the day (or during the weekend.) It can be very difficult to access the skyways during off hours, but more importantly, why would you want to?

Thanks for the comment. I wonder if you have any information on what percentage of StP retail is on the skyway vs. street level?

Again, I appreciate your perspective, and am honestly not trying to undermine your basic criticism of skyways. But you did ask why take the skyway at night.

Well, one reason to use skyways during off hours is to get to another part of downtown without having to go out in 100 degree or -20 degree weather, or pounding rain.

I try to use the street as much as possible, but living in one corner of downtown, I not so occassionally find the need to travel to the other, to go to an event, over to a friend's house, etc. I could drive (stupid, and parking isn't always fun). I could take a bus (sometimes not very direct, and/or a long wait) I could walk outside (rain, frostbite and heat exhaustion are sometimes problems) or I could take the skyway (in inclement weather).

You can (with a couple exceptions) always get out of the skyway system through building doors. And there are several access points that allow you in 24 hours a day.

That access keeps people downtown more and helps them move between spheres and between buildings more than they otherwise would.

The challenge is concentrating retail. Mears Park, Wabasha Street, and perhaps a reinvigorated 7th Street/Place in the long term are places where retail can be concentrated, and are located both about where skyway and street meet, and where there are overlapping uses (residential/worker/visitor) that provide multiple constituencies for shopping.

The skyways do need to go, but with a lack of money the first thing to do is to close them. Then slowly dismantle the system. To those that say they add to city vitality they must have never been to another city. Separating work and nightlife crowds into 2 sectors cuts the consumer base in half. Walking downtown is, currently, quite boring. The buildings are not inviting, both as a result of their hugeness and...shit, what does this blog matter, no one will read it anyway!