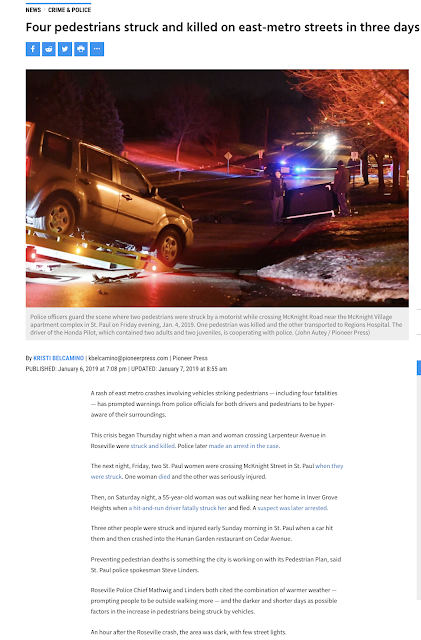 On Thursday afternoon, driver(s) hit and killed Robert Blake Buxton and Meridith Aikens as they were trying to cross the street on Larpenteur Avenue, the border between Saint Paul and Roseville. Just a few days later, on the east edge of the city between Saint Paul and Maplewood, two young students named Zahra Mohamed and Hanan Farah were hit by a driver while crossing McKnight Road. Only one survived.

Here's a quote about the first crash from the Pioneer Press story on the rash of border road deaths:


A rash of east metro crashes involving vehicles striking pedestrians — including four fatalities — has prompted warnings from police officials for both drivers and pedestrians to be hyper-aware of their surroundings.

This crisis began Thursday night when a man and woman crossing Larpenteur Avenue in Roseville were struck and killed. Police later made an arrest in the case.

The next night, Friday, two St. Paul women were crossing McKnight Street in St. Paul when they were struck. One woman died and the other was seriously injured.
...

Roseville Police Chief Mathwig and [Saint Paul Police spox] Linders both cited the combination of warmer weather — prompting people to be outside walking more — and the darker and shorter days as possible factors in the increase in pedestrians being struck by vehicles.

An hour after the Roseville crash, the area was dark, with few street lights.

“I wouldn’t say this particular area is prone to pedestrian crashes,” Mathwig said. “But it is just off a well-lit area, which is Rice and Larpenteur. As you travel away you are going to have less lights and less area for people to be seen, so we would just ask people, especially at this time of night when the sun is going down, to be extra careful as they are driving along the road.”


I have to disagree with Chief Mathwig. These are spots prone to pedestrian crashes. There are hundreds of people who live directly off Larpenteur and McKnight who do not own cars, and depend on transit and walking for their daily needs. These are both areas with undivided four-lane roads running through the heart of a dense mix of affordable apartment buildings, strip malls with necessary services, parks, and other destinations.

For example, Ramsey County and the adjoining cities recently conducted a study of the Rice and Larpenteur area, hiring a consultant to look at how development and the public realm might change in the future. The big takeaway from the report, to my mind, was the complete lack of adequate sidewalks, crosswalks, and safe street designs in the area.  The exact spot where Buxton and Aikens were killed was identified a place that needs safety improvements. People at the City and County have long been aware of the problem posed by these dangerous streets.


My mother recently moved into a condo on Larpenteur Avenue and I've been spending a lot more time on that street these days. I was heading to her home the other night for the holidays, and was amazed to see a figure in a dark coat standing in the middle of Larpenteur at unlit, marked crosswalk, cars streaming by him or her on both sides.

Like many Ramsey County roads, Larpenteur is deadly by design. It has the dangerous combination of a suburban-style road design and a walkable neighborhood. Unlike many suburban arterials farther from the urban core, Saint Paul's border streets are often lined with middle- and working-class homes. The result is a terrible recipe for the kinds of tragedies that claimed the lives of Mohamed, Aikens, and Buxton.

At first glance, these border streets have the added burden of being twice as complicated to fix and manage, where one city is responsible for the sidewalks and land use on one side, and a different city has claim over the other. But in practice, responsibility for both streets falls squarely in the realm of Ramsey County Public Works. (Larpenteur is designated Ramsey County Highway #30, and McKnight is Ramsey County Highway #68.) These streets are Ramsey County problems, and the County should fix them.

Despite adopting policies that, in theory, prioritize pedestrian safety, Ramsey County Public Works has not yet begun to invest in safer streets in practice.  Both spots where the deadly crashes occurred could be fixed to create pedestrian refuge medians. Traffic volumes are not that high at either site, well below the thresholds where "road diets" are impossible, and there's no reason that they need to be four-lanes wide. A road diet would reduce traffic speeds to safe levels, greatly reducing the chances that, if there is a crash, someone is killed. A 3-lane design allows engineers to add pedestrian refuge medians for safe crossing. Together these changes would probably have saved the lives of all of the people killed this past weekend.

It's long past time that we saw on-the-ground safety improvements on Ramsey County streets. It's too late for the poor people killed this weekend, but given the deadly designs of these streets, more crashes are as predictable as the weather.
Posted by Bill Lindeke at 10:43 AM

Maybe I missed it, but, has crossing at designated cross walks been encouraged by traffic officials?

I'm always surprised to see people crossing in the middle of the block!