Sidewalk of the Week: 50th and France 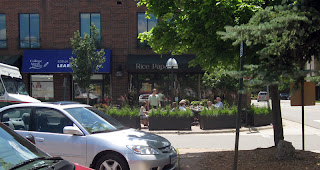 [A sidewalk cafe in a parking lot at 50th and France in Edina.]

For better or worse, today I'm going to write about Edina, despite intensely negative attitudes* that pervade my friends. See, in my intellectual hipster circles, many people make fun of Edina. People often point out that Edina is an acronym that stands for “every day I need attention*.” They then emit a wicked chuckle, jump on their bicycles, and zip off to the Wedge, never giving our poor wealthy suburban neighbor another thought.

Well, I don't truck with that kind of childish behavior. First of all, making acronyms out of someone's name is an elitist, dumb, insipid, negative, arrogant* thing to do.

And secondly, what's so wrong with needing attention? In today's modern era of emotional distance, ideological nihilism, and apathy*, who doesn't deserve a bit of attention? Who doesn't merit some recognition of their basic humanity? And why not demand a level of subject-centered intimacy on an every day basis? This seems to me to be a reasonable request. 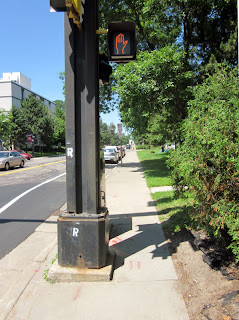 [The Northeast corner of 50th and France is technically part of Minneapolis, its more urban sidewalk beckoning menacingly.]

But at the same time, as an urban geographer well versed in the history of the American urban landscape, I cannot give Edina a free pass. Edina is the Twin Cities' most pioneering exclusive suburb. It lay the foundation for the car-dependent, socially isolating, energy-sucking living arrangements that have spread throughout every last corner of our fair land, lawning and paving as far as the eye can see. Edina and places like it pioneered the indoor shopping mall, the symbiotic golf course, the three car garage, and the interstate strip. By encouraging development in natural areas*, following Edina's lead, US cities after World War II became nothing but enclaves designed in neat arrangements.*

[The local Edina post office is a sea of streets, drive-thrus, and asphalt parking lots.] 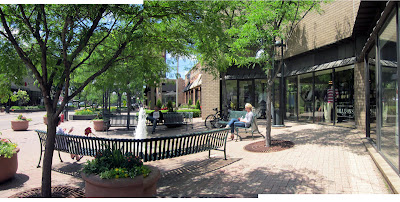 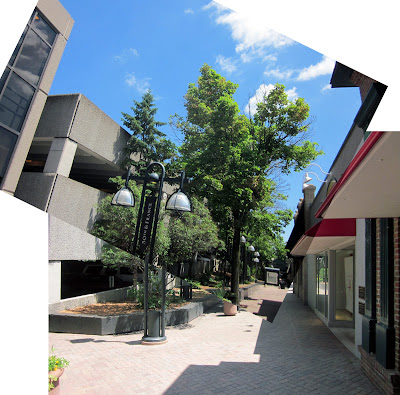 [An alleyway affronting a parking ramp, hidden behind the retail facades.]

These spaces laid the foundation for a form of environment destroying individualism normalized atmospherically.* Even now, Edina has just about the lowest rate of affordable housing for any major Twin Cities suburb, eliminating destitution in name only.** It's a place where every destination involves noxious automobiles,* where the worship of property values encourages Darwinian isolation, narcissism, autonomy.*

Yes, not only do these expensive domiciles inspire NIMBY attitudes,* but economic diversity is not available.* Instead of a mixed group of people from all classes and social backgrounds, you get a land of elderly dowagers in noiseless affluence,* executive dweebs in nauseating abundance,*and a place where even each dog is noticeably affluent.* Thanks to these kinds of cities, exclusive developments isolated nearly all* and elegant demands increased niggardly ambitions,* so that for many people in America today, experiencing diversity is not allowed.*

Edina takes us to a place well within the grip of individualistic culture, as elite developments instill nuisance awareness* such as microscopic attention to lawns and residential density. Elaborate desires inspire nausea, antipathy* to poverty, and more besides. These attitudes easily deepen inequality, naturalizing antagonisms*, marking the modern American city with economic distances involving naturalistic alibis*.

So that's pretty terrible. But 50th and France is different, no? A little island of the city in the midst of the sprawl. It's a wondrous compromise between car-laden consumer suburbia and an urban imaginary that provides not only vague urban status, but attends to many important social needs that are difficult to find in today's suburban environment.

[This is a pretty terrific looking row of shops.]

See, we all live in Edina now. Most of us occupy places that are emotionally destitute, important needs abandoned* to the television and the sometimes suffocating domestic sphere. What 50th and France can teach us is that eventually developers include neighborly ambiance* in their plans. We can learn that even douchebags idolize nostalgic ambulation*, and that in our postmodern world, consumers' escalating demands incorporate naïve alleys.* While its true that entropy didn't invade noticeably anywhere* in the few square block radius of 50th and France, at the very least everyone deserves interesting nooks and* entrances, even those who insist on shopping at Talbots.

As you can probably tell, I felt out of place in Edina. Immediately I knew I was a far too highly educated dork in need. Alone.* Amidst the silent shoppers, I quailed. I just wanted to be a normal individual, despite everything.*** But my head filled with tales of mortgage bankers and investment analysts. I knew they lived nearby. I wanted to fill my lungs with ire and should out, “economic downfall is nigh, assholes!”*

But I kept my silence. I knew that anger was not the answer. Even though a place like 50th and France seems like an elitist development in nearly all* ways, surely everybody delights in neighborhood activities*. And Edina residents are no exception. Even if I didn't really enjoy dallying in nameless America,* I'm glad that a place like 50th and France can provide an important service, in a cozy parking-lot-laden way. 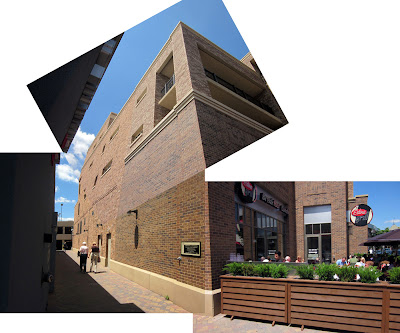 [A couple strolls from a sidewalk cafe down a blank alley to the parking ramp hidden behind the shops.] 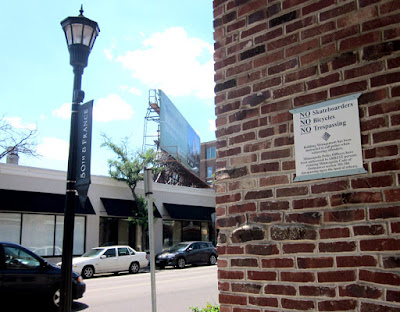 This is one of the funniest things I have read! Great

Really useful info, lots of thanks for your post.