Why the PedalPub is Good for Minneapolis

[The PedalPub on the Stone Arch Bridge -- img. fm Beeractivist.]
I have to say I'm alarmed by this blog post detailing a possible crackdown on Minneapolis's own PedalPub.

Apparently, Minneapolis Real Estate Czar Lisa Goodman may be trying to squelch the PedalPub and its suprirsingly tolerant state statute.

While I've never been on it, I have had the pleasure of seeing the PedalPub go past me a few times while on the sidewalk -- once on West 7th Street in Saint Paul, and the other time in Downtown Minneapolis. Each time I've seen it, a huge smile has cracked across my face. It's so fun to see people traveling at 5 miles per hour through the city and enjoying it. (Compare to this 5 mph experience.)

I'm sure that council members like Goodman see the pedal pub as a vehicle for vagrants, drunks, and assorted riff-raff that slugs about, clogging traffic throughout the city and causing commotion, noise, litter, and untold other public crimes. In other words, it's a nuisance akin to dancing in the streets. 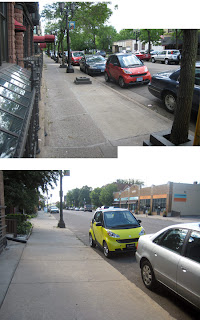 [A pair of Smart Cars spotted along Selby Avenue
in Saint Paul.]
But when I see the PedalPub, I see a real boon to Minneapolis' sidewalks and streetlife. In fact, I'm prepared to argue that the PedalPub is helping Minneapolis businesses, neighborhoods, and pedestrians alike, whether or not they work in the licensed beverage industry. Here are a few reasons why:
The presence of unconventional vehicles on the city streets encourages surrounding cars to slow down, and calms traffic for everyone. And barring the Heart of the Beast bike puppets, the PedalPub is one of the most unconventional vehicles in the Twin Cities. Having a gawky, slow moving drunken crawlmobile well-guided makes makes streets more welcoming for bikers, walkers, gawkers, children, old folks, panhandlers, tourists, and anyone else who isn't rushing along on their commute ...

And, in fact, Minneapolis streets are going to feature lots of different kinds of unconventional vehicles in the future. I'm seeing more and more of them on the streets every day, and higher energy prices will mean more scooters, bikes, motorcycles, electric cars, segways(?), smart cars, buses, streetcars, light rail trains, and probably things we don't even know about yet. I'd say that the era of the monolithic family car is coming to an end...

Much like Connie's Creamy Cone, the PedalPub only pedals from from April to November. (And much for the same reasons... Brrrrr.) Simply put, the PedalPub gets people into the out-of-doors where they enjoy the wind, sun, sights, and sounds of the wonderful city of Minneapolis. This is a rare treat in a land 'o' winter, and we should savor every opportunity. I want to see the city taking advantage of sidewalk cafes, patios, decks, rooftops, parks, kiosks, benches, beaches, shuffleboard courts, and every other chance to innoculate our popualtion against cabin fever.

The PedalPub is not a destination, and the pleasure is all in the journey. As a result, people get to experience, see, encounter, and patronize businesses all throughout neighborhoods. Rather than all going to one "hip" place to enjoy their social time, PedalPub passengers discover the places in between the places they know about. The slow pace of the pub encourages connections between neighborhood businesses, and the groups end up bar hopping and adventuring between businesses in an given neighborhood area. At the very least, this builds a culture of cooperation, rather than a culture of competition in Minneapolis neighborhoods. At the very best, it will help turn places like Northeast Minneapolis into the next well connected place to be.

[Witness this excruciating video of a PedalPub clogging up traffic in Amsterdam.]

The PedalPub is a concept from Amsterdam, one of the world's most walkable cities that boasts with some of the world's most loved sidewalks and streets. Short of legalization of certain substances and activities, you'd think Minneapolis would be doing everything it can to become more like the Dutch.

In fact, I think that the City Council should buy a 13-seat PedalPub where they could hold their meetings. It could be steered by Mayor Rybak, and would take Minneapolis Council Members straight to a walkable, civic, and environmentally friendly future at a stately 5 miles per hour. Plus, there can be no doubt it would greatly boost the City Council's popularity.

I think it'd be a damn shame if the wet blankets on the city council succeeded to bottling up the (open bottles) streetlife of the city. The Pedal Pub is a great symbol of tolerance, neighborhood, street life, and publicly-condoned intoxication. Surely there's room on the street for everyone.

Interested in helping the PedalPub preserve its future in Minneapolis? Take a moment from your busy day to write to your City Councilwomen Lisa Goodman and Elizabeth Glidden; share with them your positive stories about the PedalPub.

Well I'm convinced and will have to try out this PedalPub before the cold returns. I hope you sent this to Goodman, and that you post the response.

ashlie j. said...
This comment has been removed by the author.
8:25 PM

oh god, pedal pub?! i can't wait to move up! i hope it lasts, how hilarious!

on a side note, in savannah we have similar traffic woes with the horse drawn carriages and huge tourist trollies meandering about. for the first, i feel awful for the horses and hate to see them with their bent backs dragging fat tourists around in 100 degree weather, on cobblestone streets no less. for the second, the gawking tourists make me feel like i'm in a zoo while i'm trying to enjoy a drink outside my favorite coffee shop. and of course, we all know a little exhaust goes along great with an iced latte!

but pedal pub?! what a great idea! people can actually enjoy themselves while interacting with the outside world instead of lazily sitting back as if the city of interest were some kind of alien planet or zoo, requiring intense observation to understand the oddities of this "new" place. (oh my gawd, people WALK around here?! look at all the trees!)

why must people (ie: city governments) unequivocally support horrid tourist traps with no imagination or life? yet all the while, they attempt to squash something that has real value beyond a simple (and plummeting) dollar?

okay that was a rant. i guess i just hate when touristy activities detract from the quality of life (especially street life) in a city. sounds like pedal pub is a great option for tourists and locals alike.

It's all good! We can pedal on!

Check out the MNBeer site for the deets.